Now on DVD: THE BEST OF THE ORIGINAL AN EVENING AT THE IMPROV, Reliving The 80s, One Comedian At A Time 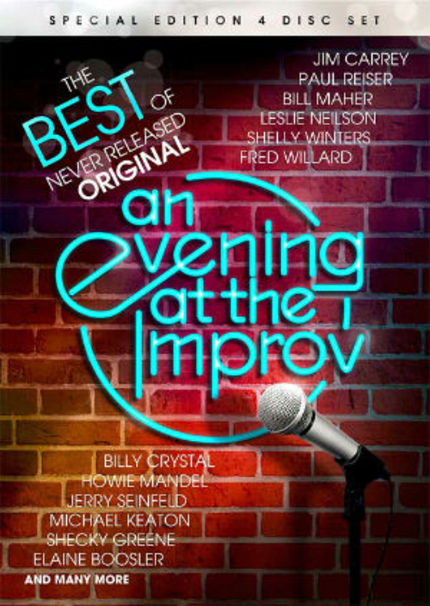 Debuting in the fall of 1982 on the A&E television network, An Evening at the Improv featured a variety of stand-up comics doing their routines before an audience at a Los Angeles comedy club. Now 12 hours of material from the series has been collected together for a 4-disc set from Somerville House, out this week on Region 1 DVD.

Coming early in a wave of similar shows that swept through broadcast and cable networks in the 80s, An Evening at the Improv featured Budd Friedman, who founded The Improv in New York in 1963 and opened a Los Angeles location in 1975. Friedman introduced a co-host for each weekly show; the co-host served as master of ceremonies, doing a bit at the top of the show and then introducing each act.

The 34 co-hosts represented on this DVD set are certainly an eclectic bunch, ranging from Mort Sahl and Milton Berle to William Shatner (who tries to make reading names from a telephone directory funny) to Christopher Lee (who does impressions of Daffy Duck and Yosemite Sam).

More than 70 routines are included -- some of the comedians do multiple sets, spread out over different DVDs -- and a wealth of now-familiar names can be seen early in their careers. Many, like Jerry Seinfeld, Paul Reiser, and Billy Crystal, are well-honed joke machines, while others are pleasant surprises. Michael Keaton -- misintroduced as "Keating" by co-host Phil Foster -- does a marvelous bit with an existential reading of a "Bazooka Joe" comic, and another where he riffs on a family trip, shifting easily from one exaggerated character to another. The second routine by Robert Townsend features Keenan Wayans an an unidentified assistant / on-stage accomplice, deconstructing the act as it happens.

Great comics have great timing, which means I found myself laughing at plenty of old jokes, but the topical nature of much of the material dates it to its time period. And for every comedian who went on to a movie and/or TV career -- Jim Carrey, Paul "Pee Wee" Reubens -- there are two whose names and routines are entirely forgettable.

I watched the first disk of the set, containing about three hours of material, straight through, and then spent another three hours or so sampling comedians and hosts from the other three disks. To some extent, it's a nostalgia trip, but the nature of DVD makes it incredibly easy to skip from routine to routine with the press of a key on the remote control. Each disk has a menu listing each host and comedian, as well as a listing for musical guests (two per disk), which tend toward the soft-rock, easy listening variety.

The material, all in standard definition, is presented in its original aspect ratio, which is to say 1.33:1, and the sound is mono. It may not be pretty, but nobody ever said comedy had to be pretty, just funny. And the set delivers hours of comedy that's probably best appreciated one or two comedians at a time, which makes this 4-disc set ideal.

The set can be ordered via Amazon and other online retailers.

Do you feel this content is inappropriate or infringes upon your rights? Click here to report it, or see our DMCA policy.
An Evening at the ImprovBilly CrystalcomedyDVDJerry SeinfeldJim CarreyMichael KeatonPaul ReiserThe Improv