TIFF 2013 Review: KILL YOUR DARLINGS Presents A Woefully Clumsy And Shallow Hagiography Of The Beat Generation 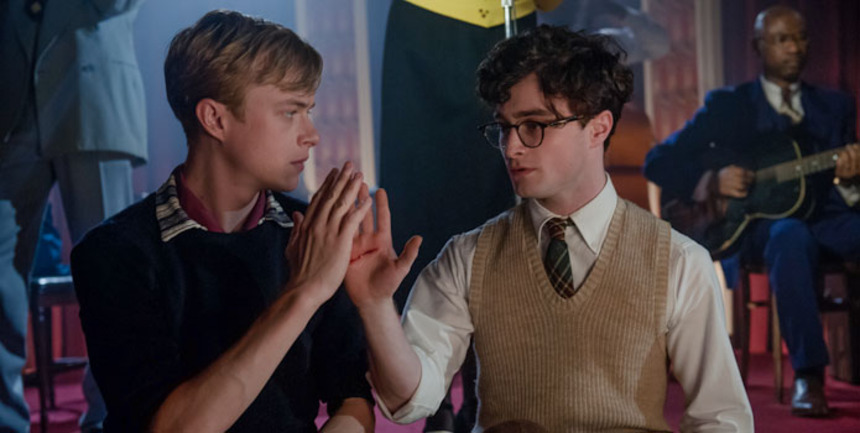 Seldom, if ever, has a film taken such potent source material as does John Krokidas' Kill Your Darlings and proven itself so completely and utterly clueless as to what to do with it. Krokidas here tackles the rise of the Beat generation, specifically Allen Ginsberg's entry to college, his early relationships with Jack Kerouac and William S Burroughs and - much more to the point - the entire group's involvement with young Lucien Carr - to whom Ginsberg would eventually dedicate his signature work Howl - and Carr's killing of his older gay lover David Kammerer. A true story this lurid populated with such larger than life - and yet completely true life - characters would seem to be a sure hit, such fascinating material could not possibly go wrong. And yet it does, and badly, because writer-director Krokidas is simply not up to the task as either writer or director.

Kill Your Darlings fails on two very fundamental levels. First, it never seems to know what it wants to say and so it says nothing at all. And, second, not knowing what it wants to say it seems to have no clue about how it wants to say it (or not), either, and self destructs in a sea of conflicting stylistic urges. Is this Ginsberg's story or Carr's? It never commits and is never a satisfying portrait of either. Is this a coming of age story or a slow burning true crime thriller? Again, it never commits and so fails at both. It offers nothing but the most surface treatment of any of the characters, none of whom develop or advance in any significant way - Ginsberg's gains in confidence are completely rote and unengaging - with the script offering only the barest of sketches of some of the most iconic figures American literature has ever known. Is it a proper period piece or a hip, anachronistic re-imagining of the era? It tries to be both and is therefore neither, and what the hell was Krokidas thinking when he put Bloc Party remixes on the soundtrack? Hell, if that was his attempt at being current he's ten years too late for that, too.

Kill Your Darlings is, frankly, such a mess that it's nearly impossible to offer comment on the performances. Dane DeHaan is an utterly vapid nothing as Carr but Krokidas' script gives DeHaan zero beyond vapid nothingness to work with, so is that DeHaan's fault, really? Michael C Hall manages to elevate at least a couple of his scenes as David Kammerer but the only moments that really seem to rise above are the interactions between Jack Huston (Boardwalk Empire) as Jack Kerouac and Elizabeth Olsen as the object of his turbulent affections, Edie Parker. Ben Foster is fine as William S Burroughs but all he's really ever asked to do is talk in a funny voice, which hardly even counts as acting.

And then there's the elephant in the room, the only real reason the film exists and the only real reason anyone is ever likely to pay to see it, that being Daniel Radcliffe as Allen Ginsberg. Specifically, Daniel Radcliffe as Allen Ginsberg experiencing his homosexual awakening. Radcliffe is fine but the treatment is, again, quite surface though Radcliffe proves he's not shy about challenging his Boy Wizard image with both a male on male kiss with DeHaan and another more explicit - though not remarkably so - sex scene after a random encounter.

Kill Your Darlings should be so much more than it is. It is a cavalcade of tragically missed opportunity, a film that takes a trio of the most vital, energetic, anarchic and gleefully elemental forces in the history of American letters and reduces them to a slightly more druggy, slightly more libidinous version of Dead Poets Society. The waste is tragic.

More about Kill Your Darlings