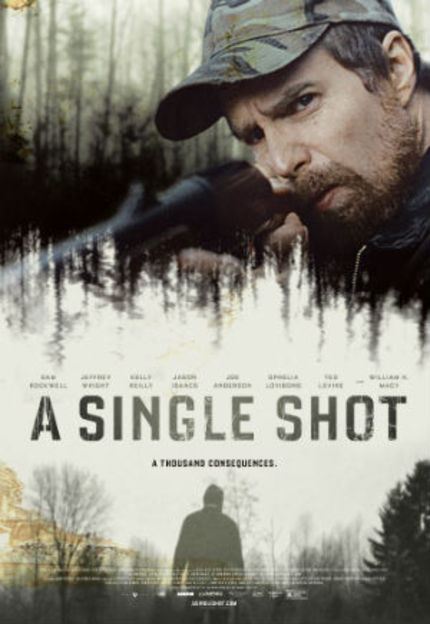 Briefcases full of money are bad news. Terrible news, even. If you see a briefcase full of money, run as far away from it as you can, and maybe stay inside for a few days just to be safe. You will not get to keep the money. Others will die because of you, and ultimately, you will die too, probably in a grisly fashion. After No Country for Old Men, A Simple Plan, Fargo and, thematically speaking, Treasure of the Sierra Madre, this advice really should not need repeating. In fact, for years, movies have hammered away at this theme more consistently and mercilessly than almost any other.

And yet, here we go again.

The hapless suitcase-full-of-money-finder in A Single Shot is John Moon, a bearded, down-and-out would-be farmer played by Sam Rockwell. He stumbles upon this particular case after accidentally shooting a young woman while illegally deer-hunting. At first, it seems like the film might follow this intriguing plot thread, and focus on the guilt and mishaps resulting from his decision to cover up the accident. But almost immediately, he finds that money, and the whole hunting accident problem goes out the window.

To be precise, it is more of a metal box full of money. Naturally, Moon is down-on-his luck, going through a divorce and in desperate need of the cash. Naturally, he immediately goes around town spending it and handing it out to pacify people that he pisses off. And, also naturally, we soon find out that the money belongs to someone dangerous, and that they've figured out that John has it.

It's a tried-and-true formula which has been retold and re-imagined many times, often extremely effectively. Curiously though, A Single Shot adds nothing to the genre, except for stupider-than-average characters and enough back story to fill another movie. And, at nearly two hours, it's also far too long for such a familiar tale. It lurches from one plot point to the next like an apathetic factory-worker -- getting the job done, but slowly, and without any enthusiasm.

The excellent cast at times offers some relief from the doldrums. Rockwell plays his hangdog bumpkin convincingly and without overdoing it, though, behind his overgrown beard, his eyes still radiate with the energy and charm we usually expect from the actor, which are occasionally at odds with his character. William H. Macy and Jeffrey Wright both have great fun as a gregarious lawyer and a perpetual drunk, respectively, and Kelly Reilly proves that she has enough screen presence and skill to make even underwritten roles memorable.

The dialogue, especially the rural vernacular, is also quite sharp at times, though in a much more grounded way than, say, that of the Coen Brothers. And while the film doesn't exactly impart any new insight on small town life, it certainly sets the dreary mood effectively. Most of the action unfolds in some perpetually dark-blue part of the day -- like magic hour, robbed of all its magic.

But in the end, none of these admirable elements create any real emotional resonance, or connection with the material. At best, wondering how they all might have played out in a more interesting script provides some mild distraction while the film takes its precious time lumbering towards its telegraphed ending.

Review originally published during the Berlin International Film Festival in February 2013. The film opens in select U.S. theaters nationwide on Friday, September 20. It is also available to watch via VOD, iTunes, and other on demand platforms. Visit the official site of Tribeca Film for more information..

More about A Single Shot