Review: I AM BREATHING, Dying Is Difficult, In More Ways Than One 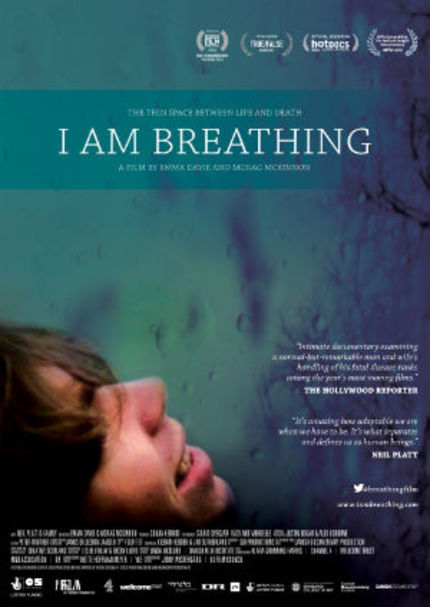 The terminally ill Neil Platt, certain that Motor Neuron Disease will kill him within the year, is determined to preserve something of himself for his toddling son Oscar. He records a daily blog of his thoughts, encourages his family to videotape him, and exploits every possible method he can think of in order to ensure that his personality will be transmitted from beyond the grave. I Am Breathing is a synthesis of these efforts, and its unevenness is an example of why the reality of death confounds any attempt to present it in a straightforward manner.

Emma Davie and Morag McKinnon's documentary doesn't have any artistic pretensions of explicating the 'grand theme' of the death of the father. The subtext is there, but the style of the film is humanistic and practical. When dealing with death as a subject matter, it is common for work to employ spiritual or symbolic themes because this is when these digressions seem most appropriate. But I Am Breathing uses Neil's dry wit and practical personality as a structuring principle to good effect, and we are for the most part spared the metaphysics. Neil is most often seen joking. His determination to soften the tragedy for his son is a primary goal of the project, and the filmmakers follow suit.

But however much we enjoy Neil's personality (he's a likable guy), the grim specter is still there. The labored breaths and machine rhythms of the respirator are the rhythm of the film, and the drab suburban living room in which poor Neil stares out the window is his world. There are many times while watching this very personal film that I felt uncomfortable. Of course, in some ways this is intentional (who can watch a documentary about someone dying and not feel uncomfortable?), but in other ways it is not.

I Am Breathing requires a substantial investment of care from the viewer and it attempts to elicit this by simply showing Neil's life before and after the onset of his illness. If you are unable to identify with some of the nostalgic elements of the film, you are likely to feel bored, then guilty for being bored, then uncomfortable. This unpleasant sensation has nothing to do with death or Neil. It's a reaction to the film itself.

This documentary is intended for a wide audience, but Neil is explicit that his effort to transmit his personality from beyond the grave is intended primarily for Oscar. He makes lists of "Things Oscar should do in my stead" ("exploring castle type stuff") and addresses the camera head-on as though we are his son. The mounting pressure of time running out coupled with the impossibility of completely transmitting one's whole life experience leads the filmmakers to sentimentalize mundane acts like eating fast food and watching TV. Neil says "There's nobody on this planet who will understand what it's like," which sadly is true. While we may be able to identify abstractly with the concept of 'a father dying' and with Neil's valiant effort to communicate, I found it difficult to invest myself emotionally in a project that takes so few aesthetic risks.

Visually, the documentary is what you might expect of a project based on a blog. The many shots of a blinking cursor and computer screen are realistic in terms of Neil's life, but very drab onscreen. Much of the footage comes from the home videos shot by Neil and his family, and this has a nice fluidity and personality that makes the footage added by Davie and McKinnon seem overwrought. The filmmakers are very good, however, at keeping the mood from getting too down by filling the movie with Neil's sense of humor. Ultimately this is what saves the film and what made his blog appealing subject matter in the first place.

One important question is raised in the movie that is never dealt with adequately. Neil's father died of MND at an old age, and Neil is dying of it at 35. Does this mean that Oscar is doomed as well? Of course, the family prefers not to consider this, but I can't help wondering. It is implied that Oscar is at a high risk, but the film doesn't investigate the family's feelings about it. Oscar is treated onscreen like an empty receptacle for his parents' dreams and anxieties. Because he's a toddler, he seems oblivious to what is occurring around him, but there is a darkness in his future that the film prefers not to explore.

"The freedom to communicate is the strongest and most powerful freedom," Neil Platt says toward the end. Believing this, he becomes obsessed with putting his existence into words and images. By means of his affable personality and access to modern technologies, he is able to enlist a large group of people to assist him in his cause. The result is a very personal film that will be invaluable to his son and very moving to those who are able to invest in it emotionally. More cynical viewers and those who are unable to identify with the plight of an affluent British family man are advised to approach with caution.

The film is now playing in New York at the IFC Center, and will open on Friday, September 13 in Los Angeles at Laemmle Music Hall. Visit the official site for more information.

Do you feel this content is inappropriate or infringes upon your rights? Click here to report it, or see our DMCA policy.
DocumentaryEmma DavieMorag McKinnonNeil PlattBiography