Review: HERB AND DOROTHY 50x50, Cleaning House And Sharing Art With A Smile 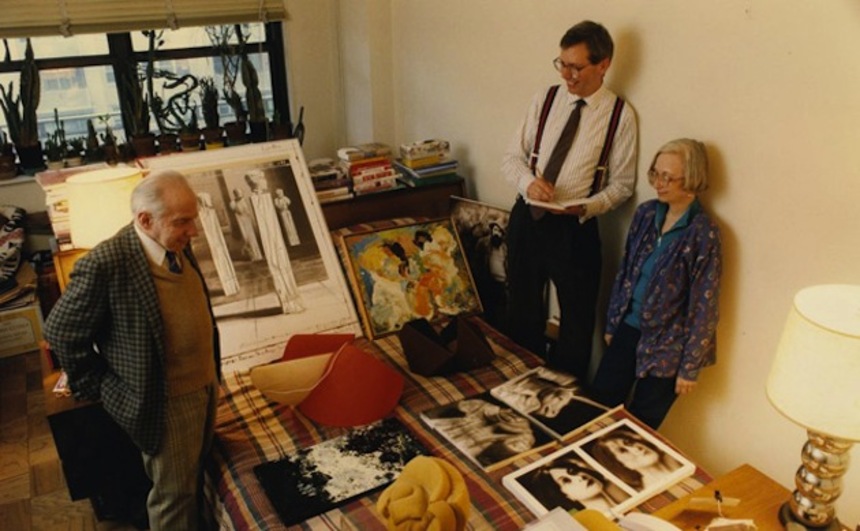 Artists aspire to immortality in strange ways. The struggle to locate one tiny bit of infinity within a creation of a human mind can be a funny, bizarre and occasionally tedious experience to watch. Thankfully, Herb and Dorothy Vogel have no such aspirations. They understand people and pieces of art have different lifespans. After fifty years of  cramming their tiny apartment with all the contemporary art that could fit, Megumi Sasaki's Herb and Dorothy 50x50 documents the couple's declining health and their decision to get rid of it all.

Herb and Dorothy 50x50 is more of a companion piece to Sasaki's earlier Herb and Dorothy than a sequel. Both films are about art and accessibility. The Vogels' entrance into the annals of art history (detailed in the first film) by way of coupling a postal worker's salary check with a lot of creative thinking and old fashioned monogamous support is a nice American tale of the least offensive kind. The art world is usually only accessible to the very wealthy or the extremely hip and Herb and Dorothy are neither.

Over the course of fifty years the Vogels participated in art by means of buying very small pieces and forming relationships with artists. Their collection has become a living thing- "the whole collection is their masterpiece" says Pat Steir. 50x50 deals with the dismemberment of this collection and its dispersal in equal chunks to each of the fifty states. Although some artists like Richard Tuttle bemoan breaking up the Vogels' stash, it's clearly the healthy thing to do. Canvases spill out from beneath the bed, cats maneuver daintily through minimalist sculptures and paper is stacked to the ceiling. Art is one thing, hoarding another. By sending fifty pieces each to the fifty states, the Vogels' figure out a way to revitalize their collection. New experiences with old art are what Sasaki is after, and the film is a document of the process of making that happen. The opening of images children filing into a museum are significant.

In many ways, 50x50 works as an educational film. This has its drawbacks (the only time you'll be at the edge of your seat is if you're slipping out of it in a mild doze) but, considering the source material, it's a good route to take. Many of the pieces Herb has collected deal with openness. "Any response you have to this work is valid" as various docents explain to gaggles of onlookers staring at weird drawings on antiseptic museum walls. Children gravitate to the simplicity of many of the pieces in the same way that adults often feel turned off by it. "A lot of works in our collection are not easy to like" Herb explains, and the film is great at showing that a person's response to this kind of art always says more than the piece itself.

It's easy to wish the documentary had some of the playful experimentation with form and concepts that the collection itself does. Museums in 2013 have an image problem. Between children and the over-40 crowd there is a large demographic of people who tend not to engage with art presented in the sterile manner of the museum. A crowd of teens is shown just once in the film staring on apathetically as a good natured docent tries to goad them into any kind of response. 50x50 does its best to show artists, art collectors and museum curators and attendees in a positive light, but in the transition between Herb and Dorothy's apartment to the museum wall not a little bit of vitality is lost. The curators know this: a few of them attempt to recreate the Vogels' living room as part of the display, but the pristine chairs and fake cats capture none of charming mess from which the collection originally sprang.

It's clear the film is more concerned with the practical problems of how people and institutions interact with (and store) art than with the lofty notions of that art itself. In the end, the human elements are the most satisfying parts of the story. Watching Richard Tuttle gingerly turn his watercolor blob on lined notebook paper and speak grandly about narrative is funny; Charlie Klough awkwardly acknowledging his current obscurity is slightly sad. While it may be boring to watch septuagenarian Dorothy navigate museum websites in real time, watching her take charge of the collection's dispersal is a good example of how any interaction with art in the film is positive. While Herb's sense of satisfaction came from collecting the work, Dorothy's comes from getting rid of it. The fact that so many anonymous strangers get to see it makes her happy. Collections may have a slightly longer lifespans than humans, but in the end even they get torn up and dispersed. If inspiration catches and spreads, well, that's the closest you'll ever get to immortality I suppose.

Herb And Dorothy 50x50 opens in L.A. and surrounding areas today and continues its roll out across the U.S. throughout October. Click here for additional dates.

Do you feel this content is inappropriate or infringes upon your rights? Click here to report it, or see our DMCA policy.
artherb and dorothy 50x50megumi sasakimuseumsthe vogels