Review: THE CANYONS Embarrasses Everyone Involved, Except Lindsay Lohan 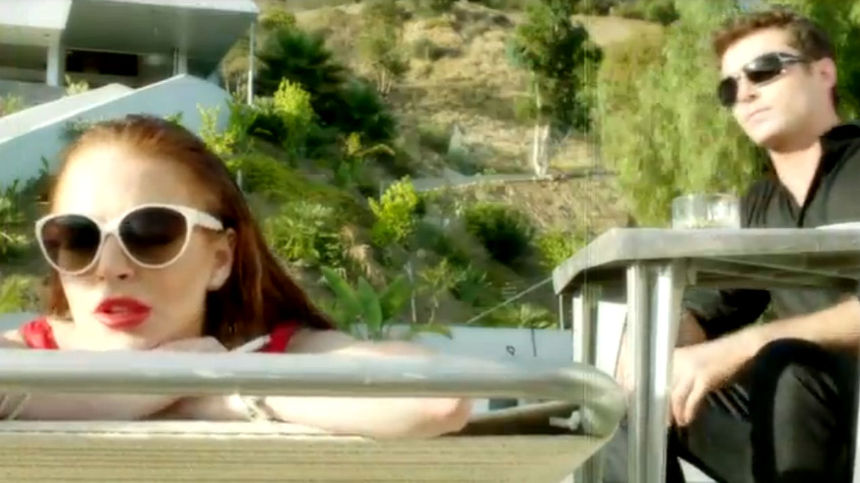 So... did you hear about the time that author Bret Easton Ellis (Less Than Zero, American Psycho) and director Paul Schrader (Mishima: A Life in Four Chapters, Cat People, screenwriter of Taxi Driver) decided to collaborate on a crowdfunded movie and cast Lindsay Lohan and a porn star named James Deen in the lead roles? If not, your reaction to the film in question, The Canyons, may vary greatly from mine. Credit my biased expectations to the engrossing, tightly-written New York Times Magazine article  which actually makes good on it's sensationalist headline, "Here Is What Happens When You Cast Lindsay Lohan In Your Movie."

Like many films plagued with production problems -- Just try watching Brian De Palma's The Bonfire of the Vanities after reading the unsparing account of its bad-to-worse production in The Devil's Candy -- The Canyons feels disappointingly lifeless when taken in context of its dramatic, mishap-plagued genesis.

Or maybe it's simply not a good film. It's certainly not sexy, thrilling or even insightful, though I suppose it's arguable that Schrader and Ellis actually intended for it to instead feel empty, dull and off-putting. After all, these are the words normally reserved used to describe the privileged L.A. world that Ellis became famous for simultaneously condemning and fetishizing in his novels. Still, even if you give it a pass on this front, it still doesn't excuse the non-stop expository dialogue or the fact that the entire thing still feels like a tame daytime soap.

Pretty much every plot point is communicated through text message, phone conversation or a face-to-face meeting completely devoid of subtext. Very little happens. The film is actually constructed mostly out of scenes where people stand or sit in a location talking, and scenes where they drive or walk somewhere while ham-fisted electronic music plays in the background.

But maybe that's the point. Maybe every dull, obvious creative choice is deliberate and meant as a reflection of the world and characters Schrader and Ellis are dealing with. In hindsight, the myriad driving scenes and text message chains seems a bit funny on paper, considering the milieu... but it's still a slog, and I can't say that I've changed one iota after sitting through it.

The film comes to life, however, when Lohan is on screen. Personal problems be damned, the woman has a natural screen presence and the talent to exploit it. Her nervous, edgy, half-broken performance feels at times on the verge of catharsis, and she injects the lifeless dialogue with depth that for which Ellis didn't seem to have planned. As a result, the only times the film rises above it's soap opera trappings and begins to feel like something bigger and more professional are the scenes where Lohan gets to show her stuff.

It's not some once-in-a-lifetime performance that makes The Canyons worth seeing, but it is quite good. And if anyone's street cred actually ends up benefiting from the film, it will probably be hers, and not Schrader's or Ellis'. But again, based on the aforementioned NYT Magazine article, I'd still rather see the making-of documentary.

Do you feel this content is inappropriate or infringes upon your rights? Click here to report it, or see our DMCA policy.
bret easton ellisJames Deenlindsay lohanPaul SchraderThe Canyons