Review: GETAWAY, Trapped In A Muscle Car In Bulgaria 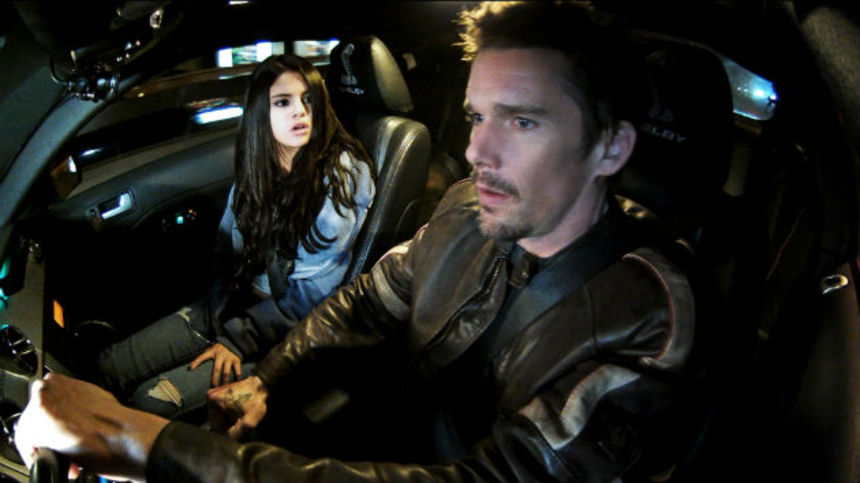 His face is kept hidden, but his all-purpose Eastern European accent is distinctive -- and his name is third-billed in the credits -- so I believe it's safe to say that's Jon Voight providing the evil narration throughout Getaway. From an objective viewpoint, the only thing 'guuud' about Getaway is that its running time is barely 90 minutes. But that's about 88 minutes longer than I wanted to spend in close proximity to the occupants of the American muscle car that is the true hero of the movie, enduring countless inflictions of damage upon its exterior and yet somehow emerging triumphant in Sofia, Bulgaria.

Not to be confused with Sam Peckinpah's The Getaway, nor with Roger Donaldson's The Getaway, and certainly not with the source material for those two movies, a novel by the great Jim Thompson, Getaway has been directed by Courtney Solomon (An American Haunting) with a clumsy, headache-inducing found-footage vibe, created by extensive use of tiny cameras mounted inside and outside the aforementioned American muscle car ("a custom Ford Shelby GT500 Super Snake," according to the press notes).

The experience of sitting through the movie is akin to strapping on a helmet and shin guards, and then being trapped in a metal popcorn popper, where one's brain is battered and bruised while an annoying young woman is constantly yapping next to you and that blasted faux Eastern-Europe voice constantly orders you to fling yourself into the vall of the popcorn popper.

Ethan Hawke gamely struggles to control his emotions as the muscle car's driver. The hapless fellow washed out of a promising career as a professional race car driver, and then did things he wasn't proud of, he admits, before turning straight and moving with his wife to her hometown. She has been kidnapped, and now he must follow every command of the mysterious voice if he ever hopes to see her again.

Initially, the voice commands that the driver steal the muscle car, and then drive it very, very, very, very fast through the streets of Sofia, turning whenever and wherever indicated, no matter the risk to innocent bystanders, ignoring all property damage incurred. Then a young woman (Selena Gomez) brandishing a gun unexpectedly jumps into the car and, oh, what does it matter? 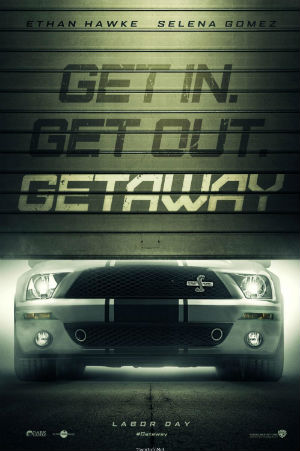 The screenplay, bearing the names of Sean Finegan and Gregg Maxwell Parker, cobbles together a plotline and skeletal backstories for the key players, but the film's raison d'être is the action, and Mr. Solomon's instinct is to weave a blanket of coverage from all those tiny cameras. In bursts of 10-20 seconds, this might provide a degree of variety in a traditionally-shot car chase sequence, but the percentage is flipped, so that 85-90% of the chase scenes are presented in micro-bursts of extreme close-ups. This ruins the possibility of understanding the geography involved, especially since the bulk of the film is set at night in a city with unfamiliar landmarks.

Thus, the tension never builds because it's impossible to determine the stakes involved. Dozens of vehicles are smashed up, pedestrians are constantly running for their lives, and it all passes by in a dizzying assault of partial images, blurred lights, and the near-constant screeching of a panicky young person.

Given that he's strapped into the driver's seat for most of the running time, Hawke does a reasonable job of conveying his character's five shades of grey. Gomez is properly annoying, but when she reaches for dramatic heights, there is nothing there but a blank stare. Voight oozes menace with his voice, but it's a silly role and he's called upon to play games that are neither clever nor inventive.

Near the end of the movie, dawn breaks and an extended sequence is shot low to the ground, from the point of view of the "custom Ford Shelby GT500 Super Snake." Finally, I could follow what was going on, and get a peek at the geography, and have a reason to care. All too soon, the sequence was over, but it was a reminder that old-style car chases still have much to teach modern filmmakers. And all the tiny cameras in the world won't change that.

Do you feel this content is inappropriate or infringes upon your rights? Click here to report it, or see our DMCA policy.
car chase moviesCourtney SolomonEthan HawkeJon VoightSelena Gomez

Just saw Before Midnight. Ethan Hawke should do more movies that showcase his acting. He is great with the right material.