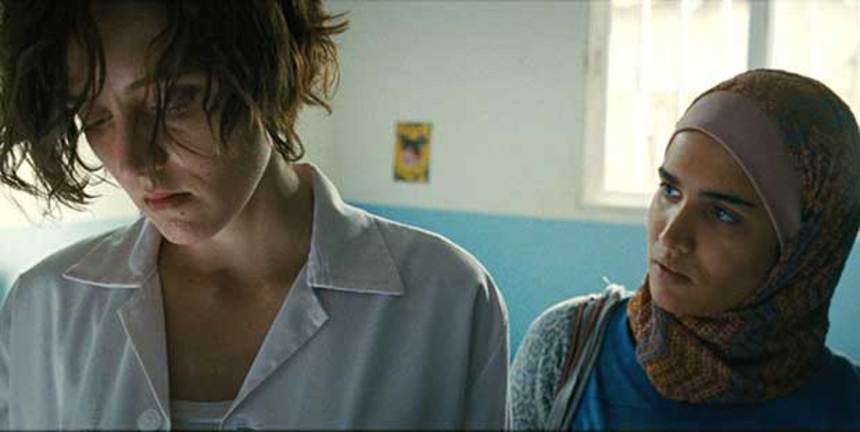 Inch'Allah is a film that is already controversial. In its first session, playing as part of the Australian Israeli Film Festival, it has been pulled. A punter in Melbourne complained it was a propaganda film and biased against Israel in its presentation of the wall dividing Israel from Palestinian settlements. The festival head agreed almost immediately and the film is now scrubbed from the program in all states here.

It is of course a sensitive topic, a relentless and frustrating experience for both sides of the wall, and is hard to really criticize without raising a few angry eyebrows. I would instead like to focus on the film itself, and how despite the gripping subject matter, the end result is a meandering poorly directed effort that squanders its best moments.

Canadian citizen Chloe (Evelyne Brochu) is an obstetrician working in the Palestinian city of Ramallah at a UN clinic. However she resides in Jerusalem where she shares a flat with a young Israeli female solider Ava (Sivan Levy). They become friends and at her clinic she also develops close ties with a Palestinian family and a pregnant girl Rand. This is an acceptable thing - she is a foreigner on neither side of the conflict.

Over time she becomes jaded against Israel based on the dehumanising checkpoint she traverses daily. This deep wellspring of emotion blackens even further when she becomes entangled in a violent and oppressive system that has personal repercussions.

Set in modern day the understated cinematography pulls no punches, the wall is a disgusting place that litters of confused children play around. 'ctrl-alt-delete' is graffiti on the side of the wall. The juxtoposition is there but it is hardly utilized in a clever manner. In Jerusalem people sip coffee and walk about continental markets.

Director Anais Barbeau-Lavalette is a former actor. Her sensibilities carry across into the film, and there is a definite feminist angle to the conflict. However her direction is poor and the full brunt of what she is trying to portray within the ongoing struggle is not engaging enough.
There are far too many missed opportunities, from proper editing to spending longer on key scenes. The scenes of Chloe's reflection and ennui drag for far too long. It is already enough to feel her frustration in this tumultuous position. Long stretches of her frustrated head space bleed into the main narrative and greatly detract from it.

A number of telegraphed traumatic events pile on top of her as the film progresses. These scenes are crucial and tense, but are not given proper attention or time. There are a few major moments near the films end that are so heartbreaking and even some expert misdirection. However, the direction is so lax that these vital moments seem skipped over.

Given the utter fascinating narrative Inch'Allah could have been something special, but the poor direction and pacing really bring this film down. Despite the controversy and supposed bias, as a film it is quite average.

Do you feel this content is inappropriate or infringes upon your rights? Click here to report it, or see our DMCA policy.
AICE Israeli Film FestivalControversyInch'AllahSivan Levy