Interview: Cinefamily Co-founder Hadrian Belove On The Everything Is Festival 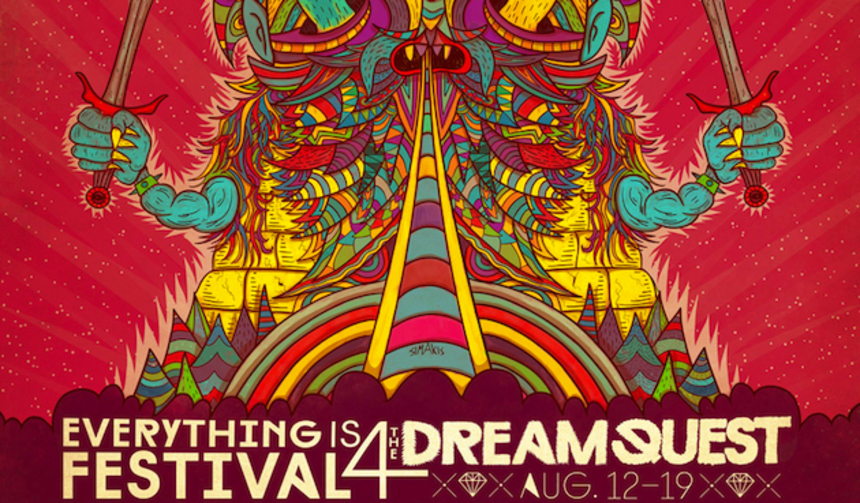 The Cinefamily at the Silent Movie Theatre in Los Angeles is anything but your typical movie theater. The name alone should be your first clue of that. The next may become apparent when you arrive at the theatre, which is tucked into a long block on Fairfax just south of Melrose, what with the curiously strange/charming ivy creeper accompanying the marquee, as should the long lines of dedicated patrons -- patrons being a conservative word. A more accurate tapestry would be of an eclectic community of cinephiles, cult lovers, found footage fetishists and fans of curios large and small, strange and stranger.

Hadrian Belove founded the Cinefamily with Dan and Sammy Harkham in 2007. Since then they have become one of the most undoubtedly important film institutions in the city for their brevity and bravery in programming. Recent offerings have included first runs of such festival favorites as Quentin Dupieux's Wrong and Carlos Reygadas' Post Tenebrax Lux; a midnight screening of Altered States; the first public screening of the Manson documentary in nearly 40 years; a new 35mm print of L'Avventura... and a pizza party featuring the first two live-action Ninja Turltes flicks.

This week they become the home for one epic... Dreamquest. Yes, you read that right. The Everything Is Festival is a cornucopia of arts -- that is of mixed medias -- and a celebration of... well as, Hadrian Belove describes it, "of joy". The fourth edition, subtitled, yes Dreamquest, kicks off this evening with a screening of the found footage masterpiece Final Cut: Ladies And Gentlemen and runs through a gauntlet of media experiences til August 21st. Expect Dan Harmon to play Dungeons And Dragons live on stage, Cinefamily's most outrageous video games (including Atari's E.T.), master Vine video artists Steve Agee, Adam Goldberg and James Urbaniak, an evening with Chris Elliot, and the LA premiere of Neil Breen's Fateful Findings. And this is most definitely the tip of the iceberg.

By now it's quite obvious that a traditional preview of a fest like this just isn't possible in this space/time continuum. So the next best thing? A talk with Hadrian Belove on artists being collectors, the role of artist-curators and watermelon oreos -- Enjoy!


ScreenAnarchy: How would you paint a picture of the fest for someone who has never been... like myself.

Hadrian Belove: Part of the charm of the Everything Is festival is its borderline undefinability.

The programmers and co-directors, Dimitri Simakis and Suki-Rose Etter and the Cinefamily staff end up discussing this every year. And we seem to know what it is and what it isn't. It almost becomes like analyzing a piece of art after you've made it. You try and figured it out and realize what kind of themes were present and so forth.

What's then behind a subtitle like 'Dreamquest'? Or well have we not gotten to that point yet, wherein we have to experience the dream where the quest takes place, that dreaming being the actual festival.

You know every year we seem to name it after... it's funny I can't believe I don't even have a boiler plate answer for this. The answer is... because that's what it is. I mean why is Ninja III the Domination? [Note: last year's fest was subtitled The Domination]

Everything Is Festival IV is the Dreamquest.

I think that is an answer that will make sense, particularly to our readership.

We feel that every festival deserves its own title, for sure. We are certainly taking you on a journey, and it probably has about as much logic as a dream. A lot of these answers keep coming back to: "it felt right."

We've been saying that the festival is somewhere between a gonzo archivist convention and alt comedy or arts fest. In the beginning there were conversations between Dimitri and Suki and myself about the confluence of, and the relationship between, collectors and artists. Many artists and comedians are scavengers and collectors because they're digesting influences. On the other side you have found footage people who are literally becoming comedians and artists, so we're just finding the meeting place in the middle.

EIT is just a great example of that middle space. Or something like TV Carnage. As you draft the festival there's perhaps the artistry and fun of curation, in the shows that Cinefamily does here all the time. That's represented by things like public access, The Mix... our news shows [Mondo News] are probably our most outrageous shows. To the other side where you have something explicit like artists and comedians, for instance Mike Judge or Patton Oswalt presenting something they're into, or Dan Harmon playing Dungeons and Dragons live: that shows their love of these influences and it shows how they've mined them to create new work.

I get the impression that there's spontaneity in that too. Of them coming here and sharing something they love with an audience... they don't necessarily know what's going to happen with that audience that night.

And probably more unusual since guys like Harmon and Oswalt are used to an interaction with a live audience, is the reaction to found footage. Things like the found footage battle royale. That's taking something one might see as a private enterprise, looking at things you've found at thrift stores or on Youtube, and having a group experience with 170 people. It changes the nature of that.

It definitely changes the nature. Looking through the program there's also the video game element of the fest: showing these old Sega CD games and such. These are things that if your audience knows them, then it's because they've sat in their own homes as kids or teenagers and experienced them, for the most part, in private. So now you have these things presented in this public space as well.

I'm gonna keep going back to that fuzzy liminal space between creation and curation; of discovery and rediscovery. I think the same way there are certain tropes about how documentary and fiction are two sides of the same coin, I think that's true of artists and their influences as well. There's a Mike Nichols quote on the Catch-22 audio commentary, or maybe Soderbergh quotes Nichols, but he says "All artists have influences, some are just better digested than others." Hopefully that space between what came before and what's being made fresh gets ordered in an interesting way throughout the festival. Obviously a lot of this is around comedy being a real centerpiece. But sometimes it's just about any kind of creativity and joy.

Comedy can be a very immediate outlet.

It's certainly something people understand very quickly. To be honest, some of the funniest shit I've ever seen... it's very hard for even the most brilliant comedian to keep up with what's going to happen in The Dragon Lives Again or the incredible work of  Neil Breen [I Am Here Now]. That film is gonna deliver just as much joy and laughter and exhilaration as anything Seth Rogen will do. Also taking something and putting it together with something else across media. Last year we had an barbershop quartet learn the Philip Glass' music to Koyaanisqatsi. And there's versions of that happening this year. You know there's John Moschitta Junior, the fast talking Fed Ex guy, recreating those commercials in person. We have a world famous whistler who is going to whistle classical music to abstract, synesthesia like work.

Have you figured out what pieces will be whistled?

We're still working out the details, but he'll do it to synesthesic animation like Fantasia.

So with you, Suki and Dimitri planning these events, up to a certain point... the way I am picturing it is that you guys are acting as this bridge as curators, as artist-curators, being this third piece between the audience and the art/artists.

Well the third piece tends to be how one notices trends. And the democratic joy of creativity is a really big one for us. Last year having [Mystery Science Theater 3000] creator Joel Hodgson speak about his childhood making ventriloquist dummies... Or artist Wayne White... We wanted to do Pee-Wee, but couldn't do it. And this year there's something like Beauty Day, all the performers from public access.

There's a history in all those places, a joy to it...

Well we're like "do your thing. Make something happen. Art can be fun." Every year's festival feels a little different, and this one is a little more comedy heavy, but it's still about, more than ever, a time to be festive and celebratory. Underneath it all we do hope it's an art's festival. The experience of being in the theater for that entire ten days is going to be joyous and interesting... regardless of the show.

There's gonna be stuff happening on that patio and upstairs that's always happening. We were joking about calling it a Small World's Fair. We're not just doing the video game show, we're having this installation where you can go up and try and play out these weird, failed games. And the pop-up restaurant is gonna be amazing. We've got snacks from all around the world that we've found and curated... watermelon Oreos. We'll serve folks like it's a small plates restaurant. We're gonna recreate either food invented on the internet, or we'll try and make our own version of the Crown Crust Hamburger crust pizza that's more Middle Eastern. It'll be different everyday. Really it's all flavor tripping. And that's the same approach as how we look through the bin for pop culture videos.

For everything on the Everything Is Fest, click right here.

Do you feel this content is inappropriate or infringes upon your rights? Click here to report it, or see our DMCA policy.
cinefamilycurationdan harmoneverything is festivaleverythning is terriblehadrian belovemike judgepatton oswalt