Fantasia 2013 Review: OXV: THE MANUAL Has A Mighty Brain But A Heart Three Sizes Too Small 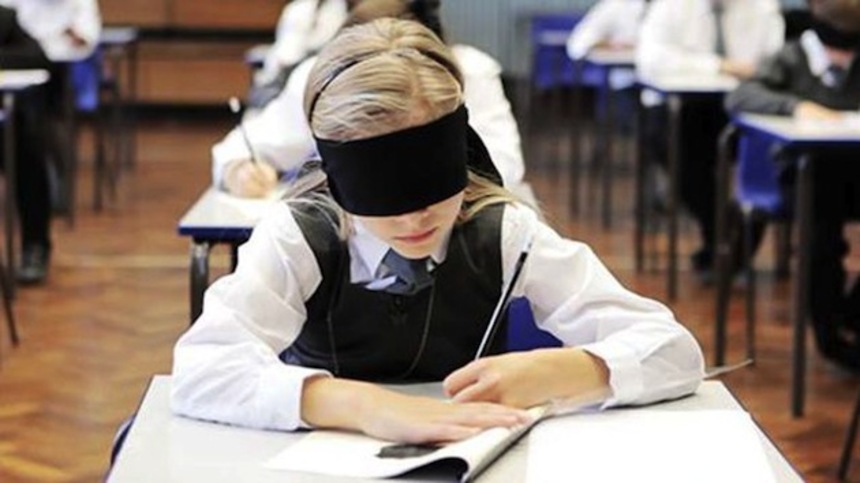 There are two mantras at play in the offbeat philosophy lesson traveling in the guise of a film with the gangly moniker of OXV: The Manual. The first one is that "knowledge determines destiny," and the second is that "all you need is heart, soul and a little imagination."
The film is chock-a-block full of knowledge, destiny and imagination, but suffers a bit from a lack of heart and soul. Whatever qualities bring you to the cinema will likely determine how you feel about this science fiction curio, but for me, personally, the failure to land the love story left me wanting a better film attached to this story that is constantly spewing out ideas like a fountain at the unfortunate cost of emotional involvement. This feels more like school than life; a romantic encounter is less like a date, and more like data.

The central concept, jutting outwards like spokes on a wheel, comes from a somewhat intuitive notion we probably all share. You most likely have, in one capacity or another, a lucky (or attractive) friend for whom life seems to come so easy for them. It is as if nature itself works very hard to give the genetic lottery winners everything they want or need. Conversely you might equally have a friend for whom the bad things seem to hover over them like a thundercloud. That is, if someone accidentally knocked their geranium pot from a fifth story window, the lucky friend would of course be nowhere near where things fell, but the unlucky one would miraculously happen to be walking along underneath and get a hair-full of shattered crockery and a painful lump.
A story bursting with ideas, it further postulates that those with 'high frequency' (i.e., are lucky) also have low empathy and emotion simply due to things going their way. They do not need so much to sympathize or feel for the pain of the less fortunate. Likewise, those with 'low frequency' (unlucky) have more empathy and EQ.

In a private boarding school in England there is research happening on such things, and thus, the place has drawn an assortment of colorful outliers. A device invented to detect frequency bears a curious resemblance to a Valentine's Day box of chocolates. Early results find that when a high and a low are in proximity of each other, bad things happen, with the expected victim paying a steeper price than usual.
So pity, then, Zak, the low frequency male who has a serious crush on Marie, who lies at at the other end of the spectrum -- possibly the highest frequency person on the planet. When Zak and Marie get too close, spontaneous events occur outside of the planned experiments, with Zak getting soaked and Marie remaining dry. Or the school might catch fire, or a plane might crash.  Naturally the powers that be make efforts to keep these two apart, but love on Zak's part, and curiosity on Marie's, keep flinging them together for only the briefest encounters - about 60 seconds per school year. The kind of sparks that fly from this unrequited contact are the kind that just might burn the school down.

Broken into chapters that are framed from each point of view, we see these not-fated lovers from childhood up to early adulthood separately, and the strange ways they will encounter each other. A story often exists in how the stories juxtapose. It is smart filmmaking, to be sure, as it plays with expectations just when you know what is going on.  But there is a nagging feeling underneath the cleverness that something important is missing.
Take, for example, Andrew Niccol's Gattaca: the underdog there (and here) through passion and intelligence, finds a way out of the 'genetic' lot dealt him in life and achieves his goal through sacrifice. Here, Zak spends his life looking for a mathematical (and musical) solution to changing his own unlucky frequency. He finds it, and Marie as well, but the result feels too manipulated to truly work and things fall flat in a similar fashion to the final act of The Adjustment Bureau. Where the latter film had the gonzo chemistry between Matt Damon and Emily Blunt, OXV suffers from an absence of sparks between its twentysomething leads, Scarlett Johannsen lookalike Eleanor Wyld and Andrew Garfield-esque Daniel Fraser. The childhood versions do not fare much better, I'm afraid, although the film is strongest in the schoolhouse with the peculiarities of this type of education.

The school gives the students an alias when at the school that corresponds to famous scientists and inventors. So Zak is named Isaac Newton and Marie is Marie Curie. Zak's friend Theo is named after Thomas Edison, and falls curiously in the middle of these two frequency poles. I wish there were an Erwin Schrödinger, for this is a movie of  Gedankenexperiment kittens, or a Werner Heisenberg, but as a consolation to lack of an uncertainty (this movie tells, tells and tells, instead of shows),  As Nikola Tesla might have said, "Exact science, is not an exact science."
The scientific window-dressing in the film does its best to patch over The Celestine Prophecy (for those who remember that utterly empty 1990s bestseller) type of new age spirituality. And yet the idea that *not* desperately wanting something is often the path to achieving something with ease (or put another way, the cure is dangerously close to the disease), is kinda zen.  A paradox achieved in the middle of the film goes like this familiar bit of relationship friction, "If you love me, you will make me not love you."  I think if writer-director Darren Paul Fisher, who seems a nice enough chap, put this out as a novel, coloured with shadings of Douglas Adams and ideas of Neal Stephenson, instead of a film, all the tangential stuff would play better, and maybe the love story too.

The Spanish thriller Intacto seems to have covered similar ground in a more thrilling fashion, and while it also suffers from this lack of emotion, it has Juan Carlos Fresnadillo's gift for visuals to more than make up for it.  Daniel Cockburn's exotic indie, You Are Here, exists in the same space, with its own wellspring of Borgesian philosophical ideas about how the whole human experience is mystical and mundane. By sidestepping emotion in that film it paradoxically becomes emotional - like the OXV way, simply by not trying too hard.
Your mileage may vary, but when I hear the claims of originality due in part to the indie nature of this film, I find such claims misleading, but at the same time totally moot. OVX: The Manual, for all its brainstorming sessions at the chalkboard and bravura structure, is far more prosaic, a mere textbook when it promises (as we all are, going from childhood to adult) a transcendent symphony.  Upon reconsideration of that penultimate sentence, there may be some truth to knowledge driving destiny, right into the banal.
Sign-In to Vote
Tweet 0 Submit

Hi
I fully appreciate that everyone has a right to their opinion and you obviously didn't enjoy the film. However, out of respect to those who put so much hard work into the film it would be nice if you got all of your facts right. There are many mistakes in your review but the most glaring is that Zak is named after Isaac Newton. Nicola Tesler is the name given to Marie's friend.
There is no plane crash - the meeting of Marie & Zak only threatens Zak & not others. There are suitcases which fall from a plane which narrowly miss Zak.
There will be no "spark" between Zak & Marie especially when younger because the point is that Marie cannot feel emotion because of her high frequency.

Admittedly it is a film of much detail. I would never argue that. Naming and Newton details are fixed.