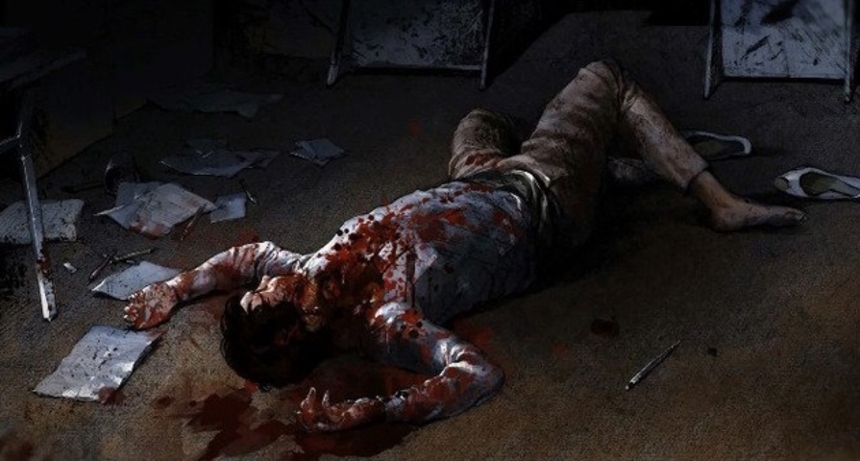 Every summer, Korea pumps out a handful of horror films for people looking to catch a few scares and respite from the hot and humid summer. Unfortunately, the industry's yields over the past few years have left much to be desired. So poor have recent offerings been that some are ready to write off K-horror altogether.

This summer we have four new entries to sample and they were all released in the month of June. Among them, Killer Toon, the first one I've had a chance to see, seemed to hold the most promise.

A web publisher receives a comic manuscript late at night and is about to leave her office when she notices the animated panels on her screen mirror her current actions. The lights knock out, the shutters drop and a ghostly presence is felt. The subsequent morning brings with it a crime scene surrounding the publisher's supposed suicide. The author of the webcomic is soon questioned and when the bodies start piling up, each with eerie connections to the author's drawings, she becomes the prime suspect.

It may well have to do with a case of lowered expectations, but for me this was a step up over the K-horrors of recent years and probably my favorite since 2009's excellent Possessed. Carefully staged and boasting a novel combination of live action and animation, not to mention an effective dose of scares, Killer Toon proves that K-horror still has a pulse, if still just a faint one.

Director Kim Yong-gyoon has had a rather eclectic career. He began with the highly regarded drama Wanee and Junah (2001), then gave us the K-horror The Red Shoes (2005), which was also well received, before moving on to the action genre with the appalling The Sword With No Name (2009). While I was definitely not a fan of his last film, it did afford him plenty of opportunity for visual trickery, as he sought to develop a new action cinema style.

Webcomics are all the rage in Korea these days. You can't step onto a subway in Seoul without seeing people scroll through them on their smartphones, and a number of recent hit films have been based on them, such as Neighbors, 26 Years and Secretly Greatly. Incorporating them so prominently in Killer Toon -- the Korean title is The Webtoon: Murder Warning -- is clearly a commercial move, and perhaps a wise one to safeguard against the rapidly diminishing returns of Korean horror films, but it also allows for a strong visual aesthetic that largely makes up for some of the film's weaknesses.

Where the film does stumble is its pacing (at 104 minutes, it's a good deal longer than most recent K-horrors), its thin characterizations, and its overreaching finale. While it boasts a decent plot, though derivative of recent local fare such as Bestseller (2010) and this year's woeful The Gifted Hands, it's a little repetitive and contrived, particularly in it attempts to tie everything together on a narrative and thematic level. This bundling results in a misjudged plot twist in the finale that is almost saved by a very nifty visual cue.

Speaking of throwing everything into the pot, the commercial side of Killer Toon rears its head again when a significant amount of melodrama appears in the third act. A common technique of Korean films in recent years, it feels a bit tacked on following two acts of scares galore and two-dimensional characters.

As with many horror films, particularly those featuring ghosts, revenge is the prime motivator here, as vengeful spirits seek to even the score with people close to them that either killed them or let them die. A number of the individual scare sequences play like mini revenge stories, which bring to mind the current popularity of horror omnibuses (Horror Stories, V/H/S, The ABCs of Death). We are quickly introduced to a character, location, and supernatural threat, but before the ghost makes a physical appearance we are made privy to the 'why' of each revenge. While this could get messy and a bit contrived, the webcomic gimmick and some slick editing pull it altogether succinctly. The backstory reveals switch our sympathy from the protagonist to the antagonist, the scares are only made more potent. This technique is hardly revolutionary, but it's very well handled here.

While I do think that Killer Toon is the best K-horror we've seen in a while, that on its own is not exactly a ringing endorsement. Kim's latest is unlikely to instill a great deal of renewed faith in the genre, but a few more efforts like this and people may once again warm to one of the Korean film industry's most popular exports. With a visual palette that is well paired with its decent premise, Killer Toon has just enough meat on its bones for a satisfying bite.