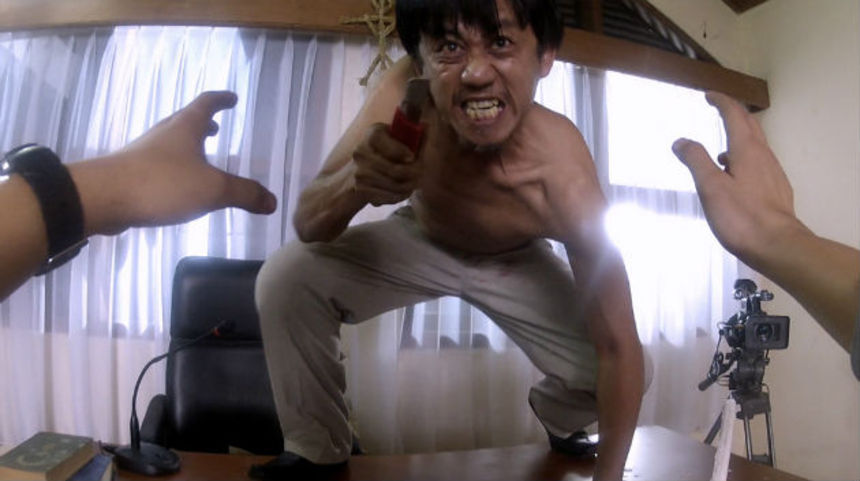 Though perhaps not the very most consistent of films, V/H/S set a high bar for found footage anthology chillers. Only one year later and the team that brought us that film is back with the follow-up, V/H/S/2.

Of the original directors, only Adam Wingard (You're Next) returns. Writer Simon Barrett takes his first turn in the director's chair for the segments that wrap around shorts from Wingard, Gregg Hale & Eduardo Sanchez (Blair Witch Project), Gareth Evans (The Raid) & Timo Tjahjanto (Macabre), and Jason Eisener (Hobo With A Shotgun). With only four shorts plus the wraparound, the finished product is a tighter, more entertaining, and more consistent film. Consider the bar raised.

Barrett's wraparound segment follows a pair of private dicks looking for a lost boy. What they find is an abandoned apartment full of tapes. These segments are much less manic than V/H/S and could stand alone as a segment. As a wraparound, it does the job without getting in the way.

Wingard's segment is shot from the perspective of an accident victim (played by Wingard) whose eye is replaced with a cybernetic organ set to record everywhere he looks. Unfortunately, that includes the ghoulish visions that the implant allows the recipient to see. The trend in V/H/S/2 is to mostly abandon the notion of "found footage." It's more accurate to call it POV horror.

This POV idea continues in Hale and Sanchez's piece, which has one of the simplest and most innovative concepts. A guy straps a GoPro to his helmet and takes his mountain bike into the woods. Along the way he is attacked by and turned into a zombie. Now we have a zombie with a GoPro on his head. If you think that sounds awesome, it is. Some really impressive stunts and effects make this short a total blast. 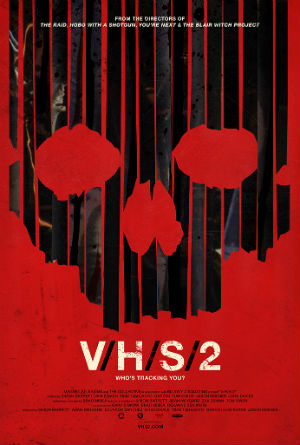 It's difficult not to get silly raving about the incredible short from Evans and Tjahjanto. The plot follows a documentary crew as they visit the compound of a doomsday cult. It turns out the cult leader had some less than noble reasons for granting the crew permission and the day of doom might be closer than anyone on the crew expects. Incredible practical effects and remarkable storytelling skill make this the segment that has gotten the most attention, even if it did seem noticeably longer than the other pieces.

The final segment belongs to Mr. Nova Scotia himself, Jason Eisener. This might be the dark horse of the bunch and it's certainly the funniest. The story involves some kids left home alone at their lakeside house one weekend. The boys get up to no good with their video camera as the older sister lets her teenage hormones rage with her friends and boyfriend. Hell breaks loose when a flash of light in the sky brings an unknown danger down on the kids. Eisener does a remarkable job portraying the boys, right at that tender, voice-cracking age, showcasing a real talent that could be put to good use in a bigger, young-person-driven film (think: Goonies With A Shotgun).

It's pretty obvious the producers of V/H/S took note that the pieces that were the most successful were the ones with the best senses of humor. All of the segments in V/H/S/2 have a levity to them that makes the jolts of horror all the more fun. This is greatly aided by the sound design, which is consistently excellent across all the pieces. With its streamlined approach and group of ridiculously talented filmmakers at the helm, V/H/S/2 is a total success, and there will surely be more to come.

Review originally published in slightly different form during the Sundance Film Festival in January 2013. The film is now available to watch via various VOD platforms and opens in limited theatrical release on Friday, July 12. It will expand to other locations in the following weeks.

Do you feel this content is inappropriate or infringes upon your rights? Click here to report it, or see our DMCA policy.
Adam WingardAnthologyFound FootageGareth EvansJason Eisenerv/h/s