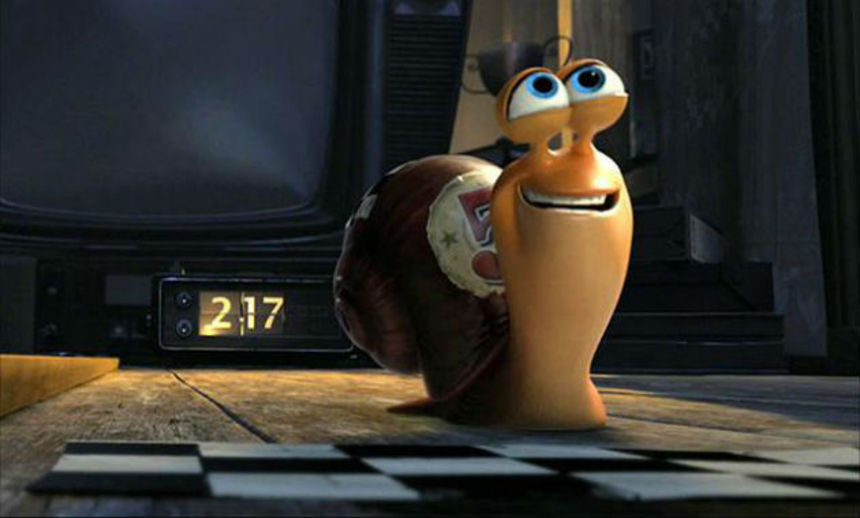 Always pursue your dreams, no matter how stupid and weird they may be. That's the underlying message of Dreamworks' latest high-concept, celebrity-voiced animated offering, Turbo. It's the story of an outsider snail named Theo who, deep in his heart of hearts, wishes he was a race car.

Is Turbo the 3D animated race car snail movie that the world's been waiting for? David Soren, whoever he is, certainly thought so. Soren's name appears in rapid succession in the closing credits of the film (Director, Screenplay, and I believe also Story), momentarily evoking the way Marv Newland's name intentionally and humorously dominates the credits of his singularly created "Bambi Meets Godzilla." So it's probably safe to say David Soren (this being his debut feature film, coming from a Dreamworks Animation background), the primary creative voice behind Turbo, had a filmmaking obsession (or "dream" -- they're pretty interchangeable in this context) that he simply had to push and push to the finish line, no matter what!

Turbo, despite its plasticine appearance, is actually a strangely refreshing family crowd-pleaser, while, nonetheless, remaining ever plasticine. The whole idea -- a snail racing against race cars -- is somehow both utterly absurd and jaw-droppingly obvious when it comes to its likelihood of success as a modern computer-animated entertainment.

Soren knows risk in forging his vision: Turbo shamelessly embraces both of-the-moment elements, like Autotune remix viral videos and food trucks, while also embracing timeless concepts, like IndyCar racing. True Fact: In the whole recorded history of the Indianapolis 500, The Greatest Spectacle In Racing, no mollusc has ever won. Discontent with his daily tomato-ravaging garden grind (the 9 to 5 job of any respectable snail), Theo aims to somehow change all that. The spirit of the whole goofy production is right in line with that of its protagonist.

Early on there are a number of scenes detailing Theo in his off hours: Staying up late in an old garage, meticulously studying old VHS tapes of past IndyCar races. Best not to ask how the small snail manages to load the cumbersome tapes that are five times his size in the VCR, turn on the TV, and press all the necessary buttons. All of that somehow happens off frame. Simply know that this snail is driven, going so far as to idolize a champion racer, voiced by Bill Hader. Will this champion racer turn out to be an arrogant, egotistical and ultimately insecure antagonist who must be trounced before the finish line? Well, yeah. But it's all in good fun, and it works.

Theo's big break comes when fate (in the form of a wacky 3D animated adventure sequence) finds him pulled into the nitro-modified engine of a roaring street racer; screaming pistons and gleaming parts right out of The Fast & The Furious. He emerges with super speed, able to zip and zing and zag all over the place leaving an eye-pleasing lighting blue speed trail behind. (If a Tron light cycle were voiced by Ryan Reynolds, it would be a lot like this.) This is a positively silly race car snail movie (and surprisingly well animated at that) -- logic can wait in the parking lot.

The dogeared crossword puzzles doubling for his checkered flag shell stickers are soon upgraded into a full-blown mini Indy car casing, complete with sponsorship and a cool spoiler. This is how the bored struggling shop owners of a rundown Van Nuys store plaza kill time: By not only racing snails, but outfitting them with cute little race car effects. (Also among the decked out: Samuel L. Jackson, Maya Rudolph, and Snoop Dogg.)

But it's good old American entrepreneurial risk, innovation, and opportunism that prompt these people (voice talent including Michael Peña and Michelle Rodriguez) to take Theo -- newly dubbed "Turbo" -- to Indianapolis. All the while, our hero's pessimistic brother (Paul Giamatti, who of course is this) is expectedly skeptical. The human characters have their own risk in the game -- the $20,000 entrance fee -- and Turbo has, via backbreaking plot twists, been given his one opportunity to live his obsession -- er, I mean "dream." By the end, the whole world will know "That Snail is Fast." (Which is a terminally stuck-in-your-head tune that appears in the movie. Just typing about it, it's now back again, on unstoppable mental replay. Great...)

There's no way around it, Turbo is a fun movie, with a great sense of why speed is cool. It's as predictable as it is illogical, but it glides along smoothly on a path that you'd never guess was mucus, and it's got a winning array of characters (the make-or-break for this type of film). They are voiced by the expected glut of recognizable celebs soaking up yet more easy money, but they prove fun to spend 96 minutes with. My kids had a blast with Turbo, and I've certainly endured far, far worse.

So -- Is Turbo the 3D animated race car snail movie that the world's been waiting for? Sure, why not?