NYAFF 2013 Review: Sono Sion's BAD FILM Is By No Means That 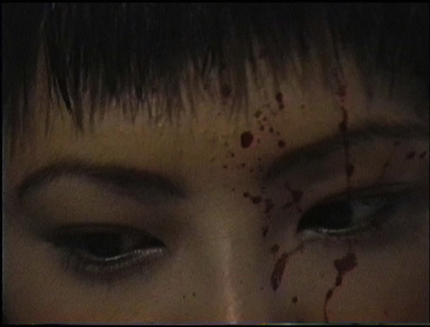 Nobody should walk into a Sono Sion film and expect to anything close to a conventional experience. The director's two most well-received films -- 2008's upskirt photography romance Love Exposure and 2010's fish store owner/serial killer epic Cold Fish-- are certainly not exceptions to this rule. This year at NYAFF, programmers selected an old/new Sono entry, 1995's Bad Film, for screening, and even if you've seen and enjoyed the two films mentioned above, you're in for a completely different ballgame when you sit down to this flick.

When Bad Film was first shot in 1995, Sono was mostly known as the leader of Tokyo Gagaga, a performance art collective claiming membership in the thousands. It was with these individuals that Sono completed a rough -- very rough -- cut of Bad Film on raw Hi-8 video. As fate would have it, the endless hours of footage never saw the light of day, as Sono's film career took him down different roads, but now, for the first time in America, Bad Film is available to audiences...and what a film it is.

The set up is communicated to the audience through a barking narrator and title cards: in 1997, Tokyo has been torn apart by gang violence, and two organizations in particular, the Japanese nationalist Kamikaze and the Chinese-immigrant led Baihubang, are embroiled in a bitter feud resulting from decades-long racial tensions. As things boil over into all-out war, two women fall into forbidden love, and a lesbian Romeo & Juliet love affair--of sorts--begins.

This is pretty much the entire plot of Bad Film. The script, if one ever existed, is filled out by wackier and wackier ambush theatrics and absurd comedy (the leader of the Kamikaze and his relationship with a dead hog's head make for some of the most impactful fodder) and truth be told, it's easy to slip in and out of the plot for a variety of reasons, not the least of which is a mammoth 161 (culled from 150+ hours of raw footage, according to NYAFF's website) minute running time. Still, there's very little about Bad Film that feels indeliberate. Time and again, Sono escalates the bizarre action and inter-gang conflict to the point of sheer absurdity, only to turn on a dime and treat viewers to strangely poignant moments that leap out of the screen when surrounded by such a carnival-like atmosphere. One scene in particular, in which the warring gangs respective interpreters speak to each other in alternating Chinese and Japanese, drives home the absurdity of racial divides and other prejudices that still linger in contemporary Japan.

Presumably this is what Sono was going for: a good portion of the film seeks to empower homosexuals, another of Japan's more marginalized groups, as the lesbian love affair's ripples eventually spark a coup amongst the closeted gay members of Kamikaze. It might be an overstatement to say Bad Film is some sort of countercultural crusade, but it's hard to believe that Sono only shoehorned in the gay characters for cruel laughs, even if there is plenty of slapsticky, nongraphic gay sex to go around. The larger point of Bad Film seems to be transgression itself, and the resulting product is a film that is very Japanese but somehow seems to run counter to the perceived national character at the same time. Scenes of Kamikaze party members screaming at Shibuya residents raise little more than irritated glances from passers-by. If this showcasing of Japanese apathy and encounter-phobia was the true motivation of Tokyo Gagaga from the start, Bad Film has certainly succeeded in making several strong arguments.

The greatest strength of Bad Film, though some might call it a weakness, is that it's hard to tell where exactly the joke begins and ends. The NYAFF programmer informed us that Tokyo Gagaga shot the entire film without permission or release forms, and in many cases, involved unwilling bystanders in filmed altercations and other scenes. When you watch the movie, it's almost impossible to pick these scenes out of the loosely scripted parts of the film, which lends an air of uncertainty to the proceedings. This ambiguity doesn't make for extremely coherent storytelling and it certainly doesn't allow for technically advanced filmmaking, but it does leave the viewer with a sense of openness and innocence, two qualities that are sorely needed with a film this dense and sprawling. Bad Film is a transgressive comedy at its core, but like all great pieces of found art, it manages to exist as something different from what it set out to be. This movie has some things to tell us about prejudice and xenophobia, but it's hard to say exactly what those things are. Instead, consider it a treat to just let the waves of meaningful nonsense crash over you and go along for the ride.

Do you feel this content is inappropriate or infringes upon your rights? Click here to report it, or see our DMCA policy.
Bad FilmNYAFFsono sionTokyo Gagaga