FIDOCS 2013 Review: FORGET ME NOT Establishes David Sieveking As A Masterful Documentarian 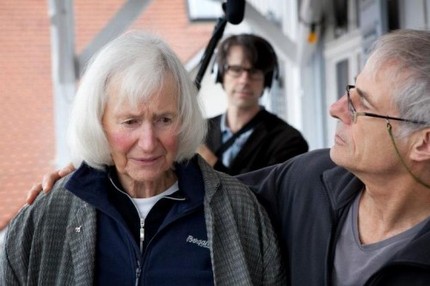 German documentarian David Sieveking's previous film David Wants to Fly played at FIDOCS in 2011, which was the only time I had the opportunity to see what I feel is one of the most impressive and powerful documentaries of the new decade. That film's subject matter and interviewees have prevented its release in most countries, as it centers around the filmmaker David Lynch and his association with the movement of Trascendental Meditation, and its connections with an almost mob-like organization that practically scams people out of their money.

It's a shame that a lawsuit is preventing this from being seen by a wider audience, but at least we can be sure that they won't be able to stop Sieveking's new movie from getting a release, as it really should.

Forget Me Not follows a similar structure and approach as his earlier film, where David Sieveking is the protagonist. He has managed to create an on screen persona that is never annoying or discomforting to the viewer, you are never tired of seeing him on the screen because you understand and care about the things happening, mostly because they are happening to him and not to some other people that he is representing (that I think is the main problem with other documentary hosts like Moore or Spurlock, though I do like them myself, I can see why some people don't care for them).

Here the focal point in his life, and in his film, is his ailing and elderly mother. She has a severe case of Alzheimers. Through the course of the film we see how it affects not only Sieveking's relationship with her, but also her relationship with her husband, Sieveking's father, who has to take constant care of her at all times. Though she has forgotten many things, she suddenly has sparks of brightness where she remembers moments from her childhood. And yet she easily forgets the people that are around her, what their names are, or even her own age. She can't believe that she's over 70 years old.

During the course of the film she is left alone with Sieveking as her husband takes a week-long rest in Switzerland. He tries to acclimate to her routine and ways of life. At the same time he also constantly tries to make her exercise and remember certain things about him, or just simply make her do the stuff that she used to do. There's something sad and funny at the same time when we see her finally reunited with her husband and she doesn't know who he is, just because he hasn't been with her for a week, and now she thinks that his son is her husband.

Sieveking also gives focus to the larger history of his family, at the same time looking into the mechanics of marriage itself, which for his parents happened in the radical 1960s. They married under the condition that they could have affairs with other people without any problem from the other, and so they did, constantly, and many times as the years went on. There are some incredible passages about the activism in which they were both involved, fighting for the liberation of Chilean prisoners during Pinochet's dictatorship, as well as denouncing the killings under his régime. All this is beautifully shown through pictures found by David and the files of the Swiss Secret Service that followed the couple.

Forget Me Not is a beautiful and emotional film, one that doesn't pull the strings of your heart because it wants to, but because the reality of this family demands it. Sieveking is always respectful towards the subject matter, it is his family after all, and while for some this portrait of the mother with a sickness may feel clichéd, here it is framed with such a beauty, as a tribute to the great person that she was, and not to the woman that she has devolved into. Forget Me Not should and will make you cry, but not because of the wrong reasons, but because of how its feelings ring true every time we see the love and care in which this woman herself is framed, and how Sieveking looks at her as if she truly were the greatest woman in the world -- as all our mothers are to us.

Do you feel this content is inappropriate or infringes upon your rights? Click here to report it, or see our DMCA policy.
Alzheimersdavid sievekingfidocsforget me not