Destroy All Monsters: You've Been Comic-Conned 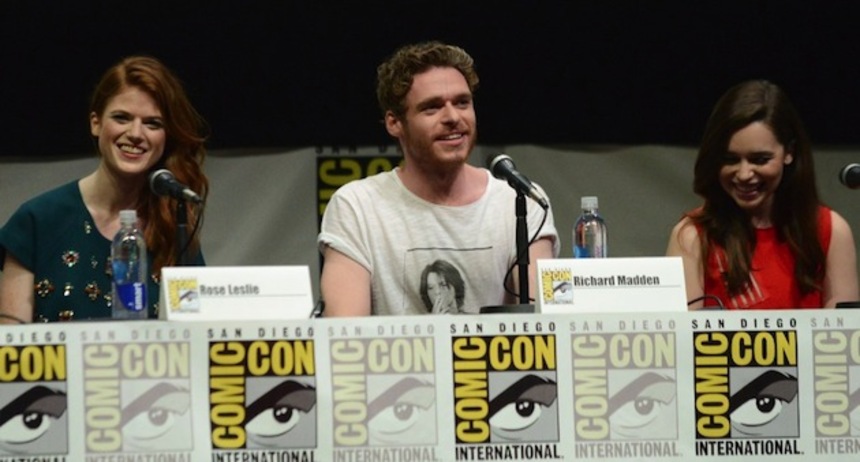 The first time I went to YouTube to watch a trailer for an upcoming movie and was forced to sit through 15 seconds of an unrelated ad before I was allowed to watch the ad I had freely volunteered to watch, I realized we had entered a viper pit of marketing where the original pleasures of a circle-jerk - moderate pleasure for modest reciprocal effort - were no longer even available, given that we are now apparently required to give reacharounds to ourselves.

So it is with Comic Con, the annual summer solstice festival / Burning Man for the North American geek community, most of whom are peripherally aware of comic books as the things that were somehow involved in the early stages of the making of Iron Man 3. The convention has become a global marketing behemoth made out of the United Nations of geek culture, a Crisis on Infinite Earths where all dimensions of the fan cosmos are brought together to freak out over everything they're going to be spending money on over the course of the next five years.

At Comic Con this past weekend, local god Joss Whedon declared an Age of Ultron, while arch frenemy Zack Snyder backed into DC Entertainment's last corner by stumping for Batman in his Man of Steel II. The stars of the television series that fuel Tumblr - Game of Thrones, Doctor Who, Breaking Bad, etc. - sat on panels and waxed philosophical about whether Joffrey deserves another pimp-slap (he does) or if Karen Gillan looks even better bald (harder to determine). Khal Drogo, be still my heart, briefly resurfaced in the land of the living to plant a wet one on Emilia Clarke and scold George R.R. Martin for sending him to the Night Lands in the first place. Same old, same old - a gigantic ouroboros marketing machine that feeds, and consumes, itself.

The teenage version of me, who I spend quite a bit of time with even now, wouldn't have known what to make of all this. He was deep in the closet about having grown up on Star Wars - because Star Wars was the love that dare not speak its name at the bottom of the valley between Return of the Jedi and Episode I - and he got his annual fix of Star Trek: The Next Generation fandom every other October when he went to a Creation Con in Toronto, which was attended by some three hundred or so other people.

Now that fandom is open - wide, wide, cavernously open - I sort of want to take another run through high school. (To whit, and paging Marc Webb: wouldn't Peter Parker be the most popular kid in his class, as portrayed by Andrew Garfield?) This earth thus inherited, geekwise, seems a fine thing. If Comic Con itself has merely become the most vulgar extension of the marketplace side of the movie business - basically, Cannes: America - who am I to complain?

In the "honour every part of the animal" notion of hunting, killing, and consuming large game, Comic Con makes beautiful sense. The fan community at large, for any property that can even tangentially be described as "geek," is basically a Mr. Fusion reactor waiting to have the garbage thrown in, after which it'll give you power for years (backwards or forwards). The energy is already out there, and better, it comes pre-coded, referenced, and approved, with its Wikipedia entry ready to post.

Someone out there, in Hollywood or above, noticed that fan communities aren't just enthusiastic - they're also obsessive. In the strange alchemical collision of pop culture and classical nerddom, there evolved an ability/desire/consuming need on the part of whole armies of people to identify themselves via those media offerings with which they, themselves, identify. In an increasingly widespread array of personality signifiers across multiple media platforms - a girl in half a stormtrooper outfit playing The Last of Us on her TARDIS-blue couch while live-tumbling this week's episode of Supernatural and swearing in Dothraki - attachment has become about more than how one defines oneself to others. It became about how one understands oneself for oneself, as well, in an endless mood board of ageless vampires, space cowboys, and Asgardians who say "quim."

While it's difficult to draw direct linkage between fan interest and box office mega-grosses (Pacific Rim's domestic tally argues that fan interest, alone, is good for about seventy million bucks - lots of money, unless you're a movie studio), fan communities and their vast multimedia reach have a role to play building the bridge between the niche audience and the mainstream. In the Malcolm Gladwell sense, geeks are a cross-bred super-army of mavens, with the internet as their connectors.

And what's astonishing about the whole enterprise is simply that this entire group of people is not just willing to be marketed to; they're basically begging to be marketed to, and to go on and spread that marketing beyond the sphere of San Diego. They're a voluntary marketing department made up of people who aren't just workaholics, but who go home at night and worry about not being workaholic enough.

Money's money, and the movies, the TV shows, the content itself, has just become the loss leader that gets you into the store anyway - so that you can buy the blu-rays, and the licensed scarves, and the epically expensive action figures, which is where the real cash will be made in perpetuity long after the shows are off the air and the movies have been rebooted (twice). All the physical product is how the community feeds itself anyway, by further and further inculcating itself within comfortable folds of manufactured, media-based identities. The studios just stand off to the side and watch - and dribble out a bit more content, and a bit more, and a bit more, so that we all know well enough to keep coming back, never stray too far, and ask for more, and more, and more.