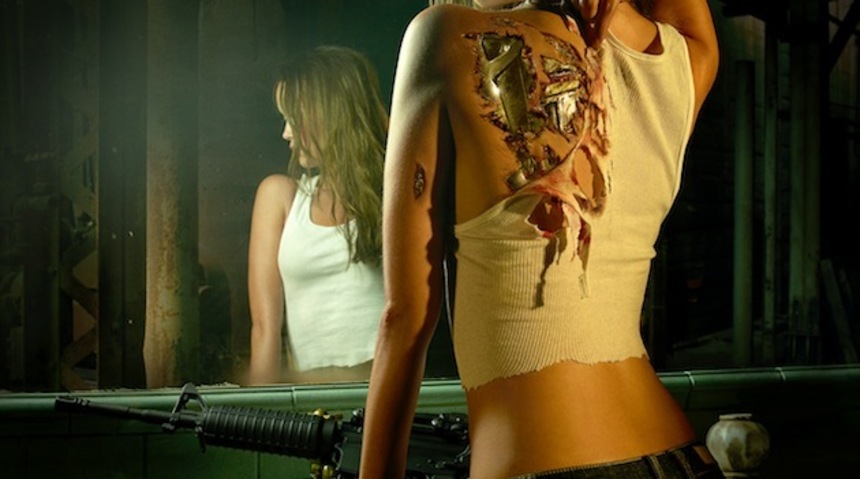 Of the many mistakes Terminator Salvation made -- and boy, there were a lot of them -- perhaps the biggest was the film's failure to recognize the storytelling potential contained within the franchise's own in-built time travel framework. While I doubt this is what most of us would pinpoint as the 2009 film's biggest flaw, it certainly yanked any credible narrative tension completely out of the picture, and by extension, out of the Terminator franchise.

(Sketching briefly: Terminator Salvation takes place in a world where John Connor is aware of the events of Terminators 1, 2, and 3, and yet the narrative never deviates from what we know to be true prior to the start of Terminator 1. In nominal terms, this renders it a prequel; but because it catches up to a character at a point in his life after three films we've already seen, it's also a sequel. Welcome to time travel. Oh, and narrative uselessness -- welcome to that, too.)

Last week, Annapurna Pictures announced that Terminator 5 would be joining the already insanely crowded franchise queue that will apparently make up the entirety of 2015, and that it would also kick off a new trilogy of Terminator films (though the same line was uttered prior to Terminator Salvation's disastrous release, so whatever). The announcement was, predictably, met with muted yawns. To be sure, every post-Cameron Terminator property has had its element of comprehensive suck, and given Arnie's post-gubernatorial track record at the movies, there's no reason to believe that T5 is going to be any different.

Nonetheless, I remain a casually obsessive Terminator fan, even given that the hit-to-miss ratio of the franchise as a whole has been sinking like a stone since 1991. I say "casually obsessive" because my interest in unwinding the Terminator watchwork is worth a passing daydream or two, but doesn't exactly stop me in my tracks on a regular basis. I'm no more interested in seeing a new Terminator film, I think, than any other regular moviegoer. I do, however, have some ideas about what the franchise should, and should not, revisit.

Let's start with the should nots. The history and development of the T-800 is not interesting, and neither is the 60-something Austrian scientist who nobly invented the horrible machines and then lent his face to his creation forever after, or whatever the hell the screenwriters might think they could be doing to shoehorn the Aging Austrian Oak into this installment.

Further, the history and development of the Connor family line is not interesting. Further still, John Connor is not interesting -- by which I mean, he has never been interesting, except somewhat marginally (in Terminator 2: Judgment Day) as an adolescent, and marginally more so (in the original Terminator) as a yet-to-take-place collision of Kyle and Sarah's DNA in a miscellaneous motel room somewhere in the San Fernando Valley.

The original Terminator, better than all of its successors, understood that John Connor is an idea, not a character. The subsequent narrative tension revolved around that idea, creating a polemic between, well, life and death, played out (none too subtly) in the battle of wills between a pregnant woman and a soulless (literal) killing machine. The original Terminator was thereby proper science fiction in a way that none of its follow-ups (save one) have been; this might explain why Harlan Ellison sued, because although Ellison certainly didn't invent time travel or robots, he has nonetheless achieved remarkable financial success in spuriously claiming to have invented science fiction.

The "save one" above is the weirdest -- yet ultimately, the most creatively successful -- non-Cameron Terminator property: The Sarah Connor Chronicles. The two-season Fox TV series is not, by any means, terrific; it took eons for the series to work out what it was trying to do and accrue enough rogues in its rogues' gallery to make up sufficient ballast for the fact that crazy Sarah Connor is not, herself, an interesting series lead.

But the one thing TSCC understood in great clarity, and made ample dramatic use of, is the fact that contained within the mythology of The Terminator there are not one, but two, omega-level events that ultimately challenge the fate of the human race. The first one, the one that everyone knows about and still references in any casual conversation of the predominance of artificial intelligence in the modern world, is Skynet's nuclear war against the human race, at the moment Skynet became "self-aware."

The second omega event, however, is the use of time travel itself: that by sending a T-800 back to 1984 (and a T-1000 back to 1991 for some reason) in a Hail Mary attempt to save itself from a decisive human victory in the ground war that followed Judgment Day, Skynet shattered the space-time continuum. The Sarah Connor Chronicles figured out (in its very first episode) that once time travel is in play, the logistics of tinkering with history immediately become a shell game. To be fair, the otherwise execrable Terminator 3 kind of got there, too: just because you've prevented Judgment Day once (in Terminator 2) doesn't mean the timeline can't be rewritten again another way. There is, as they say, no fate but what we make for ourselves: and The Sarah Connor Chronicles took that phrase literally. In fact, the TV series essentially knocked the tail end off the sentence, too: there is no fate, period.

This resulted in a show where Sarah (Lena Headey), John (Thomas Dekker), and John's cybernetic protector / sometime sexual playmate Cameron (Summer Glau) capered around the American southwest trying to wage incremental war against the future building blocks of the Skynet apocalypse. Having already won the ground war against Skynet in (John's) future, the gang was consigned to wage a time war against the machines in (our) present, and all within the immutability of John's "destiny" (if such a word can even apply here) to go on to lead that selfsame ground war, someday. Predestination paradoxes were made and broken in every other episode; soulless fate and duty were pressed repeatedly against human choice and meaning; and Brian Austin Green was, improbably, a badass.

The point is, it was a noodle-baker of a show, and great science fiction, even when it was only halfway up the achievement scale as a piece of drama. And it slipped the bonds that have chained every prequel since The Phantom Menace: by dint of its own scenario, The Sarah Connor Chronicles wrote itself a license to disregard continuity completely, and thereby arrived at something all stories should, in theory, give us: a plot where we don't know the ending in advance.

(The bitterest irony, then: the series was cancelled after a honey of a cliffhanger which poses the biggest "what the fuck / where is this going?" question of the whole Terminator saga. And because we don't know the ending in advance... we never will.)

To return to Terminator Salvation again: The Sarah Connor Chronicles' under-the-radar meandering through the canon of the Terminator franchise credibly demonstrated Salvation's biggest lack. Salvation added nothing to the story that we didn't know about, besides how Kyle Reese learned that it's a good idea to tie your gun to your wrist. This is why the much-discussed "original ending" of Salvation -- in which John Connor is killed, only to be replaced by (the terminator) Marcus Wright -- is still a better idea than a terminator learning to care, juuuuuust enough to donate his organs to Connor to keep the ground war going. A machine pretending to be the leader of the human resistance might or might not have been a good direction for the story to go, but it would have been a further step in the time war's endless iterative destruction of the "real" version of history, rather than a senseless recapitulation of everything we already knew to be true.

The challenge for Terminator 5, then, is simple: use the tools that have existed within the franchise since its very beginning -- since naked Arnold wandered out of that vacant black dot -- and take the story somewhere it hasn't been before, because nothing has to have happened the way it has to have happened. In all of franchise filmmaking, Terminator occupies a truly unique space. It is a story beholden to absolutely nothing, besides the basic building blocks (time travel, robots, and humans with guns) of its own original entry. I don't think a new, good Terminator film is impossible; I just think it's a long time coming.

Do you feel this content is inappropriate or infringes upon your rights? Click here to report it, or see our DMCA policy.
Arnold SchwarzeneggerTerminator 5The Sarah Connor ChroniclesThe Terminator