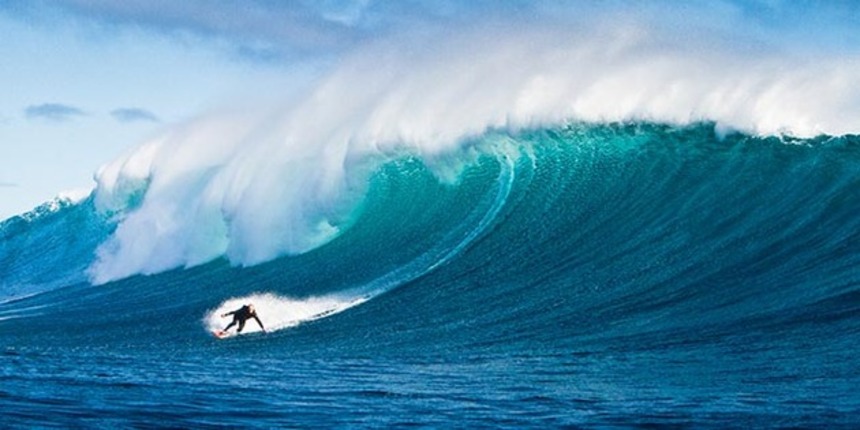 Plenty of arguments have been made about the merits of our current 3D cinematic boom. While much of the talk focuses on ticket prices and the gimmick factor, one common discourse is that the experience of watching a film in 3D actually distracts the viewer from the story being told. The argument goes that if the viewer is busy saying "cool!" then the story's curtain of escapism will be torn away.

It's in a new wave of documentaries that we have seen the most successful implementation of 3D thus far. Wim Wenders' modern dance doc Pina led the way with a remarkable cinematic experience that was enhanced by its 3D cool factor without the trapping as a narrative distraction. Yet to truly take off, sports documentaries are bound to be a sub-genre that utilizes the technology to its best effect. That is most certainly the case with Justin McMillan and Chris Nelius' Storm Surfers 3D. Filmmakers take note: This movie defines a new generation of 3D action-sports filmmaking.

The escapist curtain may have been ripped away by the "wow" factor, but there's still a compelling story that's told in Storm Surfers 3D. The film throws us right into the crazy lives of famous Australian big wave surfers Tom Carroll and Ross Clark-Jones. These best pals were fixtures on the surf competition tour in the 80s and 90s and then transitioned to big wave riding when that took off in the last decade. Now they travel around Australia with their trusty storm forecaster Ben Matson in tow, hunting for the craziest waves on the planet.

The guys have a natural dynamic that makes it fun to just hang out with them as they goof around or discuss the old days. Their ideas on manhood and the difference in their outlooks on risk as they careen towards middle age makes for very strong narrative backbone. But let's be honest, what you really want to see in a 3D sports movie is the action, and in this department, Storm Surfers 3D does not disappoint.

From beginning to end, this is some of the most impressive surf photography around. The waves are enormous and the scale is brilliantly defined with the fantastic 3D. Never has a movie theater felt so much like the open ocean when the waves project and recede from you. The film is some kind of cruel dance between wanting to hide your eyes from the gnarly wipe outs (and there are a great deal of them), and not being able to tear your eyes away from the gorgeous scenery.

Both entertaining and engaging, Storm Surfers 3D is a new high water mark in action-sports filmmaking, and an experience not to be missed on the big screen.

Review originally published during the Toronto International Film Festival in September 2012. Storm Surfers 3D is now available via various Video On Demand (VOD) platforms, and will open theatrically in New York on Friday, June 14, before expanding in the U.S. Visit the official site for more information.