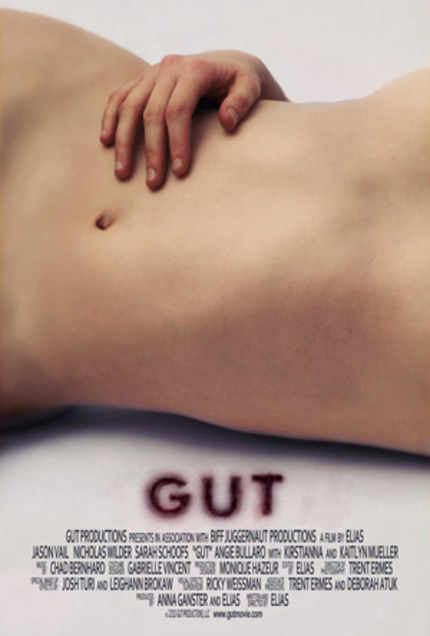 Independent horror films are a dime a dozen, always have been. It's quite rare that something appears that is actually worth talking about. While most no-budget horror features spend their time ogling tits, and bits and pieces of viscera, Gut takes a decidedly more introspective route, and is all the more noteworthy for it. Gut eschews the notion that the only way to make anyone pay attention is to yell and instead makes the viewer think, fear, and ultimately makes them question their own motives in a similar way to films like Michael Haneke's Funny Games. A minor achievement on its own, but hopefully just a starting point for director Elias, who seems to have a knack for making viewers very uncomfortable.

Tom is bored. Incredibly, unreasonably, irritatingly bored. His hot, horny wife, with whom he has amazing sex nightly, just isn't doing it for him anymore. His job, which pays him well, does little more than pass his time. Tom needs something to spice up his life, the only thing is, he doesn't know what it is. When his old friend Dan tries to liven things up with some underground horror videos, like in the olden days, Tom gets a taste of something new and upsetting, but something that he can't take his eyes off of. The disturbing nature of these repetitive videos purporting to show live vivisection begins to eat away at Tom's sanity, and Dan, well, Dan's got other problems.

Gut is not like most horror films. There is blood, there is violence, and there is tragedy, but not in the way we've come to expect. The horror in Gut comes from that place within most people, not just horror fans, that feeds off of the need to see what exists just beyond their own boundaries. The need to push ourselves to our limits, both physically and psychologically, is a very helpful one that is responsible for the great achievements of mankind, but it's the same urge that has driven some of the most heinous acts humanity has ever conceived. It's the ability to control oneself that differentiates between hero and villain, and we all fight that battle a little bit every day.

The film takes a rather unusual approach to the material. The videos in question are ostensibly faked snuff videos, though their veracity is what's in question and is ultimately what throws Tom into a tailspin upon having seen several. At first we are allowed only to watch Tom's reaction to the videos, distancing the viewer from the content and allowing us to imagine what is so terrible. It isn't until the videos, mostly silent but viciously meticulous in their gruesomeness, are shown to the viewer that the complicity begins. It's this sharing of the experience with Tom that makes Gut hit harder than it would without that crucial choice having been made.

In a world awash with backyard horror films with little more to offer than a couple of screaming broads and some ropey CG, Gut offers emotion, dark and potent. In places, the film even reminded me of Simon Rumley's powerfully abusive Red, White, & Blue, if a bit less violent. Don't go in expecting a polished studio feature (even by indie standards the film is stark) and you just might come out with a new flick about which you can tell your friends.

Gut is now available on DVD. For purchase information check the links below.