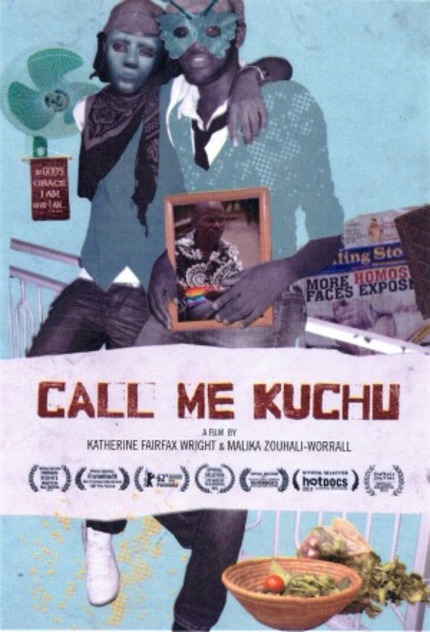 There hasn't been a lot of good P.R. for civil rights in Uganda in the last few years, what with its parliament's proposed legislation that would make homosexual activity punishable by death. Call Me Kuchu, a powerful documentary by first-time filmmakers Katherine Fairfax Wright and Malika Zouhali-Worrall, doesn't cast the country's anti-gay movement in a favorable light at all -- which is to say, it depicts the anti-gay movement fairly and accurately -- but it finds inspiration in the brave efforts of Uganda's small community of gay activists.

Taking its title from a Ugandan slang term for gays and lesbians, "Call Me Kuchu" focuses primarily on David Kato, the first openly gay man in Uganda (!) who serves as the LGBT community's unofficial leader. To the extent that there is a "gay agenda," David, soft-spoken yet forceful, is the one who sets it. He's joined in this by fellow activist Naome, who's a lesbian mother of two, and by a close-knit group of gay and gay-sympathetic friends.

Turning the tide of public opinion is, to put it mildly, an uphill battle. Some 95 percent of Ugandans believe homosexuality is wrong. The country is predominantly Christian and highly backwards in a lot of ways, which is a dangerous combination. Anti-homosexuality laws are already on the books, and gays are subject to open harassment. A tabloid called Rolling Stone (no, the other Rolling Stone was not happy about that) sprang up in 2010 and set to work on its agenda: publishing the names, addresses, and photographs of Ugandan homosexuals, perpetuating lies about their activities, and fueling hatred and fear. When a Somali terrorist group detonated bombs in the capital city of Kumpala, Rolling Stone said it was the work of gay activists -- a complete fabrication.

David, Naome, and their compatriots already had their work cut out for them when the job got even harder. A member of parliament introduced a bill that would dramatically expand the criminalization of homosexuality, and the bill seemed highly likely to pass. It would prescribe the death penalty for gays who are parents or authority figures, or who have sex while HIV-positive, or who prey upon minors. (We all agree nobody should have sex with minors. The problem in Uganda is that "gay = predator" is the prevailing belief.) The bill would make regular ol' practicing gays subject to life in prison; would require parents to inform the authorities if they learned their child was gay; and would demand extradition of Ugandans who did gay stuff in other countries.

As alarming as it is that such a bill would be proposed in the 21st century on the planet Earth by people who are capable of reading and writing, Call Me Kuchu maintains a calm, even tone. The editor of Rolling Stone -- a smug, pious bastard working very hard to repress his own homosexual feelings (one assumes) -- is given all the rope he needs to hang himself. Some virulent anti-gay preachers are likewise afforded the opportunity to state their beliefs. The filmmakers don't editorialize because there's no need to.

Fortunately for the viewer's blood pressure, the hatemongers aren't the main subjects. What we mostly see are David and the others going about their lives, filing civil suits against Rolling Stone, having parties where they can relax and be themselves, and discussing the daily challenges they face. The film covers a span of about a year, during which there are victories, setbacks, and significant tragedies. None of this is sensationalized any more than the haters' actions are, though the filmmakers are obviously sympathetic. What emerges is a compassionate, troubling, and ultimately hopeful story that is still unfolding in Uganda's streets, houses, and political corridors.

Do you feel this content is inappropriate or infringes upon your rights? Click here to report it, or see our DMCA policy.
DocumentaryKatherine Fairfax WrightMalika Zouhali-WorrallDavid KatoChristopher SenyonjoDrama

More about Call Me Kuchu