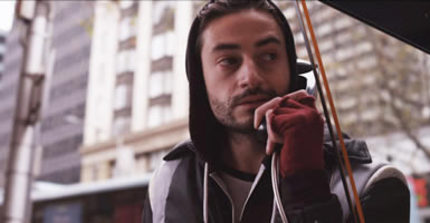 The world premiere screening of Vessel did not begin well. Out-of-synch sound forced the projectionist to stop film about 10 minutes in, and delay for half an hour while a back-up copy was found (I'm used to technical problems, so wasn't too bothered). Then, two patrons, whom I asked to stop their continuous talking through the false start, proceeded to bully me in both subtle and overt ways during the delay in order to get me to leave. Once the film started again, though, they were (mostly) quiet. I think this was due to the intensity and power of the film, which pulled their and my attention.

Ash is a kind of psychic, who can communicate with extraterrestrials through visions that come into his mind without warning. This had lead to the disintegration of his body and mind, as well as an inability to maintain healthy relationships with friends and lovers, who think he is a drug addict. When he hears that someone else like him has rid themselves of their 'power,' Ash must decide whether to follow in their footsteps.

The first thing that struck me was the excellent art direction, and its use of the cityscape. Although shot in Melbourne, it could be any large Western city. This space is grey and overwhelming, and Ash's frailty is framed against this concrete world. There is an excellent balance between these scenes and ones with Ash and other characters, such as his girlfriend and friends. The intimacy of these scenes is almost overwhelming: shown mainly in close up, the dialogue is minimal and affective, and you can feel the pain from both sides: those who want Ash to get help, those who have given up on him, and Ash himself, who cannot tell them the truth and so must play this part. As Ash tries to find the possible cure, everything around him seems to get much bigger, and actor Mark Diaco finds the perfect rhythm for Ash's slow breakdown.

On the surface, Ash's psychic ability would seem to be a metaphor for drug addiction. But I think it's more about mental illness (though really, it could be about either, depending on your perspective). Ash didn't have a choice about being psychic, the visions happen without warning, he is forced to give information to the government who do little to help him with the side effects, he uses a sleeping inhaler which doesn't seem to work, and he seems to be homeless. The visions, when they come, are intense and seemingly incomprehensible, though Ash suggests that he understands them, but again, cannot really communicate their meaning or importance. What do you do when you see things no one else does? Are these visions gifts or nightmares? Are they so much a part of you, despite their negative effects, that given a choice you couldn't let them go?

The story is incredibly well focused and tight in execution. It thrives on minimalism, with moody music that underscores the film, reflecting Ash's mood and state of mind without being overwhelming. There is some voice-over narration with shots of Ash wandering the city streets, a device that has been used before, but in Vessel, it doesn't feel tired or cliched; this time the spectator needs to hear and process Ash's thoughts, and again, director and writer Adam Ciancio keeps it to a smart minimum, giving only the bare essentials necessary, which works in the film's favour.

This is Ciancio's first feature film, and it is incredible, well assured and strong, one that I think will leave the audience talking afterward, about what they were do if they were in Ash's shoes, or what really happens in the minds of those trapped in mental illness or addiction.