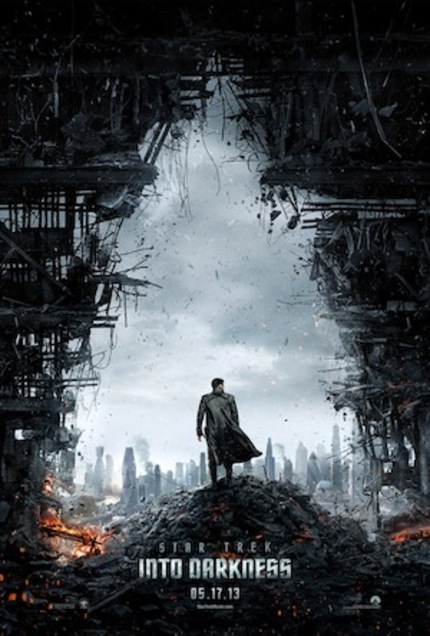 Star Trek Into Darkness begins with a thrilling chase sequence on a distant planet; a scene of immediacy and big budget spectacle. The film continues in this manner for most of its run time, punctuated by scenes that are less impressive and dialogue-driven. There is a bad guy (Benedict Cumberbatch) who makes things explode. There is a protagonist (Chris Pine) who tries to stop things from exploding with the help of his loyal crew. There is a bit more to this plot but not a great deal, and without spoilers Into Darkness can best be described as an insulated action adventure yarn that has great direction but a lack of scope. It is simply not epic; betraying the lore of 'Trek' and ultimately barely progressing past the first film.
Star Trek Into Darkness does not really go 'into darkness' per se - that deep unresolved, traumatic space where characters become irreparably damaged - a cornerstone of the 'gritty reboot' concept. Into Darkness instead keeps it light and action-heavy, while this makes it a definite crowd-pleaser and undeniably entertaining, it is essentially disposable fun that barely expands upon any element of the first film.
Just like the first film the excellent cast do their best to embody the classic crew; the results are decidedly mixed. Bones (Karl Urban) is hilarious and self-aware while Scottie (Simon Pegg) is embarrassing, but it looks like the cast had a really good time and these vibes transfer well on the screen. Then there is Cumberbatch's villain, who does not really convince; all his snarling and second-guessing and sharp tongued responses seem a little over-the-top at times, denoting his extreme intellect. Initially he seems to have a 'Joker'-level antagonist streak, but this at least, turns into something more original.

Meanwhile the emotional jostling between Kirk, Spock (Zachary Quinto, still excellent) and Uhura (Zoe Saldana) sometimes feels like a love triangle and Abrams does an excellent job keeping their complex relationships in check. Kirk himself barely undergoes any character development from the first film - he literally goes through the same sad sack bar routine, then after being reinstated remains impetuous and brash as ever. This could be pitched as a strength, however, with such a bullheaded protagonist with no disregard for safety so entertainingly balanced out by Spock's pure logic and reason - a relationship that is one of foundations for the original Star Trek and still works today. One serious issue is the basically pointless, barely justified plot device of the additional crew member Dr. Carol Marcus (Alice Eve), who brings down the film with barely any chemistry with any of the crew and a one note performance.
Like Star Wars, Abrams has inserted aliens in a lot of the background shots, there's even a night club scene that feels like a modern-day Tatooine Cantina. The problem is given the human and human-like crew aboard the Enterprise, any incidental background aliens stick out like sore thumbs and border on parody as it is difficult to take them seriously.

Likewise, the rest of the supporting cast from the Abrams-Lost verse can't seem to shed that skin - recognizable from his other work they continue to be emotional dredges or one-note stubborn characters. Abrams also brings with him multiple Lost alums; Michael Giacchino's score, writers (Damon Lindelof and others), and the auteur style that is starting to feel old already; including stodgy overly manipulative camera angles and that goddamn lens flare.
On the other hand, Abram's direction is is not without its strengths and Into Darkness is not only well paced with truly impressive blockbuster action scenes, it is also imbued with clever homages to the original series and films that fans will truly appreciate. Like Joss Whedon's Avengers it is great to see this level of dedication and detail. For the non-Trekkie's there are still superbly crafted action scenes to absorb and some startling misdirection that will impress.
Ultimately Star Trek Into Darkness ticks all the boxes of a superfluous blockbuster film. There is nothing wrong with this, but the title really held the promise of a far more imposing event that does not really come to fruition. For most, to be in the world of these legendary characters of the Star Ship Enterprise is justification enough for this film to do what it does as a second franchise film.
Star Trek Into Darkness opens in cinemas this Thursday (9/05) all over Australia.
Sign-In to Vote
Tweet 0 Submit

Do you feel this content is inappropriate or infringes upon your rights? Click here to report it, or see our DMCA policy.
into darknessjj abramsstar trek

At least, the reign of JJerror is over

But I am getting a 'Quantum of Solace'/'Iron Man 2' vibe from this. The difference is that those movies were rushed while its been four years since the last Star Trek. Keep in mind, I lovee the first film but I'm baffled by the narrative choices with its sequel. I think the novelty wore off with the nods and Easter eggs.

I think JJ will do fine with Star Wars. Even then, like what Faraci stated on twitter, he's going to be on a leash by Disney and Kathy Kennedy. It might r a Zach Snyder/Superman like situation. Furthermore, JJ has been handicapped by Orci and Kurtzman for way too long. They can write fun character dynamics but they're not a good match for Star Trek's type of storytelling.

Watched Star Trek: Into Darkness on Monday night, it was pretty awesome. Definitely Nu Trek (very fast paced and takes place over a really compressed time period) BUT the ending definitely sets up the direction of the next few movies . Loads of in jokes and throwback references. Don't want to spoil any if them, but they were all great.

If you hated the first JJ movie, you're going to hate this one, if you loved the reboot then you'll really enjoy this. Personally, I loved it.

I hate to ask this but did you happen to see it in 3D?

I'm not too surprised by this review.

I was a big fan of the first JJ Star Trek but as we've gotten closer and closer to this coming out, I haven't found myself to be too hyped up for it.

I definitely agree with whichever poster mentioned this movie could be similar to Iron Man 2 Quantum of Silence and, like that poster said, this Star Trek film had a lot longer time to get things right than the other two.

Check out my foreign and indie film blog www.lostinthemiso.wordpress.co...

Does anyone know which IMAX theaters are showing this in 15perf/70mm?

Why must every franchise in history now hinge on terrorists vs the good guys? If that is what this film is about I probably won't see it. I did like the first one though. (apart from those FUCKING LENS FLARES).