Review: BLACK ROCK, A Survival Thriller With Too Few Thrills 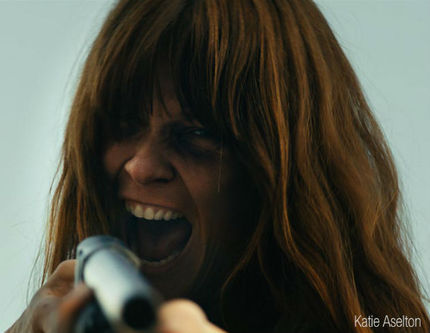 In her first directorial turn, actress Katie Aselton impressed indie audiences with her relationship comedy The Freebie. Looking to go in a completely different direction with her sophomore effort, Aselton and husband Mark Duplass worked up the outline for a survival thriller. Duplass wrote a screenplay and the indie finance engine that the Duplass Bros. have nurtured kicked into high gear. Less than one year later, we have Black Rock. While this deserted island chiller has some good moments, it's hard to walk away without thinking that just a bit more time in development could have made this a much better movie.

Things begin when Sarah (Kate Bosworth) goes to great trouble to assemble her two best friends Abby (Aselton) and Lou (Lake Bell) for a camping trip. The problem is Abby and Lou have been feuding for years and being tricked into camping together isn't going to go far to mend their issues. Sarah gets her way through hilarious means and the girls board a boat for a small deserted island off the coast of Maine.

Personal conflicts make up the bulk of the first act until things take a dramatic turn when we learn the girls aren't alone on the island. Three recently discharged veterans come wandering into the girls camp, weapons at the ready. One of the soldiers happens to be an acquaintance of the girls' from childhood and the stage is set for a night of drinking around the campfire -- until something goes horribly wrong and the girls end up fleeing for their lives, seeking refuge in the woods, and eventually coming to the realization that if they are going to survive, they are going to have to fight back.

The film is at its best in some of the story's early moments. All three actresses do very well and Duplass and Aselton have fun with the three catty bitches dialog. The problem is that this all but disappears when the girls become prey. Realistic? Sure. But it's not nearly as fun.

The survival thriller elements do their job of providing thrills, but they do little past that and the film fails to hit many original notes. A little extra work to build the soldier characters could have gone a long way. A complete lack of mystery elements (Could these guys be more than they say? No. Could it be a haunted island? Nope.) also hurts the chances of really engaging with the plot.

As the story goes, Duplass penned the script on a single flight. It shows. Decisions like letting the action stretch out over multiple days instead of one nervous night detract from the intensity and causes this thriller to be much less thrilling. Aselton has given us a just fine survival movie here with a few moments of fun, but this might be one of those rare occasions where having the clout to fast track a movie (even a tiny one like this) actually hurt the final product.

Review originally published during the Sundance Film Festival in January 2012. Black Rock opens in limited theatrical release in the U.S. on May 17. It will also be available to watch via various Video On Demand (VOD) platforms. Visit the official site for theater listings and more information.