NYIFF 2013 Review: OONGA Is A Little Boy's Dream Made Real 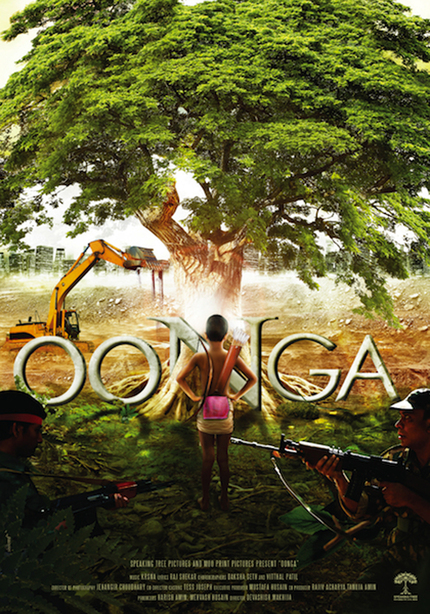 No matter where you come from, children are all the same. Mischief is their main motivator, and it is everything for them to feel a part of something. When a young boy, Oonga, in a remote rural village discovers that he's missed his class's trip to see the Ramayana performed on stage and the other kids tease him, he's not about to take it laying down. So begins an epic unplanned journey, fraught with danger and adventure, across Orissa in the eastern part of India, for this boy to fulfill his destiny alone. All of this youthful adventure plays against the topical backdrop of Naxalite (Socialist) rebels infiltrating small villages and those villages then being destroyed by the fighting between the rebels and government agencies.The result is a film that's not entirely kid-friendly, but not entirely out of reach, either. Oonga is a complicated tale of a complicated existence in a place where simplicity still reigns.

There are really two colinear stories happening throughout Oonga, the story of the titular boy, and the story of the rebels and the government soldiers hunting them down. These stories weave in and out of one another with relative ease, with Oonga's village having become the latest target of the rebels, and Oonga's travels away from his village coinciding with the rebels moving in. This isn't a subtle film, by any means, but it does manage to explain with relative clarity the nature of the conflict between the Naxalites, the government, and the villagers who want nothing more than to be left alone. Leave it to the government, of course in cahoots with big business, to make that difficult as "the company" attempts to usurp the villagers' land in order to build a bauxite mining site.

The geography and languages may be different, but this is very similar to the stories we hear 150 years later about our own "Indians" being tricked and scared off of their land in the mid-19th century by our own government. It, unfortunately, plays out much the same way those did, through intimidation, fear, and unprovoked violence. The story takes bits and pieces from the Ramayana to make its points clear, this could be a dangerous tact when courting non-Indian audiences, but thankfully we are given something of a Cliff's Notes version of the tale vicariously through Oonga's eventual viewing of the epic on stage.

Oonga's strengths are many, there is a strong cast, strong emotional anchors in the characters of Oonga and his mother who doesn't know where the boy has run off to, clear and concise storytelling, and gorgeous cinematography to remind us just what it is that these villagers are afraid of losing. The beauty of the film is non-stop, the landscape of rural India is breathtaking, the journey to the nearest town for Oonga is gorgeous, and even the eventual scenes of big city madness as personified by the whiz-bang lights and sounds of a carnival are engrossing. Of all of these strengths, though, it is little Oonga who holds the film together even as the grown-up world seeks to destroy this precious natural beauty.

The film's final act is an amazingly precious extended sequence in which Oonga, freshly painted and dressed as Rama upon receiving inspiration from the play, returns to his village and is praised and worshiped by strangers all along the way. Oonga, believing that he has become Rama in the way that only young children have the capacity to do, is determined to protect his village and his family when the Naxalite/Army conflict comes to a head. What happens next is tragic and redemptive, a conclusion that is all too real coming from the mind of a child, and it serves as a cautionary tale that will likely go unheard by those who need it most.

People in this country, if they think of India at all apart from being the land of endless call centers, tend to forget that it is a very young nation. Though the culture, art, and religion are all ancient, this autonomy is still only 65 years old, and so it follows that there are still growing pains to be felt. Sixty-five years after the US became a sovereign nation, we were doing the exact same things to our native population, only we were outsiders, in India, the pressure comes from within, from the forces of "progress", and from the international marketplace. Oonga is very much a reflection of that dichotomy between the New India and the Old India, and why they struggle so much to speak the same language, both literally and figuratively.

Oonga may not be easy to find, but it is worth the search if you're looking for a snapshot of what's happening outside of the bright lights of Bombay.