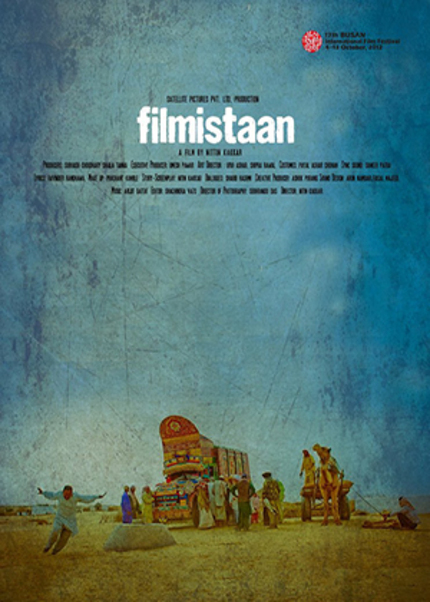 I've made allusions to the absolute mania that follows Bollywood stars around the globe, but it's hard to truly express what that is like to someone who is completely unfamiliar with this singular phenomenon. In India and South Asia in general, film stars are revered as divine, as such they inspire devout devotion the likes of which American film audiences just don't understand. Have you built a literal shrine to your favorite actor lately? Very few of us understand this kind of passion, but even those would be astonished by the passions of South Asian film fans. Thankfully, I now have Nitin Kakkar's Filmistaan to show just how powerful the cinema of India is in even the most unforgiving of circumstances.

Sharib Hashmi is Sunny, one of the millions of film obsessed peons living and working in Mumbai. Sunny's only passion in life is film, he goes to auditions every day and supports himself by doing the work of a peon on film sets whenever possible, just to get a foot in the door. One day his friend imparts upon him the knowledge that many of Bollywood's great performers got their starts as assistant directors, and so Sunny's path is set. When he's approached by a friend with an offer to work as an AD for an American documentary film crew in Rajasthan, he jumps at the chance. Things are going well for a minute, but when he's accidentally abducted by a group of tribal militants near the Pakistan border, Sunny is suddenly a prisoner of war.

Bollywood films, and western entertainment in general, are banned in Pakistan, so when it comes to light that filmi fanatic Sunny is being held at the estate shared by a Pakistani pirate DVD salesman, the wheels start to turn and what could have been a tragedy becomes a comedy. The pirate Aftaab (played by Inaamulhaq) finds out that Sunny works in the film business and a fast friendship is born. Set against this kind of bonding is the the militant who has asserted control over the home and attempts with his might to snuff their passion for forbidden "western" fruits. This conflict controls the film, and sheds light on the inanity of said religious and cultural fervor, only managing to highlight the fact that film conquers all.

Filmistaan is a movie of many memorable moments. There is most definitely a plot through-line, but the relationships at hand are defined in numerous vignettes, sometimes humorous, sometimes tense, but always managing to build on what was there before. One scene, in particular, stands out as emblematic of both the divide and possibilities for reconcilliation between the two brother nations. One evening, while showing a pirated copy of Salman Khan's Maine Pyaar Kiya to the local villagers, Aftaab's DVD copy loses sound, nearly sending his audience into a violent revolt. Who should come to the rescue but our dear Sunny, who has, of course, memorized the entire dialogue of the film. Sunny intercedes and replaces Khan's overempassioned line readings with even more overempassioned line readings of his own, winning not only the admiration of his audience, but their affection as well. These small moments build to show a relationship between these two men that is an unbreakable bond, solidified by their unobstructed zeal for the cinema.

When the time comes for their eventual escape, (not a spoiler, quite evident within the first reel of the film) it is Aftaab and Sunny who cross the borders, both metaphorical and literal, to rejoining these nations that share so much history. The animus between Pakistan and India is nothing new, it's been brewing since the very day of The Partition in 1947, a fact that is spelled out perhaps a bit too blatantly in the film, but it is a result of contrived differences. These are two nations who share a common culture and history, only differing in the administration of their religious beliefs. Hell, even their common languages, Hindi and Urdu, are so similar when spoken that they hardly pose a barrier to anyone.

It seems unbelievable, even to me, that it could take something as simple as cinema to reunite two nations so bitterly at one another's throats. However, a movie like Filmistaan makes you want to believe that it could be that easy. These are two nations with more in common than in difference from one another, and perhaps opening the channels of dialogue in this small way would be a big step in what seems like an insurmountable struggle. The rhetoric is so toxic between the two nations that there are times that is seems nothing can cut through it, but movies like Filmistaan help so soften that disconnect between what the government says and what the people want. If there was justice in the world, the film would be shown in Pakistan, with Muslims sitting next to Hindus laughing at all the same jokes. Sadly, there is not, and we are left to imagine what could be. Thankfully, Filmistaan at least gives us an idea of could/should be and what violent silliness keeps it from happening. This is a fantastic film that consistently made me laugh while keeping me angry at the whole situation that exists. Kudos to first time feature director Kakkar for a debut worth seeing.

Do you feel this content is inappropriate or infringes upon your rights? Click here to report it, or see our DMCA policy.
Nitin KakkarSharib HashmiInaamulhaqKumud MishraGopal DuttComedy