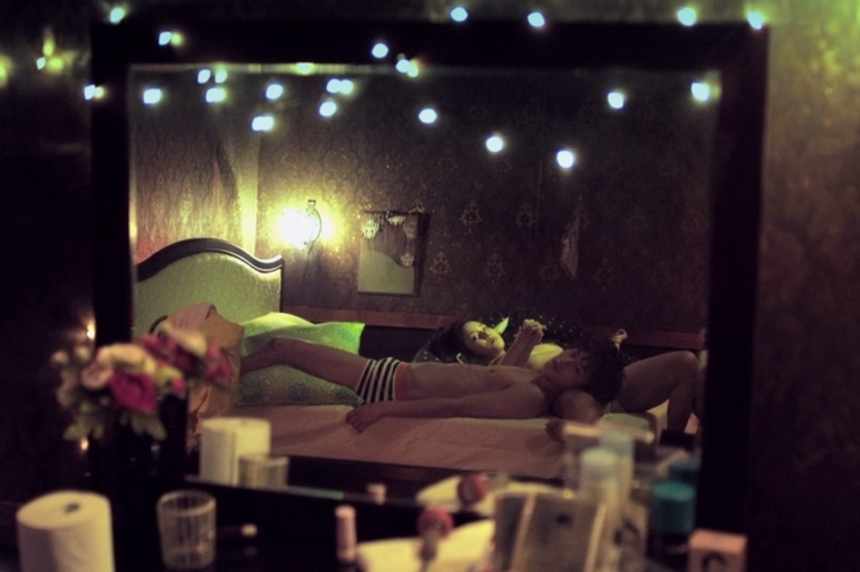 Every year, the Jeonju International Film Festival commissions a pair of omnibus features. The longest-running and most famous of these is the Jeonju Digital Project, which has featured a number of star Asian directors over the years. The other is the Short! Short! Short! series, which focuses on young Korean directors helming experimental works.

This year's edition of the latter featured three shorts and four directors tasked with adapting the works of popular local writer Kim Young-ha. Based on Kim's idiosyncratic stories, the works, each original in their own right, all featured a strong sense of style. Of course, as with many omnibuses, they didn't all hit the mark. Lee Sang-woo's opening segment Emergency Exit was my favorite of the bunch and also the best thing I saw at Jeonju this year.

I should disclose that I know the director quite well and that he included me in the special thanks of this work, though I had nothing to do with the project. In this thrilling short, a young and volatile couple can't keep their hands off each other. After the man names the woman's vagina 'exit', he convinces her to shave off her pubic hair. When she goes to work (she is a hostess at a bar), she is brutally attacked by a drunken client who mocks her hairless groin. Her lover and his best friend exact revenge shortly thereafter.

Lee, who has previously helmed Mother Is a Whore (2010) and Barbie (2011) among others, is known by some in Korea as a 'pervert' director: a moniker that he's quite happy to promote. His films are sexual, violent and border on very bad taste. Yet, due to their raw emotions and intensity, they are among the most thrilling films being produced in the country today. His works may depict obscene stories, but they are often based on real events and they are a product of a society with some severe social problems.

Emergency Exit marks the first time that Lee has not directed from his own story, though he mentioned during the film's Q&A that he wrote the scenario after reading only a summary of Kim's story. Immediately gripping and breathlessly paced, this short achieves more in 30 minutes than most films can in two hours. Combining the experimental style he attempted last year in Fire in Hell and Barbie's more formal elegance, this grimy new work marks a new stylistic benchmark for Lee.

It's messy, anarchic and depraved, yet undeniably poetic. Lee's camera perceives beauty in squalid and dank environs through an earthy aesthetic. With low, warm lighting, the camera highlights the fractured and fragile nature of youth as it seeks out characters around corners or through reflections. Further reflecting their volatile highs and lows is the film's exceptional soundtrack as it comfortably glides from grungy rock riffs to swelling string sections without missing a beat.

The film opens and closes with the bare-chested lead franticly running through the narrow back alleys of Seoul. The camera is attached to his head and sharply tilts left and right with each step that he takes. He is unable to escape from himself, perhaps in the same way that the director can't shake away from his own 'perverted' sensibilities. Lee is firing on all cylinders with a work that plainly shows his desire to break boundaries and push himself as an artist. A thrilling addition to his growing body of work, Emergency Exit is not to be missed.

Do you feel this content is inappropriate or infringes upon your rights? Click here to report it, or see our DMCA policy.
emergencyfilm festivaljeonjujiffkoreakorean filmlee sang-wooshort! short! short!