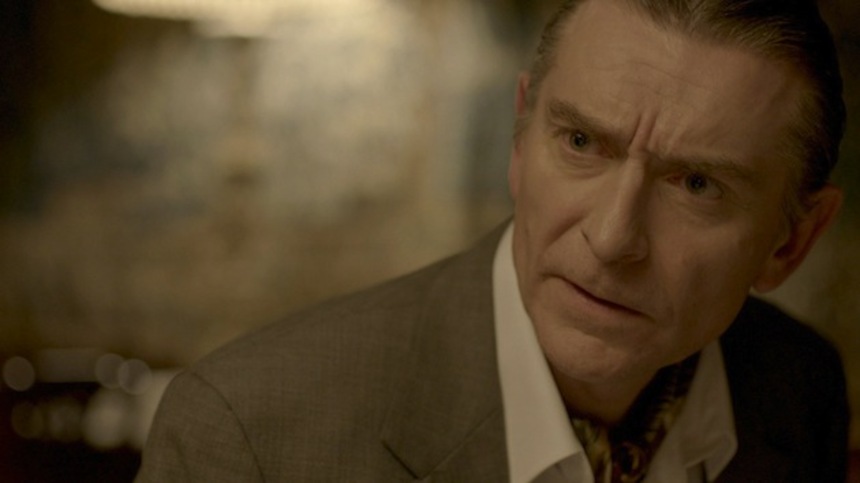 If there is a lesson to be derived from Jason Mann's whimsically morbid short film Delicacy it is to expect the unexpected... and to relish it.

Premiering last fall at the Telluride Film Festival, I saw Jason's film during this year's Tribeca. For those of you out there that may be attending the Newport Beach Film Festival, it plays tomorrow evening in the shorts block Shorts With A Twist.

Delightful and dark in its humor, Delicacy follows Avery, a food connoisseur of the highest order, and his dutiful chef Jonathan as they hunt for "the meat of meats". I found the short to be an absolute standout in Tribeca's shorts programming because it created a whole world and a truly immersive experience in just ten minutes. This may seem like what a short film should always strive for, but time and time again it is what many shorts are unable to achieve simply because they overstep their boundaries with too many ideas still in the mix, not defining and separating one core idea, which will ultimately lead to a solid short. In other words, Delicacy commits to the bit and runs with it. I think you get a good sense of that in the trailer, which I have embedded below. Being so elated by such a compact yet complete film going experience, I was then pleased when Jason said yes to my query for an interview. What follows is our chat about the rhythmic relationship between music and movies, the power of collaboration, directorial interpretation and the experience of shooting on digital when you're really a celluloid freak.

TWITCH: What's your background and how did you find yourself making films?

JASON MANN: My background is really in music. I've played in numerous bands since I was quite young, since I was about nine years old. In a way, it feels like a very gradual evolution from music to film. To make films and to write and perform and record music feels like a similar process to me. But I'd also been making totally unprofessional videos and sorts of experiments with cameras all of my life too.

Certainly the rhythms one can derive from a film and a song, or the process of creating, can fall into step in similar ways. I'm curious about the world and the story that you and your collaborators have created here. It is so particular, you get such a strong sense of that even in ten minutes. How did this come to be?

It was totally [co-writer] Frieda [Luk's] idea from the beginning. The film is quite literally an exercise for Columbia University's MFA film directing program. After the first year they have you do this project where you switch scripts with another MFA candidate. You're allowed to revise the swapped script, and, in this case, Frieda really allowed me to run with it and rewrite it, but it always had Frieda's initial idea intact. I was drawn to the idea because I felt that my natural inclination to the use of the form would marry well with the story. I always feel like the form of a movie needs to reflect the content and I have a very particular interest in a controlled use of visual language, in the use of the camera... that kind of precision. So it's best if I find stories that lend themselves to that kind of treatment. I try to make the form act as a kind of metaphor for the content. In Delicacy I feel like there's hopefully a relationship between the style and the content that adds to the humor. The camera is able to heighten the feeling of this world, which is highly controlled and refined, and then when this very strange element is introduced it hopefully makes for an amusing and humorous result... hopefully.

It certainly does. There's a further balance there that you and your actors and your crew strike in regards to grounding this world, and these performances in a believable place, yet of a place that has such a whimsy and darkly tilted sense of humor to it. How did you find your actors, and what was that working process then like?

We had an amazing casting director in Annika Magnberg. She was working for the BBC at the time, so we were able to hold some auditions at the BBC offices and other spaces around London. It was a fairly quick process. Particularly in the case of Richard Morse, who played the chef, he was someone who really amplified the character. The character itself on paper is a little bit thin. But when he came into the room he just breathed such a life into that character. The traits that he has really lent themselves to what that character really could be. It was a delicate balance though with him because he is a very funny guy and there was always the potential of going too far with the humor, so there was this question of "if he is cast in this world, can the movie still feel like something serious, even though it's clearly tongue-in-cheek?" That line of humor is so tricky.

It's tricky, but I think you all found a balance. The chef is the first character that gives us a sense that something awfully off-beat and strange is about to go down. His enthusiasm and his reaction to sharing this rare meat was the moment that really drew me in.

That first scene was workshopped for about six months. Written and rewritten. I even shot a test version of that scene with New York actors in a classroom at Columbia just to see how things would work; what shots the scene could sustain, what is going too far in terms of the humor and what is not enough.

In regards to preparation and collaboration, how did you start the process with your cinematographer Michel Dierickx?

Michel and I looked at a lot of films as reference, a lot of stills. I originally wanted to shoot this on film. To me there is absolutely no equivalent in the digital realm to celluloid. Digital cameras can look very crisp, they can look great in their own ways, but they cannot mimic properly the nature and quality of celluloid. So we looked at films like [Patrice Chéreau's] Queen Margot, where there is this kind of under exposure and very painterly way that the shadows bleed into the mid tones. That kind of photochemical processing of the image is something that can only be done with film , and that interests me. So that sort of stuff is what Michel and I were talking about. That kind of darkness. But because of the limitations of our budget we had to shoot with the Arriflex Alexa, which as far as I know is the best digital camera. There's less of a plastic quality when compared to something like the Red camera. Although I've seen people achieve some really varied and different things with all these cameras, so it's hard to say anything defeintivly. And they're being updated constantly. The only thing that will remain true is that something digital will never exactly replicate the capabilities of the film.

Let's talk a bit about the main location. It is a very real forest, a very English forest, nothing there is really going to indicate the fantastical elements that we're about to be exposed to.

I've been preparing a feature for about five years now that is actually set in England. I had been scouting locations for that about a year before Delicacy... which means that's three years ago now -- I shot Delicacy two summers ago. When I came across Frieda's idea and thought about the process of doing this film I thought it would be a great opportunity to not only go back to England. Not only was England really right for the material, but also, perhaps a little selfishly, making this short film was a way to do more prep work for the feature and start to build a team out there. And since then the casting director and cinematographer and co-producer and others are all likely to become involved with the feature. But also in a budgetary sense, to digress a little bit, one of the reasons why we were also able to shoot in England was because I was being hired as a cinematographer on a feature and being flown to Nigeria, but had to stop in England to change planes. So I just asked them to let me stop there earlier, to take the two months that it would take to do pre-production and then shoot Delicacy. Tina Shand, the line producer, who became the co-producer, was a savior for the film. She brought the majority of the crew together and they worked extremely generously, essentially all of them for no pay. So Tina found several forests and the other producer Jessica Caldwell found several forests. The place that we used has allegedly been used in a lot of movies, and it lends itself to production in that there is a road that runs right down the middle and we could park the grip truck right near where shooting took place. It has a topography that rises in odd ways, which made for nice vertical compositions in every shot. That was something that interested me about this area, that we could have something vertically in the frame that would just add something that you don't normally find in a forest. It was able to feel slightly unreal without seeming fabricated

Will DELICACY continue on the festival circuit after Newport this week, or is it all about this feature now?

It's going to be at the New York International Short Film Festival at the end of May and I've applied to a few other fests, but really I'm completely focused on this feature that I am working on now. We're hoping to shoot it as early as October, so we're really running with it at the moment.

Well that sounds exciting. While I won't press further on what that is about, certainly keep us at ScreenAnarchy posted on it as it comes together.

Great, I will. Thank you so much for the support, it's been amazing.

Do you feel this content is inappropriate or infringes upon your rights? Click here to report it, or see our DMCA policy.
delicacyjason mannnewport beach film festivalTribeca 2013