Destroy All Monsters: Leo DiCaprio and the Myth of the Chick Flick 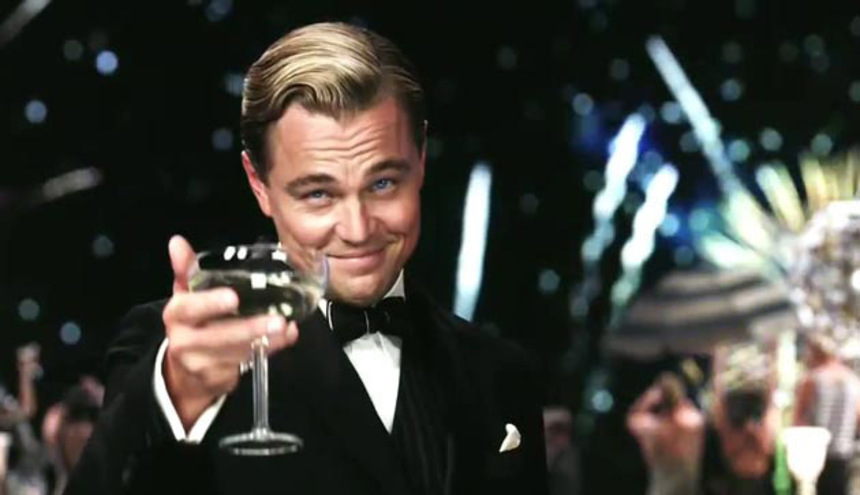 I have a running argument about whether or not movie box office is a zero-sum game. I tend to attack film earning potential from the "mother of two" perspective - which is that while yes, it's nice to believe that if a film is good it has a theoretically unlimited audience capacity, the reality is that if you're a member of a small family raising children, you get out to the movies once or twice a year, and doing so costs a hundred bucks and makes you not want to do it again for a very long time.

Film fans like to believe that they're the core of the moviegoing audience, too, but generally speaking they're not. Iron Man 3 isn't chugging towards a $400M domestic gross because of the vast and relentless supply of comic book geeks who are feeding their dollars into the till. It's getting there because - like all blockbusters - it's appealing to the base, drawing people to the multiplexes all over North America, rather than just on the coasts. And if you multiply the Middle America factor by the Mother of Two perspective, you get a throttle on how many movies per season can theoretically cross over from respectable earnings to Big Money No Whammies, because much of the base will only throw their money - and more importantly, their time - at a handful of movies per year. Hence the zero-sum game.

When something like The Great Gatsby happens (read Eric's review here), and everyone jumps up and down to proclaim that the film's unexpected financial success is because "it appeals to women," I rankle. Gatsby entered the summer in what looked like a lame-duck position in the tentpole tent, sandwiched between two films which were inevitably going to be among 2013's biggest earners (Iron Man 3 and Star Trek Into Darkness), riding on the back of a director whose last film (Australia) was a major flop, and a star who has not consistently crossed over into the Tom Cruise / Will Smith arena of actual moviestars, i.e. people who bring a certain size of audience to their pictures no matter what.

Gatsby nonetheless debuted to a larger-than-expected $51M over the weekend, which means that it clearly appealed to someone - a lot of someones - in a noisy box office field that was already choked by Iron Man 3 splashback. When you look at all of the May releases, though, it becomes easier to see The Great Gatsby as the "which of these things is not like the others?" variant in a field of very similar properties.

Gatsby is a bright and (literally) glittery period romance with a hip-hop soundtrack in a month choked with superheroes, space battles, and the Rock's hat trick performance in just the last three months. This summer is leaning disproportionately heavily on movies that seem to be made up of nothing besides people fighting and punching each other - even The Hangover 3 falls into the category, as the Wolf Pack takes on the Las Vegas mob or something - and hey, y'know what? It's springtime, and as the flowers bloom so do the hormones. People still need movies where they can go and make out and play with their cell phones in relative community, and maybe eat an ice cream afterwards. To say nothing of the obvious generality that not everyone can care about Iron Man and Star Trek.

I may believe that box office is a zero-sum game, but I also believe in quadrants. Actually, I believe that the four-quadrant notion is itself ludicrously simplistic, boiling people down into Siskel & Ebert binaries across their most basic attributes (Boy!/Girl! Young!/Old!), when the truth is that besides being a certain age and having a certain set of sexual characteristics, people can also be short, or sentimental, or tired, or gamers, or brunette, or opposed to the death penalty, or really into Hummels, or riding the high of their first pay raise, or they had their first kiss watching Titanic on opening day in 1997 and have made it a policy to see every Leonardo DiCaprio movie ever since, even Django Unchained, which wasn't terribly romantic - but made a lot of money.

Something about that broad, ubiquitous category of the "chick flick," though, is apparently too appealing to let go. It's so much easier to garret The Great Gatsby into that little cubbyhole as a cure-all explanation for its disproportionate box office might than it is to, say, canvas the marketplace as a whole and work out what need, or series of needs, that the Baz Luhrmann film might actually have been satisfying as a whole piece, besides the opportunity to stare at Leonardo DiCaprio's baby-blues, which - admittedly - are pretty entrancing. The same analysts happy to assert that Gatsby made money because Leonardo DiCaprio appeals to women never bothered to wonder if The Avengers made money because Scarlett Johansson appeals to men, although I assure you she does and it did.

Leaving aside the kind of thinking that leads us to adopt a phrase like "chick flick" in the first place - because it rhymes, so it can't possibly be reductive and sexist - there's something insidious about how casually the box office analysis over the weekend removed the need for any deeper consideration of how and why audiences are responding to the movies they're responding to. It's yet another way to ghettoize content, without having to earn the conclusion or support it. The Great Gatsby just gets filed away in its little box, with a tag saying that the normative rules don't apply - just like they don't with Tyler Perry movies or the Kirk Cameron Left Behind trilogy or Girls or The Twilight Saga or anything else that doesn't fit White Male Normal. It's a nice, subtle reinforcement of the brick walls of the status quo, i.e. You're Not This, So Whatever.

Do you feel this content is inappropriate or infringes upon your rights? Click here to report it, or see our DMCA policy.
Baz LuhrmannLeonardo DiCaprioThe Great Gatsby

More about The Great Gatsby

This guy is good.

As an introduction to your column, this was a fascinating read. Thanks, Matt. We're still waiting to see what Gatsby will do on home turf, but you raise some very interesting points as to the need it may fulfill and the positioning in the release calendar.

I also agree that the notion of pigeonholing the success of Gatsby in the "Chick Flick" corner is highly dismissive--but I think that after Australia, many don't feel Luhrmann warrants deeper critical investigation.

ha! i feel a little smile coming on. i watched 'australia' in theater
with my aunt, and enjoyed every minute. i will watch 'gatsby' at
some point, and look forward to it. i just hope it does the book
justice. i also think many just want a quick brainless flick with
action, explosions, and cheesy humor. i know i do, but give me
a character driven slow burner any day. good article too matt.

No one, and I mean NO ONE, has yet mentioned the advantage of 3D / IMax upcharging. Or counted asses in seats besides the $$ between the vowels.

The only truism I see: The most popular movies are always the BAD ones. It's a rule I bank on. I will NOT being seeing you this weekend at THE WRATH OF NU-KHAN.

So, go ahead - measure me. Figure me out.

I too enjoyed Australia. I think Australia flopped for a lot of the reasons mentioned above - it didn't fit neatly into a category (was it a Western, a romance, a war movie?).

Plus people do punch each other in Gatsby, however briefly.