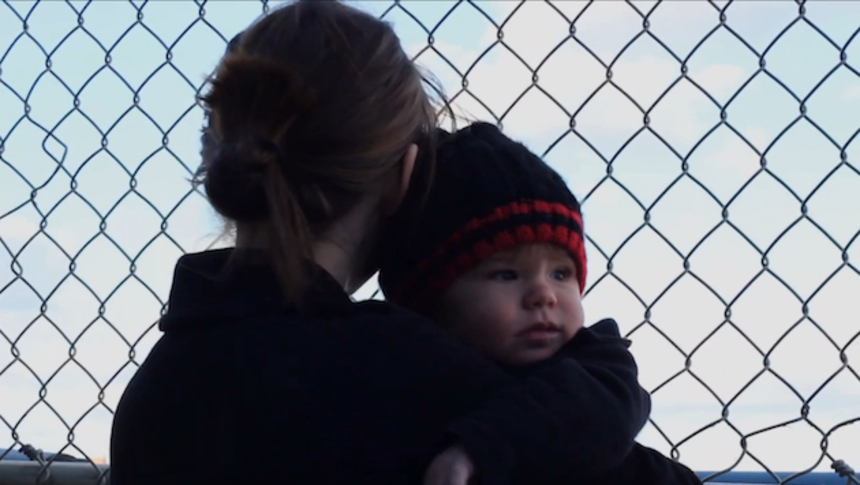 Bridges is a quiet, minimalist short film from critic-turned-filmmaker Christopher Bell. It's worth noting in these here pages because at its core it features a finely tuned, nuanced performance from the brilliant Joslyn Jensen. Those with their finger on the pulse of the current American Indie scene may recall Jensen's name from a few year's back when she turned heads in Mark Jackson's provocative and challenging psychological thriller Without. Despite gaining considerable indie buzz and winning numerous awards at festivals across the globe (it also remains to this day my favorite film of 2011) Jackson's film never saw a proper release stateside, and thus, Jensen has yet to have that breakthrough moment she so readily deserves. So while Bridges is by no means the film do to it (it is a short after all), her collaboration with Bell is more than a worthwhile way to spend a mealtime or afternoon break.

Bridges follows Jensen as a young nanny whose commitment to her infant charge is tested over the course of an afternoon. Bell's filmmaking, while a little rough around the edges, has a pensive gaze that is hard to deny. Its portrait-stye storytelling and thoughtful, open-ended questions around parenting, experience and loyalty makes it far less reminiscent of the so-called American mumblecore movement of the last decade, and more a parallel to European fare such as Chantel Akerman's fiction films (Jeanne Dielman) or the naturalistic narratives of the Dardenne Brothers (Rosetta, L'enfant). But please, enough words from me, watch the film for yourself below.

Bridges from Christopher Bell on Vimeo.

Do you feel this content is inappropriate or infringes upon your rights? Click here to report it, or see our DMCA policy.
bridgeschristopher belldardenne brothersjoslyn jensenshort film