Tribeca 2013 Review: The Bad Touch Leads To The DARK TOUCH 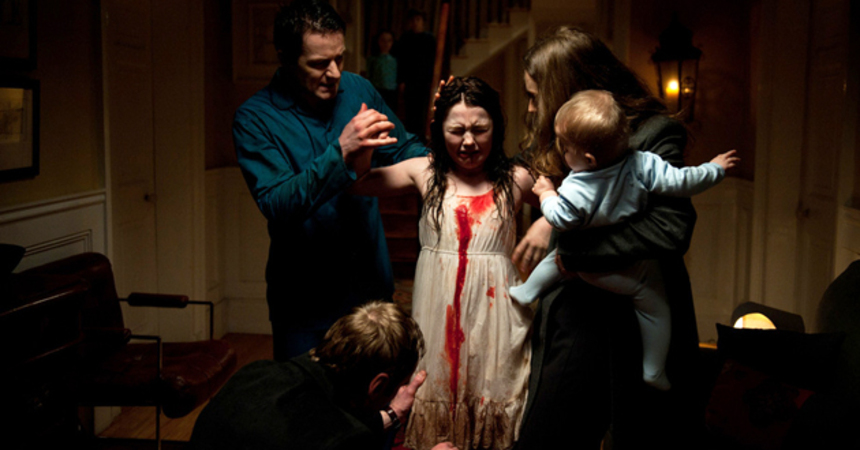 Six months from now, Kimberly Pierce's remake of Carrie will hit theaters and you've got to wonder--why? (Money.) DePalma's iconic adaptation is over thirty-five years old, and from the looks of the new version's trailer they're banking on young blood and bad memories, because it is beat by beat the same basic film. I don't care that they've gone "back to the book" and this version adheres closer to King's vision--that didn't stop The Shining mini-series from sucking. Why not make like a Python and do something completely different with the property? There's already been a shitty remake and a sequel to the shitty remake and even an ill-advised Broadway musical. You could do worse than make a movie like Dark Touch and slap the Carrie banner on it.

That's not to say Dark Touch is a Carrie rip (it's more of a Carrie/Firestarter/Children of the Damned blend). But it totally feels like director Marina de Van was influenced by the seed of King's story--that of a young girl who gets revenge on her abusers--and takes it in another direction.

The film starts off very promising with a stylishly directed opening scene. A young girl named Neve flees her home amidst shadowy figures and inanimate objects come to life. She takes refuge at a neighbor's, where she is later retrieved by her parents. But the next night (very same night?) the interlopers return, and as she tries to flee with her baby brother in her arms, the house becomes a monster, wielding furniture like weapons, killing her parents in a gruesomely inventive sequence that isn't topped for the rest of the film. (Maybe it should have been the climax? It felt like one, albeit a bit premature.)

They try to keep it as ambiguous as possible, but no, this isn't a "killer furniture" movie as the synopsis would suggest, and yes, the little girl is telekinetic. She's too young to "plug it up" and her dirty pillows are barely budding, which makes her ordeal even more harrowing. She tries to settle in with her new foster family, and things go well at first, but at the slightest clink of a belt buckle or sight of an unfooted shoe she loses control and the house starts to quake.

And this is where the film started to lose me, where it strays from the parameters set up by the first act and begins to break its own rules. Neve can't control her power, that's why she is so dangerous. So when she goes vigilante to help a pair of abused classmates, it doesn't quite work. If this was supposed to be the first step in the evolution of her powers and her ability to control them, it wasn't developed enough. Because next thing you know, she's pyrokinetic as well. And, oh wait, now she can control people's minds. It didn't feel like a progression.

I will say that the third act won me back over, and went to some interesting places. Instead of trying to top the carnage of the opening--which it couldn't--the film takes a weird left turn that I found quite appealing.

Marina de Van, who previously directed In My Skin, certainly knows how to make a good looking film, and is adept at setting up an atmosphere of dread and delivering visceral bursts of violence. But after you hook the audience with a visually arresting setup you have to follow it up with this pesky thing called a story, and this one just didn't work for me. Send this film back to the gym to tighten its midsection and you have the potential for a real stunner. Still, it's probably a whole lot better than the Carrie remake is going to be, and is definitely worth a watch for horror fans.

Joshua Chaplinsky is the Managing Editor for LitReactor.com. He has also written for ChuckPalahniuk.net. He might still be a guitarist in the band SpeedSpeedSpeed, and is the poison pen behind thejamminjabber, although he's not so sure he should admit it.

Do you feel this content is inappropriate or infringes upon your rights? Click here to report it, or see our DMCA policy.
Dark TouchHorrorMarina de VanTribeca 2013Missy KeatingMarcella PlunkettPadraic DelaneyCharlotte Flyvholm