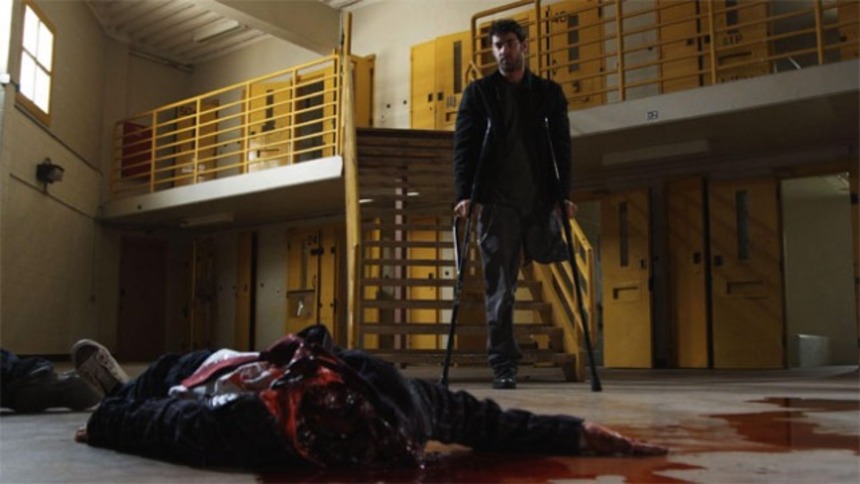 Paul Hough's The Human Race depicts a brutal, inventive competition that turns even the most compassionate and kind-hearted members of society into ruthless killers, bloody, exploded messes or, in some cases, both. As usual with this particular genre of action film, there is a hero among them, but, in an inventive twist, this time the resident badass is a man on crutches with only one leg. He's played by Eddie McGee, a talented actor who is actually one-legged in real life, and who previously proved his action star credentials in the short film The Angel, also directed by Hough.

The story is pretty simple. Thirty or so people black out and find themselves in a bizarre environment where a voice in their head tells them to race, then gives them a few simple rules:

Confusion then gives way to panic when one woman is shoved onto the grass and, sure enough, explodes in a geyser of blood.

Indeed, we're in Battle Royale territory here, and while the movie is never as biting or hilarious as that survival-of-the-fittest fable, Hough orchestrates his own film with a sure hand and brutal conviction to the demented premise. The Human Race is not a film where a character's fate is predetermined based on their "type," whether they are young or old or whether they are good or bad. In fact, probably one of the most effective aspects of the film is Hough's insistence that we do not live in a benevolent universe where the good are ultimately rewarded and the bad punished, or that anything actually happens for some lofty, higher purpose. Sometimes life is just shitty for no good reason.

The other aspect that stands out is Hough's integration of disabled people into the genre. As mentioned earlier, there's McGee,  who plays a no-nonsense, basically decent war veteran who lost his leg in the Middle East. McGee displays the perfect balance of toughness, decency and vulnerability needed to portray an action hero worth rooting for, and yeah, some of the ways he uses his disability to his advantage are killer. But Hough also throws two deaf-mute characters into the mix, and rather than simply adding them just for shock value, he delves into their psyches and their relationship with sensitivity and a fair amount of depth for the genre. Besides being far more interesting that the usual Joe Schmoes who end up in this type of situation, the characters also allow for a couple of masterful, extended sequences where the lack of any spoken dialogue does wonders to heighten the tension.

Generally, movies with what-if scenario's like this one fall to pieces at the end when everything has to be explained, or simply end abruptly on a vague note that asks the audience to make up for the filmmaker's lack of confidence. Hough impressively avoids both of these pitfalls, and while the final five minutes of the film aren't mind-blowing, they are satisfying and uncomplicated -- probably the best that one could hope for.

The ways that the film falters have less to do with what's on screen and more with the potential that never quite pays off. Hough begins the film with the requisite character development and exposition, but quickly pays a large portion of it off in a completely bold, unexpected way. Because of the way it's structured, this decision throws all expectations out of wack in the best way. The safe haven of genre conventions seems to no longer exist.

Unfortunately, Hough never manages to deliver the same system-shock again. As it progresses, he seems to become more and more interested in blowing up people and less interested in toying with audience expectations or adding levels of depth that might have made all the messy violence hit even harder. Beyond the not-so-revolutionary idea that survival competitions bring out the worst in people, Hough pushes most of the psychological and metaphorical implications of the premise aside in favor of increasingly predictable violence.

That said, while the film never quite transcends the genre in the ways that it could have, it's still an exciting, well-acted and extremely bloody slice of survivalist action with some nice surprises up it's sleeve. Also, Expendables 3 needs to get on top of casting McGee ASAP.