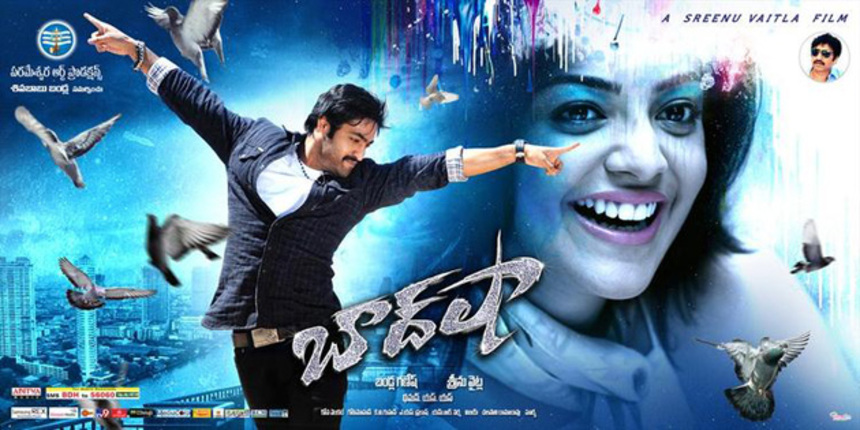 Something happened around the twenty minute mark of Sreenu Vaitla's new Telugu masala entertainer, Baadshah, that I wasn't entirely expecting. I had been watching intently, attempting to decipher the text without subtitles, hoping to get a firm grasp on the overly complicated plot, when I reached a point of Zen-like calm. The plot no longer mattered. The characters and specifics of the film became like white noise and what remained was a visual and aural bombardment of epic proportions. Not that the film itself was anything particularly outside of the box, in fact, if anything, Baadshah is a perfect example of the Tollywood formula film, it was greater than that. Baadshah is an idea, a perfect concoction of elements mixed just right to provide a familiar audience with a familiar experience that provides a welcome escape and opportunity to hero worship on a scale that we in the West just can't understand.

I'm not even going to bother with my own explanation or summation of the plot. The language barrier makes that a bit of a losing game. However, many reviews before mine have done a serviceable job with that, so here's a synopsis from The Hindu's review:

Rama Rao or Baadshah (NTR) is ambitious and wants to wield power in the mafia territory spanning across South East Asia and Hong Kong. His father (Mukhesh Rishi) runs a casino in Macau and is a trusted aide of Don Saddhu Bhai (Kelly Dorjee). Baadshah comes up with a ploy, strikes a deal with the Don, wipes out one of his opponents and takes control over the mafia ring in Macau. But soon the Don learns of his sinister plans and wants to finish him off.

The plot is all at once incredibly flimsy and unnecessarily over-complicated. It is an excuse to provide the Telugu audience with what they expect to see on screen, and to that end it works perfectly well. The key to understanding Telugu mass (popular) cinema is that, in the immortal words of Roger Ebert, "A movie isn't about what it's about, but about how it's about it",and nowhere is that more on display than here.

Newcomers to Telugu cinema (I know you're out there, I'm converting you one at a time) very quickly realize that these films are structurally unlike anything they've ever seen. A film's tone with careen from one extreme to another, seemingly recklessly, with barely a chance to take a breath. Baadshah is no exception. The film opens with a massive fight sequence, showcasing the wire-fu skills of lead actor Jr. NTR, Young Tiger to his fans, in which he saves his father from the clutches of an evil mafia don by single handedly destroying a virtual platoon of goons. These introductions are absolutely insane, and often ridiculous, and Baadshah's is actually relatively tame, but you can get an idea of what you're in for from this introduction from Jr. NTR's 2012 film, Oosaravelli.


These are common among Telugu "entertainers", films made for mass audiences looking for escapism, and serve to separate the audience from the actors as a way of keeping the illusion alive.

From the moment that Jr. NTR appears on screen as Baadshah, the mafia enforcer/boss is presumed to ultimately be the hero, even though we see him first in the guise of a criminal. This is the way Telugu cinema works, Jr. NTR plays heroes. In fact, Jr. NTR only plays heroes. He will occasionally play an anti-hero, a role that he seems to relish as he is often the impish sort on film (Brindavanam, Yamadonga), but in the end he is always shown to be a force for pure good, whether it is a police officer or a dutiful son, even though he may enjoy playing games in the meantime. There is no suspense in Baadshah, there is no real threat that the film won't end as we, the audience, need it to, with Jr. NTR on top, the only real question is how much we can please the audience between the opening and closing credits.

Part of this formula is the repetitive nature of film plots and tonal variations. For example, following the opening fight scene, the next hour of the film is an extended romantic comedy sequence. In fact, you could probably pull an entire romantic comedy out of the film and it wouldn't change the plot at all. Pan-Indian starlet Kajal Agarwal (Magadheera, Maatraan, Singham) plays the arm candy in this film, and she does exactly what she's expected to do, which is to play the foil to Jr. NTR's machismo and fall head over heels for his roguish good looks. She does nothing to move the plot forward, and if you removed every single scene with her in it, you'd still have a decent crime thriller. However, that wouldn't work for this audience, the romantic subplot is part of the package, as is the goofy comedy track. Imagine throwing scenes from There's Something About Mary in between the action sequences of The Bourne Identity, and you have an idea what what you're in for. It makes no sense if you attempt to parse it logically, but that's not the point. 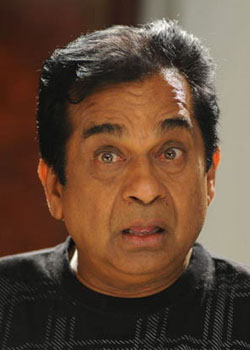 Familiarity plays a huge part in winning over audiences in Telugu cinema. It isn't just the crazy plot twists, it is the characters and character actors, most of whom appear in dozens of films every year, and elicit cheers simply by their appearance on screen. Baadshah has its fair share of those, as well, the king of the cameo being Telugu comedy icon Brahmanandam, who holds the Guinness World Record for most appearances in a feature film in a single language with over 900 roles in Telugu films. Brahmi (as he's known to most) appears in the second half of the film as comic relief, his deadpan delivery and dedication to every single ridiculous part he's given has made him an icon, and his face on screen brings cheers from the audiences of even the worst films. Brahmanandam is far from the only familiar face, but he's certainly the most familiar one in a film full of actors you'll see on screen ten or twenty more times this year.

It isn't just familiar faces that fans want to see, it is familiar situations and actions. In the case of a Jr. NTR film, fans want to see that motherfucker dance, and dance he does. Jr. NTR is one of Tollywood's most exciting dancers, in spite of his somewhat dumpy Average-Joe appearance, NTR can truly throw down, and we expect to see him dance his ass off in films. Baadshah provides several surprisingly well-integrated song and dance numbers into its nearly three hour run time, and each one brought waves of applause from the crowd as Jr. NTR shook his moneymaker with reckless abandon in intricately choreographed dance sequences taking place anywhere from Rome to the Alps to a Hyderabad discoteque. He is such as explosive dancer that the choreography smartly keeps him from sharing too much screen time with his co-star even during romantic sequences, for fear of making her look like she has two left feet. The first downbeat of a song before NTR even appears on screen is enough to elicit wolf whistles and cat calls in a cinema, as even the promise of a dance number excites a crowd, and after watching Young Tiger dance, it's easy to see why.

Which leads us to the final element that makes Telugu cinema unique, fan service. Now, I know what you're thinking, fan service has become an integral element of big action cinema over the last decade with filmmakers and producers stumbling over themselves to insert in-jokes into the latest big budget comic book movies. This is some next level fan service, though. Indian film audiences are rabid consumers, they consume any and all films with an appetite that would make even the most avid film fan in the west blush. As a result, the film heroes are their real life heroes, and the mere suggestion of a particular cinema legend in a film can bring those same wolf whistles that the actual star is hopefully bringing on his own. Case in point, Jr. NTR.

There is a reason that N.T. Rama Rao is known as "Jr." NTR, and that is the fact that he is the grandson of Telugu cinema's greatest legend, Nandamuri Taraka Rama Rao, or the original NTR. NTR senior was most famous for his portrayals of mythological and religious icons in films, however, his career spanned all genres and many decades. His spectre looms large over the Telugu film industry, and his grandson takes full advantage, invoking NTR's image whenever possible. In the case of Baadshah, there is a montage near the end of the film during which many women have gotten drunk through a spiked punch bowl at a wedding celebration and they decide to perform songs from classic NTR films. Each woman begins the dance solo and is eventually joined by Jr. NTR performing in the place of his grandfather, even so far as miming the exact dance moves of NTR from the films. The audience is so savvy to their own history that even here, 9,000 miles from Hyderabad in Dallas, they know every song, and by the time the first bar of music has finished, they all knew that it was an NTR song and the cheers and applause in the cinema were so loud that you could barely hear the actual music.

It isn't only Jr. NTR who can claim direct lineage to his celebrity grandfather. NTR's genetic run strong through Tollywood, and no less than half a dozen of his descendants, probably more, enjoy successful careers on screen. However, Jr. NTR seems to be the popular choice for his successor in this current generation of young actors. Fans want to be reminded of their strong and proud history on screen, and Jr. NTR is a willing and capable vessel for that pride.

In the end, the context of these sequences is irrelevant, the plot is irrelevant, even the specific characters, script, and direction are irrelevant. What matters is whether or not they got everything in. Telugu popular film is more of a checklist than an art form. Did we get the comedy track in? Did we get a schedule for Brahmanandam? Does Jr. NTR get enough dances? Are there enough action sequences? Did we blow up enough cars? If the answer to those questions is yes, then chances are you've got a hit on your hands. In the case of Baadshah, the answer is a clear "yes", and they even managed to do it with some style.

I'm not going to lie to you and say that everyone who ignores Telugu cinema is missing a crucial part of their life. There are millions of people who will find these films boring, poorly constructed, overlong, and amateurish. However, if you have the patience and constitution to immerse yourself in the world of Telugu cinema, the rewards can be great. Baadshah isn't a film that will win over any newbies, it is too deeply entrenched in the routine of Tollywood entertainers, but for fans of the style, it's a solid win.