Dallas IFF 2013 Review: SANITARIUM Is So Bad It Doesn't Deserve A Clever Headline 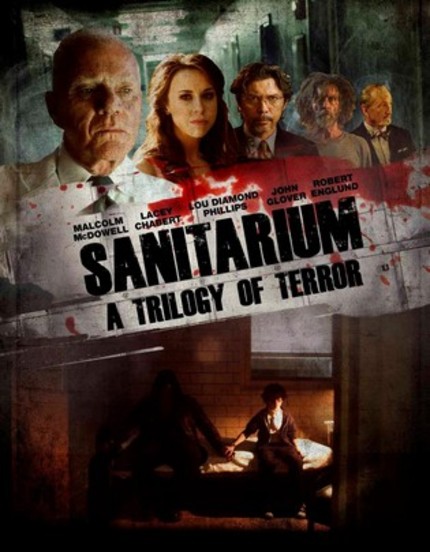 We're told over and over again as children that if we can't say something nice, that we shouldn't say anything at all. Thankfully the realm of film criticism is immune from this rule. If I were forced to review Sanitarium without saying unkind words, this would be very short. As it stands, I'm struggling to remember anything at all that I enjoyed about this ponderously paced abortion. Frankly, in a world which has produced dozens of horror anthologies over the last decade of wildly varying levels of quality, Sanitarium sits firmly at the bottom of the pile, and that's saying something.

The first face to which we are treated is that of Malcolm McDowell, which is surely no coincidence. McDowell is a notorious check-casher whose career choices would make fat Orson Welles blush. It's somewhat telling that McDowell doesn't appear in the cast line-up of the film's IMDb page, I wonder if that was a rider in his contract, that no one should ever be able to track him back to this piece of crap. McDowell plays the warden/overseer of the titular sanitarium, walking us through particularly heinous cases which are then expanded upon in 30 minute vignettes with all of the craft and subtlety of the most cringe worthy no-budget disasters of all time.

The three stories in Sanitarium are remarkable in their unremarkableness. None of the three are in any way interesting or engaging, and what's even worse is that they aren't in the least original. Of the trio, at least two of them owe lineage to a number of previous anthology projects. One involving a set of apparently sentient dolls links tangentially to both Trilogy of Terror and Tales from the Hood, although in the end it's all in their heads. I would say spoiler alert, but I don't care if I spoil this one. If that wasn't enough, there is a second piece about a boogeyman menacing a young boy with an abusive father that ALSO looks a bit too much like a segment from Tales from the Hood. Look, I get it, Tales from the Hood is an underrated gem and deserves more credit. This is not the way to get it. Thankfully the third segment is a bit more topical and involves the Mayan apocalypse, something that was not broached by Tales from the Hood back in 1995. Sadly, it, too, sucks.

I wish I had more good things to say about Sanitarium. However, as I sat there in the theater with a half a dozen of my friends sitting next to me, it was hard to justify it as just being me when two of them fell asleep and one just up and left. Sanitarium is poorly written, atrociously acted, barely directed, and worst of all empirically boring. If I've seen worse horror anthologies, I've forgotten them. In the meantime, all of those awful ones I've seen that I do remember can now breathe easily as Sanitarium has handily supplanted them in the pantheon of terrible triptychs.