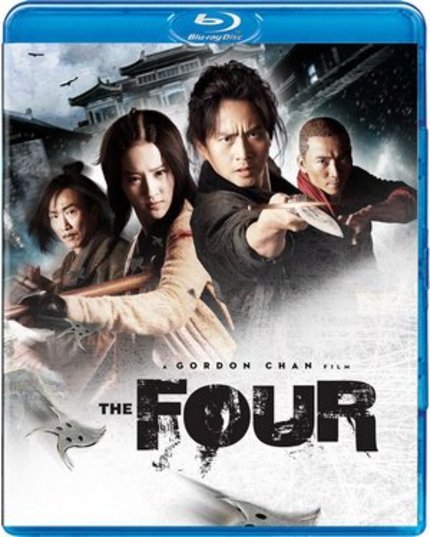 Coming to Blu-ray/DVD from Well Go USA on April 9th is Gordon Chan's fantasy action film, The Four. We've covered the film a bit, but haven't managed to give it a full review yet. I hope to remedy that in the coming weeks. In the meantime, Well Go have graciously provided us with the first peek at their US trailer, and it looks like it could be a lot of fun!

Gangs of spies. A royal secret service. A covert governing organization. A divine constabulary. Everyone wants to know about a stolen coin cast and a mysterious circulation of counterfeit currency. Every government agency and financial interest in the region has an interest and a plan. But this scam is only the beginning of their problems.

Something supernatural is happening. Someone is forming an army of the undead, created to crush anything that stands in their way, making their way to the capital.

They are kung fu superheroes. They are THE FOUR.

And they may be our only chance.

Based on the greatly-loved novel The Four Detective Guards by Wen Ruian, Gordon Chan's (THE KING OF FIGHTERS, PAINTED SKIN, THE KUNG FU MASTER) film adaptation is the first for the big screen, and the beginning of a planned trilogy.

I love these kinds of movies, even the bad ones, and this has all the makings of something very entertaining. The director of Fist of Legend is behind the camera and some serious ass-kicking in front of it should make for a fun ride! Be sure to check out The Four when it hits home video next week.

More about The Four