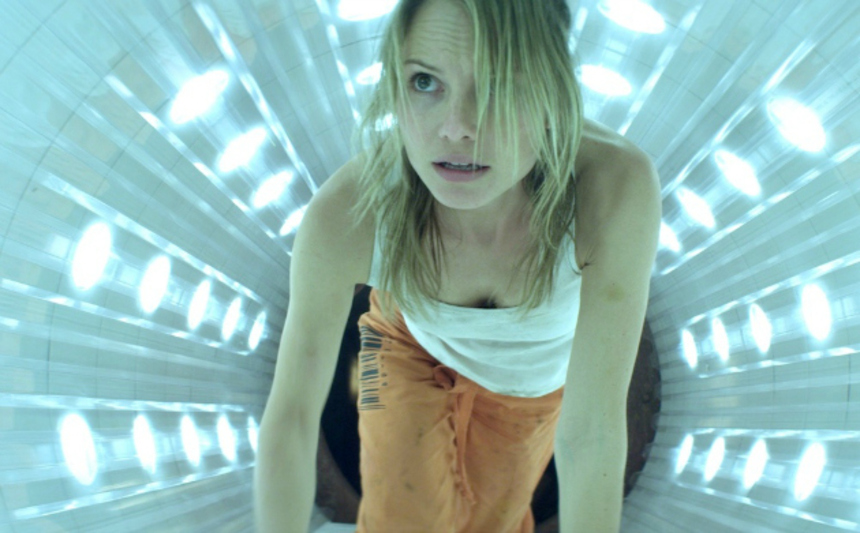 The aptly titled Aussie sci-fi thriler Crawlspace is probably about as much fun as a blatant mash-up of Aliens, Scanners, Event Horizon and the last Doom video game can be. Executive Produced by Greg Mclean (director of Wolf Creek), the film certainly crosses the line between homage and rip-off several times, and offers very few ideas of its own, but it still manages to wrap all of the aforementioned titles up into well-directed, diverting package.

I mentioned Doom in that list because the beginning felt like watching someone play it. Here, a number of soldiers are being sent into a secret underground science lab in the desert where the shit has hit the fan. There is a lot of yelling and shooting, and it's pretty much impossible to tell who is who or what the real threat is. We do know there's a threat though because some security camera footage at the beginning showed us, and also, there are dead bodies everywhere. We know it is secret because the opening credits told us.

After the initial hysterics and gunfire, one of the faceless, indistinguishable marines finds a woman who he swears is his dead wife. This naturally puts everyone on edge. Then a giant gorilla monster attacks! More gunfire! More yelling! The gorilla monster explodes and never comes back again, and for the life of me, I still can't figure out why he was in the movie. I liked him though.

It's at this point, about twenty minutes in, that the actual plot starts. It turns out that the lab was a center for psychic development, but that things have spun out of control, and soon the marines are battling not monsters, but figments of their imaginations and worst fears. All the while, they are, as the title suggests, crawling to escape.

Yes, whatever genius designed this lab decided that the best path to the exit would be a bunch of corridors about the size of ventilation shafts. Director Justin Dix and cinematographer Simon Ozolins make great use of the claustrophobic spaces to evoke fear and unease. In less-talented hands, such locations could have just devolved into a spatially confusing mess.

Credit Dix also for keeping the audience guessing, at least to a point. The film's crazy structure -- that is, begin with chaos and action and gradually reveal the plot -- creates a spooky sense of mystery and intrigue about the situation... to a point. But, Dix has more on his mind than a simple cat-and-mouse game in tight quarters and in order to get it all across, he weighs the film down with more and more exposition as it progresses. Even more disappointing is that all the explanations we're forced to sit through start contradicting each other, and soon it's hard to figure out what was explained, what wasn't and which explanations turned out to be a lie. It's also disappointing that most of it feels like it was lifted from Scanners.

As the narrative reversals continue, Dix introduces a few interesting ideas related to memory and perception. Rather than explore them though, he simply barrels at full speed towards the next twist, and ultimately, while the characters certainly say a lot of things, very few of them stick.

As derivative and badly plotted as it is, the film is still consistently thrilling thanks to the assured direction and a couple of inventive, extremely gruesome scenes involving hallucinations. If you've exhausted the classics and want a diverting sci-fi thriller that won't devolve into mind-numbing CGI and noise, Crawlspace is as good as any of them. Just don't expect to be thinking about anything from it the next day.

Except maybe the gorilla monster. What was that thing anyway?

Crawlspace is available on VOD in the U.S. It's still making the festival rounds in Europe.
Disclaimer: XYZ Films, where ScreenAnarchy editor Todd Brown is a partner, were the ones who sold the film to IFC, thus making it available on VOD. I just found this out. Take it how you will.
Tweet Post Submit

Do you feel this content is inappropriate or infringes upon your rights? Click here to report it, or see our DMCA policy.
BIFFFBrussels International Fantastic FestivalCrawlspace