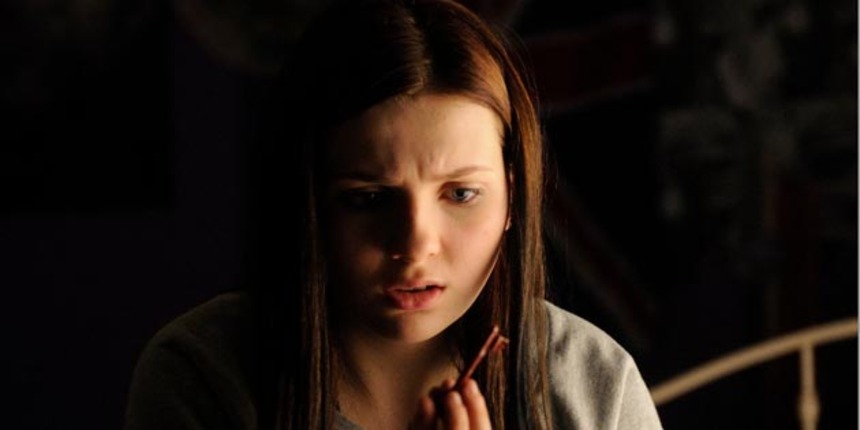 Time is a fluid thing in the atmospheric Haunter, but it's set mainly in 1985. It's the day before Lisa's 16th birthday. It has been for a while. Lisa (Abigail Breslin) and her wholesomely plain family -- mother (Michelle Nolden), father (Peter Outerbridge), and little brother Robbie (Peter DaCunha) -- seem to be in a Groundhog Day situation, reliving this same day over and over. Only Lisa realizes it, though, along with its corollary: they're all dead.

These facts are revealed early in Haunter, a good old-fashioned ghost story (with a few slight formula tweaks) from director Vincenzo Natali. His most famous films, like Cube (1997) and Splice, were far more violent and intense than this one which fits in the genre of gore-free PG-13 thrillers -- and in the even smaller subsection of gore-free PG-13 thrillers that are good.

The story, written by Brian King, unfolds entirely from Lisa's point of view as she tries to make contact with the other side, facing opposition from a mysterious, craggy-faced man (Stephen McHattie) who warns her against such attempts lest there be dire consequences. ("You are a Busy Betty!" he says menacingly. "I do not like Busy Bettys!") Lisa also strives to understand who this man is, how she and her family died, and why the repetition of this single day has suddenly broken out of its pattern.

My description makes it sound like a mixture of Groundhog Day The Others, and the first season of American Horror Story. To be honest, it starts out feeling that way, too. But the story breaks off into new directions soon enough, and avoids coming across as derivative. Lisa encounters anomalies that intrigue us as much as they do her: missing laundry from the washing machine, Robbie's imaginary friend, her father's sudden interest in cigarettes, an argument about auto parts. There is much more at stake here than simply getting her family to accept the truth about what has happened to them. There's a bigger picture.

I wish it all came together in a more cohesive and satisfying way than it does, but King's screenplay gets mired in muddy details and never fully explains the rules of its fictional supernatural world. Lisa's connections to and interactions with the house's former and current occupants are ill-defined, occurring at arbitrary times and for seemingly arbitrary reasons. The film is seldom what you'd call "scary," either; it's closer to "spooky" (which isn't a criticism, just an observation).

But 16-year-old Breslin's lead performance is strikingly good, with a convincing mix of emotions both normal (teen boredom) and abnormal (existential terror over the realization that one is dead). She's able to carry the film on her shoulders, assisted in particular by Stephen McHattie, a familiar character actor who has never seemed as intimidating as he does here.