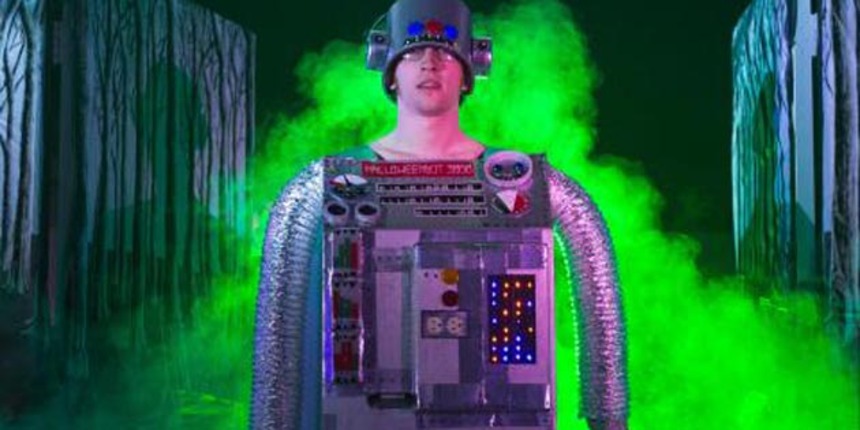 Emily Hagins has already made quite a name for herself in the Austin film scene with three full leangth features including 2011's indie hit My Sucky Teen Romance. In her fourth feature, Grow Up, Tony Phillips, Hagins shows more filmmaking maturity, leaving behind the genre-lite aspects of her past films to tell a story of fitting in and growing up. What results is a much more polished and professional feeling product that is every bit as entertaining as Hagins's past work.

Tony Vespe plays the titular Tony, a kid obsessed with Halloween, regardless of whether his fellow high school seniors think dressing up is lame. His friends Elle (Katie Folger, who looks a lot like an all grown up Sally Draper) and Craig (Devin Bonnée) are concerned about Tony's continuing ridicule and his mom just wants him to focus on his college applications. But Tony remains unfazed; committed to having the best costume in town. Things get complicated with Tony's cousin Pete (AJ Bowen) shows up in trouble, needing assistance from Tony's costume fund, even if it means using dubious methods to attain it.

If it sounds like a rather tame and obscure plot, it is. But that's just fine. In the CheesyNuggets-verse, the importance of teenage friendship dynamics is magnified to feature-film-plot-worthy dramatic proportions. It's easy to overlook that this kid would probably have to be off his rocker to be so serious about Halloween costumes because we can all remember the awkward odds that Tony's particular interest puts him at with his cooler peers. Dealing with these interactions is at the heart of the film and they are handled with the authentic tenderness of someone who truly understands the dynamics of fitting in.

There is an overwhelming wholesomeness without irony that prevails in all of Hagins's work (rumor has it she doesn't allow swearing on set). While this can be a bit disarming to audiences used to more edge, it can also evoke nostalgia for Nikelodeon's youth-oriented shows of the early 1990s like Salute Your Shorts and The Adventures of Pete and Pete for audiences of a particular age. Hagins might just do dynamite work in television if she decided to give that world a spin.

While Grow Up, Tony Phillips is CheesyNuggets through and through, it also hits a new high water mark for Hagins in terms of production value. The movie looks great and score is excellent. AJ Bowen's performance elevates the whole cast and it's easy to see how far Tony Vespe has come. On top of that, there are plenty of hilarious cameos from inside the Austin film world. All this coupled with Hagins's wonderful sense of background humor will surely make Grow Up, Tony Phillips satisfy all film fans with any hint of a sweet tooth.

More about Grow Up, Tony Phillips