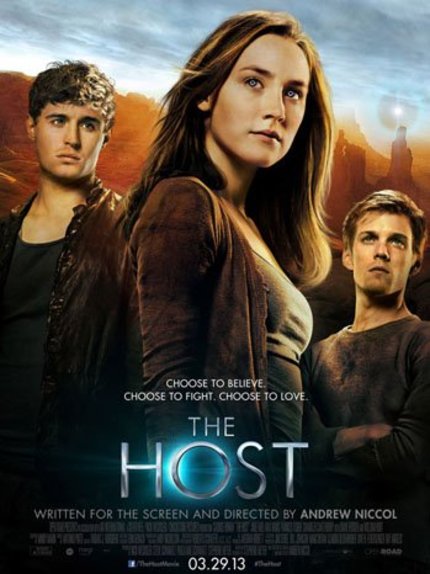 It's rare that I see a film as patently awful as The Host. I mean, sure, I've stomached the likes of Identity Thief in the last few months, but this latest "film" from the "mind" of Twilight "author" Stephenie Meyer may well go down in history as one of the worst things ever screened to an audience.

The story involves Alien squiggly bits that after an interstellar journey get implanted into the necks of the human race, resulting in glowing eyes and a fascination with chroming (i.e., covered in shiny metal) vehicles. A ragtag band of humans with a proclivity of making out during a rainstorm, yet still being chaste enough to avoid hitting to the proverbial first base, are shown in a kind of existential battle. Hiding out in a dormant volcano, we see them going on daring missions, stealing supplies from what to any Canadian looks like a No-Frills that mated with an IKEA.

No, wait, before that bit there was a Wander who wanders through the desert in the most tedious runaway that may ever have been filmed. Oh, and there's this part where we realize that our heroine has held on to the former memories of her, um, host, and the two of them have conversations that lack the dramatic sophistication of Lily Tomlin and Steve Martin in All Of Me.

While somehow I've managed to avoid each episode of the Sparkly vampire series, I was assured by my companion at the screening that the so-called plot of The Host bordered on the plagiaristic, as storyline after storyline echoed Meyer's other series. There are repulsively awkward love triangles (taking sloppy seconds to a new, banal level), and makeout after makeout session that serves, I guess, to titillate those prepubescents the film is presumably aimed at.

Sure, we get our fair share of films targeted at 12 year old boys, so that targeting pre-teen girls seems fair game. Yet what's truly awful is just how idiotic the whole proceedings are. Literally every element grew to annoy, from the preposterous heeled shoes worn traipsing through the desert, the weird "mom-jeans" style white pants-with-thong-showing worn by the "Seeker," the guess-it-ahead-of-time script moments ("Wanda!"), and so on.

There was a brief moment that I thought they'd do something interesting. Yes, the ending was telegraphed from about 20 minutes in, but (spoiler, if you care), I actually thought, hey, that's almost cool, implant the host into the willing dude, and have them literally become one. That's how Star Trek or X-Files might have handled it, at any rate. But, now, we conveniently get another meat-bag showing up as a valid vessel, so that everyone gets their own cathartic relationship to live happily ever after.

Frankly, The Host is just boring to write about; it's a romance novel mixed with the trappings of Gene Roddenberry's worst tendencies for saccharine storytelling. The dreary cast makes it difficult to tell the 20-something chiseled boys from one another, and the likes of William Hurt makes one feel kind of sad that this is what he's ended up doing. There are some that will praise Saoirse Ronan in this, but if she doesn't jump to the top of the Razzies list with this potentially career-ending turn, then we're in for a pretty dreary year indeed.

Somebody may someday make a sarcastic musical about this film, while some young viewers might find it a gateway to slightly more sophisticated fare. Yet on its surface, leaving the screening of The Host made me kind of dread cinema. So powerful was its anti-film funk that it managed to obliterate, if briefly, my feelings about what's been actually a pretty good week of film watching.

The biggest tragedy (maybe) is that the film's title will forever sully the enjoyable other Host film, the 2006 monster film from Bong Joon-Ho. When it screened at TIFF 2006 I found some things to criticize about Bong's film, but it's a goddamn masterpiece compared to this year's film that shares the same title.

2013's The Host is eye gouging, can't-get-the-hours-back-of-your-life kind of bad that if there's any justice will quickly disappear from your local screen, soon to be forgotten save for those masochistic few who actually stomach the entire running time.