Review: ADMISSION Allows Entry to An Agreeable, If Shallow, Experience 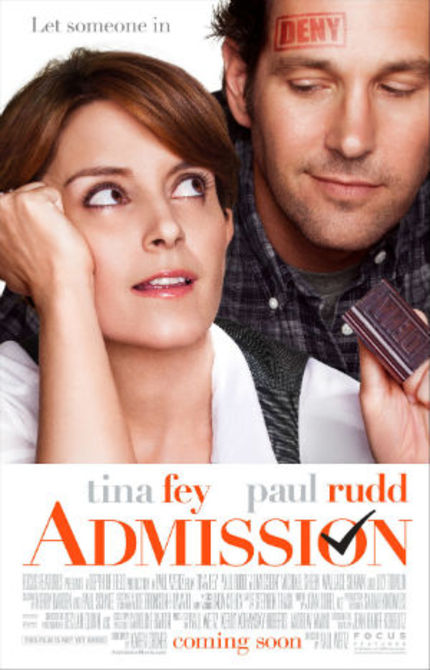 The latest film from director Paul Weitz sits comfortably alongside his earlier comic and ultimately melodramatic explorations of 30-something adult anxieties about parenthood, mid-career crises, and personal growth. As he himself grows older, though, Weitz's indulgence in soapy sentimentality is increasing.

Weitz does not receive credit for the screenplay -- that goes entirely to Karen Croner, based on a 2009 novel by Jean Hanff Korelitz -- but it's easy to imagine why the material appealed to him. Portia Nathan (Tina Fey), like the central characters in About a Boy (2002) and In Good Company (2004), is settled into a comfortable routine that is about to be shaken to its core.

In her professional life, Portia has risen to a high position within the admissions office at Princeton University after 16 years of service; she's under consideration to take over after her boss (Wallace Shawn) retires. Her only competition is fellow worker Corinne (Gloria Reuben); the two women appear to be two sides of the same coin, both sticklers for upholding the strict admissions policies of an Ivy League school where only 1% of the applicants will gain entry. In her personal life, Portia has been living with fellow academic Mark (Michael Sheen) for a decade, a relationship that has settled into a prematurely middle-aged rut.

On her annual trip to promote Princeton and recruit potential applicants, Portia visits a new developmental high school, run by John Pressman (Paul Rudd), a friendly sort who wants to make sure Portia meets Jeremiah Balakian (Nat Wolff), the only senior at the alternative school who actually wants to go to Princeton. Portia immediately sizes up Jeremiah as not measuring up to the ideal applicant profile ... until John tells her that Jeremiah may be the son she gave up for adoption.

Weitz and his colloborators quickly establish a pleasant, easygoing rhythm for the narrative, allowing space for Fey and Rudd to add their particular comic riffs -- Fey's verbal mannerisms and willingness to muss up her appearance, Rudd's facial mugging and snappy comebacks -- while steadily moving things in a more dramatic direction. 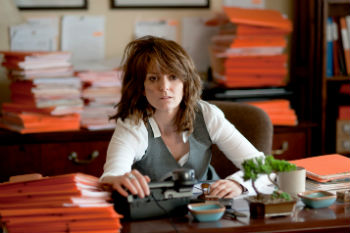 There are stops along the way for Portia and her estranged mother (Lily Tomlin, in a top-notch performance) to express their frustrations with each other, while John's itinerant charitable lifestyle is questioned by his adopted Ugandan son Nelson (Travaris Spears), and Portia's indecisive unhappiness is unintentionally mocked by sightings of Mark, who has broken up with her in order to continue a relationship with his pregnant lover (Sonya Walger).

In sum, a lot of interesting threads are thrown into the air, but none are pursued with particular vigor except for Portia's increasing willingness to bend the rules in behalf of Jeremiah. The characters are insufficiently developed, to the point that it's impossible to see their actions as anything other than window dressing to Portia's long-delayed coming-of-age story.

For example: (1) We never quite understand why Mark cheated on Portia; boredom is the only suggestion. (2) John makes a point of telling Portia that they both attended Dartmouth University, but their varying post-collegiate career paths are not compared or contrasted at length; instead, it seems more like a plot device. (3) Portia and Corinne are pitted against one another, but until Portia gets mushy, it's hard to discern how they differ; perhaps that's the point?

Weitz came to attention with his directorial debut, American Pie (1999), which also introduced a cast of likable characters who begged for deeper examination; since then, Weitz has caroomed from dramatic comedies to a failed YA adventure (Cirque du Freak: The Vampire's Assistant) to a mainstream comedy (Little Fockers) and back again to a smaller-scaled, less successful character study (Being Flynn).

Weitz has injected each of the films he's directed with distinctive visual storytelling touches; in Admission, as Portia reviews each college application, she imagines the applicant standing in front of her, making a case and/or personal plea. It's a clever adaptation from the original novel, where quotations from applicants' essays were used, and works well to personalize what appears to be an overwhelming process. That same visual inventiveness doesn't carry over to the bulk of the narrative, however.

For all that his interests may be wide and varied, Weitz is painting himself into a corner as a jack of all trades but a master of none. Admission remains shallow when it needs to go deep, passive aggressive when it needs to be direct. There's nothing particularly wrong with the movie, as is; it's an eminently agreeable movie to experience, and sustains the impression of Tina Fey as an eminently likable personality who is capable of flaring up into dramatic territory as needed.

Yet, without making the deeper impact that the story (and characters) deserve in order to resonate, Admission fades quickly, its surface charms only faintly memorable after the closing credits scroll off the screen.