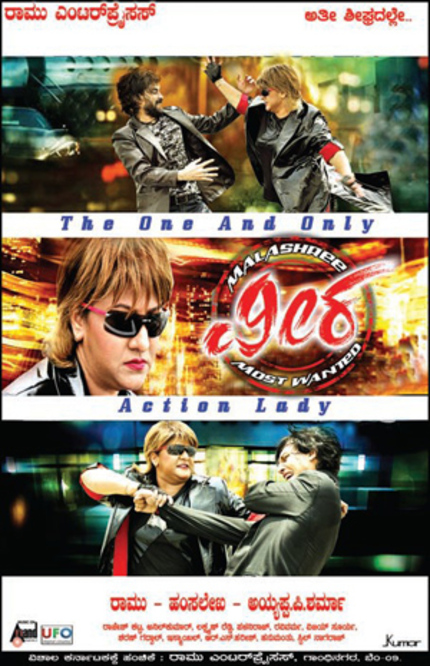 Looking outward from a culture obsessed with thin women, it's very refreshing to see a star like Sandalwood's Action Lady Malashri kicking ass and taking names, all while looking kind of like a school bus driver. I have no context for Veera, apart from the trailer. This is the only info I could find on the film from a Malashri facebook fan page:

Malashree popularly known as 'Action Queen' is back with a new film called Veera . This is not a new film, but a film which was started almost three years ago and lying in the cans. Now producer Ramu, Malashree's husband, is planning to release the film soon.

Veera is a typical Malashree kind of film, where she fights the villains in grand style. To add more colour to the film, well-known actors who are famous for their negative roles like Rahul Dev, Mukul Dev, Ashish Vidyarthi, and C R Simha have been roped in. The film has some breathtaking action sequences by Palaniraj and Raviverma and most of the action sequences have been shot in the exotic locations of Bangkok and Hong Kong.

Saikumar and Ravishankar's brother Ayyappa P Sharma, who directed Malashree in Durgi earlier, has directed this film apartfrom writing the story and screenplay. Hamsalekha has composed the music for the film. The film is in the post production stage and is likely to release some time in December.

My chances of seeing this in a cinema are pretty much nil, however, I'll do my best. Check out the trailer for Veera below.