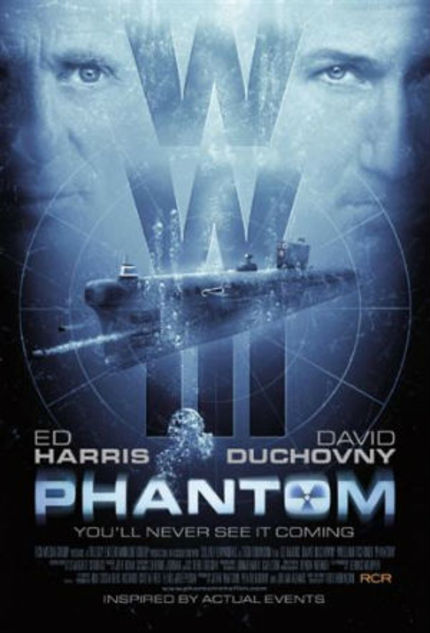 Dive! Dive! Treading familiar water with aplomb, the modest submarine thriller Phantom is buoyed by two superior performances from Ed Harris and William Fichtner, who add salt and crust to what is otherwise a relic of the Cold War.

"Inspired by actual events," according to an opening title, Phantom is set almost entirely on board a creaky Soviet diesel submarine in 1968. Writer/director Todd Robinson appers to have worked backward from the ending, conjuring up a scenario in which a nuclear crisis develops between the U.S. and the Soviet Union because of top-secret equipment the KGB is testing.

Harris plays Demi, who is ready to accept an ignoble retirement when his superior officer, Markov (Lance Henriksen), offers him the opportunity to captain the secret mission. Though exhausted from a long tour of duty, his crew obediently reports for service as well, led by Executive Officer Alex (William Fichtner) and Political Officer (Johnathon Schaech). The KGB technicians are led by the clean-shaven Bruni (David Duchovny). Once the mission is revealed, however, and the KGB technicians appear to be pushing conditions toward an apocalyptic showdown, questions arise as to the veracity of the orders, setting up a tense and extended stand-off in the tiny confines of the claustrophic ship.

With that set-up, Phantom immediately calls to mind similar thrillers such as John McTiernan's The Hunt for Red October, Tony Scott's Crimson Tide, and Kathryn Bigelow's K-19: The Widowmaker. In such exalted company, Phantom suffers by comparison. For one thing, Phantom is a much lower-budgeted production. For another, more important point, the archetypes of the sub-genre are as rigid and narrow as the interior of a submarine, and require crackling tension or brazen inventiveness to succeed or surprise.

Phantom is more of a 1960s-style melodrama; it's good for what it is, and I certainly enjoyed the tense atmosphere and earnest conflicts between ideals, yet at the same time it feels slight; the importance of the "actual events" is undermined by historical reality, since we know the inevitable outcome (i.e. the world was not destroyed in 1968). The dialogue gets the job done without exceptional snap. 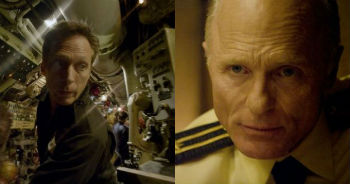 Harris and Fichtner succeed admirably in bringing humanity to their characters. Harris, as Demi, is a strong, authoritative leader, yet he's haunted by his past failures and well aware of his limitations. Fichtner is his loyal #2, supportive even as he is plain-spoken to his friend and superior. Harris and Fichtner are capable of doing more with less than most other actors, and they bring to bear all their subtle powers to their roles, from the inflections in their dialogue to the facial expressions they silently exchange.

Most of the other performances are very solid, led by Jason Beghe (always a welcome, steady presence), and supported ably by Sean Patrick Flanery, Kip Pardue, and Jason Gray-Stanford. Two other key roles come across as muddled; Schaech's loyalties are supposed to be torn, but it's difficult to tell, since his reactions are so muted; what, exactly, does he stand for? Likewise, Duchovny underplays his antagonistic character, to the point of ineffectiveness.

Sharp-eyed readers may wonder: Do the actors speak in Russian, or with Russian accents? Amusingly, Robinson dispenses with this common dilemma by ignoring it. Though the actors are playing Russian characters, everyone speaks good old-fashioned American English. It's a bit confusing until the submarine sets sail and the characters begin to assert their individuality, but it's consistent with other decisions made in the film, such as the subdued production design and the absence of slang or silly banter. (In the film's press notes, Robinson says that he wanted the audience "to forget that these are Soviet soldiers and simply see them as human beings under pressure.")

Phantom takes itself seriously -- perhaps too seriously -- but it remains true to its mission, delivering an effective chamber drama beneath the waves of a troubled world.

The film opens in wide release throughout the U.S. on Friday, March 1, 2013. Check local listings for theaters and showtimes.

Do you feel this content is inappropriate or infringes upon your rights? Click here to report it, or see our DMCA policy.
David DuchovnyEd HarrisTodd RobinsonWilliam Fichtner