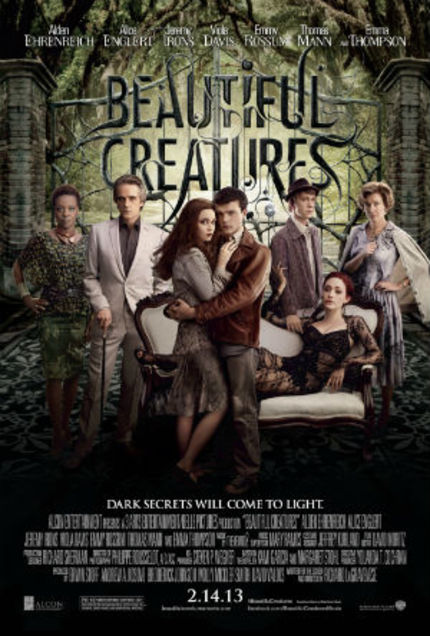 There's a lengthy, dragging middle section of the supernatural teen romance Beautiful Creatures that threatens to sink the whole enterprise. Tellingly, it's when the nuts and bolts of the plot kick in: as the witch's pivotal 16th birthday approaches, good and evil forces conspire to influence her, her non-witch boyfriend is put at risk, ancient feuds come to a head, yada yada. It comes from the young-adult series of novels by Kami Garcia and Margaret Stohl, but it might as well come from any of the other young-adult novels with supernatural elements that have proliferated since the advent of a certain one that rhymes with "Shmilight."

When the mythology isn't the focus, though, the movie version of Beautiful Creatures is surprisingly peppy and charming -- not transcendent of its narrowly defined genre, but a worthwhile entry in it, and not a bad film all around. We have the leads to thank for much of that: Alice Englert as Lena Duchannes, the broodingly charismatic girl who's rumored to have dark powers; and Alden Ehrenreich as Ethan Wate, the friendly, ordinary boy who's prone to giggling even though he's supposed to be sad about his mother's death. Unlike many cinematic teen relationships, Lena and Ethan's has a natural, good-natured energy to it. They like each other, and we like them.

The setting is Gatlin, South Carolina, a small town with a high concentration of intolerant bumpkins. Ethan, a high school junior, can't wait to escape its confines. His unseen father is depressed since losing his wife, and Ethan is cared for by the housekeeper, Amma (Viola Davis), one of Gatlin's few open-minded individuals. His best friend, Link (Thomas Mann), is the embarrassed son of the town's most vocal fundamentalist Christian and book-banner (Emma Thompson). Everyone whispers about the new girl, Lena, who has come to stay with her uncle at the family's secluded manor. The family is said to be full of satanists. Intriguing!

Lena's uncle, the deliciously named Macon Ravenwood, is a reclusive Southern gentleman of impeccable manners, played with glee by Jeremy Irons. His duty, we come to understand, is to protect Lena from dark forces, many of whom are related to her. Lena will soon become either a good witch or a bad witch, you see -- they're a family of "casters," not satanists -- and there is some question of whether the choice is hers, in the hands of fate, or dependent upon breaking an old curse. Her sexpot cousin, Ridley (Emmy Rossum), roars into town in a convertible and uses her powers to beguile local men into doing her bidding, all in the name of bringing Lena to the dark side. A mysterious and fearsome woman named Serafine is also lurking about.

The supporting characters are colorful, from Ravenwood kinfolk Margo Martindale and Eileen Atkins, to the pious mean girls at school (Zoey Deutch and Tiffany Boone), to the teacher (Pruitt Taylor Vince) who has an eyepatch for no given reason. The movie's magic-tinged Southern gothic atmosphere is appealing, and though the parodies of small-minded religionists can be a little on-the-nose, there's more spunky humor than we're used to seeing in movies about tortured teen romances. In fact, calling it a "teen romance" might be doing it a disservice, since the term conjures images of soggy, morose melodramas aimed only at adolescent girls. This is no Nicholas Sparks nonsense here.

Written and directed by Richard LaGravenese, who penned the adaptations of The Bridges of Madison County and The Horse Whisperer, Beautiful Creatures is undoubtedly meant to appeal mostly to young women, but it doesn't pander to them or alienate potential male viewers either. The scenario may parallel the one in Twilight (albeit with genders reversed), but Ethan and Lena could hardly be more different from Bella and Edward. For one thing, they laugh a lot.