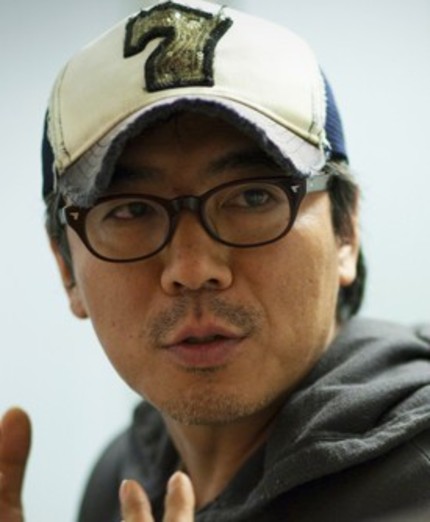 Kim Jee-woon recently signed his Hollywood debut with the Arnold Schwarzenegger vehicle The Last Stand and his next feature project will be a live-action adaptation of the anime Jin Roh: The Wolf Brigade, but it looks like we'll be getting another new work from him very soon. Following his work on the omnibus Doomsday Book, Kim is returning to the short film format with Hide & Seek, a new experimental short commissioned by CGV, Korea's largest exhibitor.
Starring Gang Dong-won (Duelist, Haunters) and Shin Mina (A Bittersweet Life), Hide & Seek involves a character known as X who becomes involved in a chase as he seeks to deliver an unknown object.
Previously responsible for 4DX technology (I'm not a fan), CGV is hoping to demonstrate the value of a new screening method they've developed. Known as ScreenX, this multi-projection technology seeks to project a wider image, beyond the traditional rectangular white screen. It remains to be seen how this will differ from bygone panoramic screens or dome screens but considering Korea's status as a technology innovator and Kim's involvement, I'm definitely curious to check it out.
Tweet Post Submit

Do you feel this content is inappropriate or infringes upon your rights? Click here to report it, or see our DMCA policy.
cgvgang dong-wonhide & seekkim jee-woonkoreakorean cinemashin mina