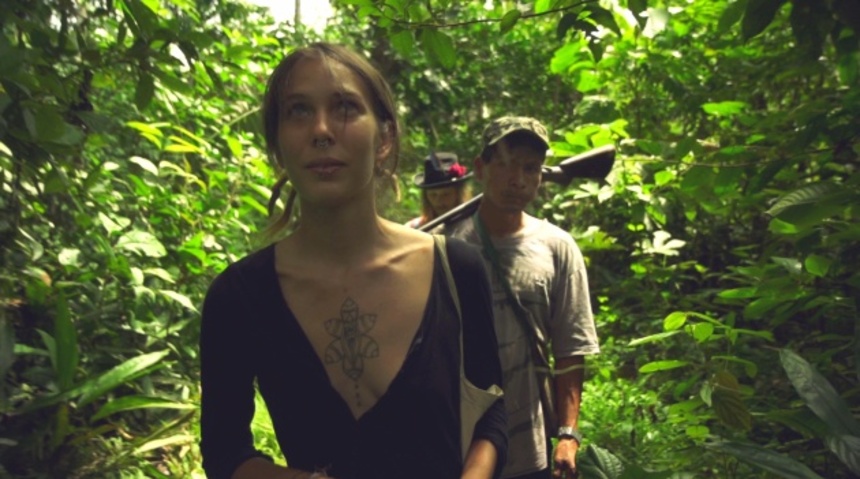 (It's a documentary about f*cking hippies... No, I'm not being reactionary! They're really hippies and they're really f*cking!)

This year there were several feature documentaries at the International Film Festival Rotterdam, but few had a subject (or a title) as eye-catching as F*ck For Forest. This Polish documentary follows the exploits of a group of hippies in Berlin, who have a website where you can watch them be naked or even have sex with each other. Not for free though, unless you're a contributor: it's a pay-site and the money spent by viewers is collected to save the South American rain forests.

I'll skip my regular story-versus-movie breakdown, as it does not really serve a purpose when describing a documentary like this. What happens IS the story and the movie. Director Michal Marczak took a camera and followed several members of the charity for a few months. Through his edited recordings we get to know some of the founding figures, and also a very extroverted newcomer. Of course the subject matter itself guarantees that you get to see a fair bit of nudity, both of the pleasing and the gross variety, but Marczak never veers into exploitation and keeps most of the sexual proceedings off-camera.

Instead, his focus lies elsewhere: by showing how these people work as a group, F*ck For Forest provides a rare insight into a subculture which I thought was more-or-less extinct. The characters on display here are all interesting, to say the least. While some of them actually have enough brains and social skills to engage in a decent debate, others are insufferable prats who you'd want to punch in the mouth within minutes of hearing them speak. One of these is shown having a verbal fight with his non-hippie sister, who accuses him of being very judgmental of all others while he constantly asks everyone for tolerance towards him. In that one sentence she totally nails it, but he's far too pretentious and full of himself to even conceive of what she's talking about. Later you also see the same guy throw a tantrum, because, for once, he isn't in the center of everyone's attention. 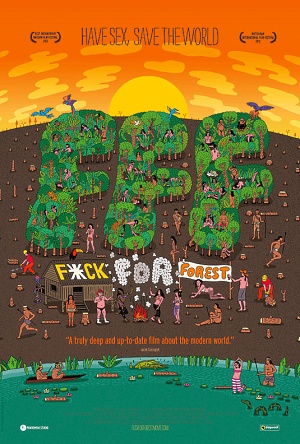 But the film is not just about weirdo-watching. The charity itself is also shown to be very successful, easily raising well over 400,000 Euro in a fairly short time. F*ck For Forest then follows the key members of the group as they travel to Peru to try and help the local Indian tribes to buy and conserve rain forest. It is here that the film becomes pretty bizarre, almost resembling a found-footage narrative. You expect these guys to be stopped at the border and disappear into a jail somewhere.

Or to get lost in the jungle.
Or to be bitten by poisonous insects.
Or to get eaten alive by cannibals.

None of that happens though. You see the group members successfully reach their destination and become enthralled by the locals and their knowledge of the plants and herbs.
So, do they manage to save the forest? I won't spoil the end result, but rest assured the hippies are in for a reality check of epic proportions.
This story and some very amusing asides keep F*ck For Forest interesting. It's a good thing too, because the film suffers from a certain shallowness, and it never quite gets underneath all the standard environmental rhetoric. Still, it contains quite a few moments that will make you think "What the F*CK?"...

By the way, my constant use of the asterisk is not out of prudence: here at ScreenAnarchy we dare say fuck when we want to. It just happens to be an intrinsic part of the title and if you don't believe me just look at the poster.

If you want to have a good laugh at the expense of some vague weirdos, F*ck For Forest will allow you to do so. If you want to see hippies get nude, there is some of that as well. But there is also plenty of genuine commitment and heart here, and an interesting story as well.
The film itself is intriguing rather than excellent, but definitely worth a look.

And the Rotterdam audience thought so as well, awarding F*ck For Forest a 3.7 out of 5.

More about Fuck for Forest