Fox Says It's A GOOD DAY TO [BLEEP] HARD In UK 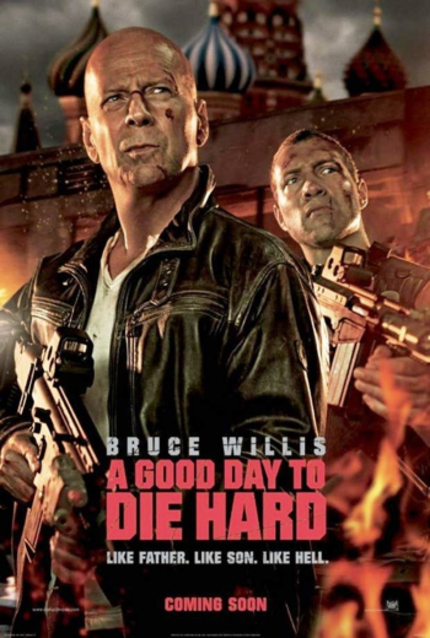 Fans in the U.S. were delighted to hear that A Good Day to Die Hard had received an "R" rating, taking it as an article of faith that the fifth installment in the franchise would not be softening the trademark explicit violence and obscenities in hopes of gaining a larger audience, a route followed by the largely disappointing Live Free or Die Hard.

In the UK, however, Fox decided on a different path, resulting in a 12A certificate from the BBFC. Why the changes? According to people who protested directly to Fox, the company feels this will "delight" fans in the UK:


We can confirm that working with the BBFC some minor cuts were made in order to achieve a 12A certificate. We believe the movie will delight the Die Hard fans and the 12A certificate, similar to Dark Knight Rises and Skyfall, will allow both adults and teenagers to enjoy the latest movie in the franchise.

The quote above came from responses via email to at least two people, who shared the emails with Bleeding Cool. Reportedly, the original version was headed toward a 15 certificate.

Will it make any difference at the box office? Advance word, as evidenced by James Marsh's review at Twitch, as well as veiled hints on my Twitter feed last night (when the film screened for most critics in the U.S.), suggest that the enthusiasm will not be rewarded. That will not keep fans away, though, in part because it's the best choice for young men who are not dragged by their dates to see Safe Haven or Beautiful Creatures, which may be fine films on their own merits -- and entirely appropriate for Valentine's Day -- but do not hit the target demographic of A Good Day to Die Hard.

We'll see if Bruce Willis and Jai Courtney can brings fathers and their teenage sons together when the film opens tomorrow.

Do you feel this content is inappropriate or infringes upon your rights? Click here to report it, or see our DMCA policy.
Bruce WillisDie HardJai Courtney