Sundance 2013 Review: STOKER Is A Triumph Of Beauty And Violence 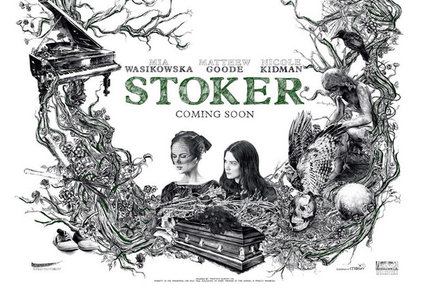 Around these parts, a new Park Chan-wook film is an event to be highly anticipated. So I was quite excited to have the chance to see the maestro's latest film, Stoker, his first in English to boot, at Sundance last weekend. His uber-violent Vengeance trilogy, and political thriller JSA: Joint Security Area, are undisputed classics, though some would say (including me) the director later had a couple of minor missteps with I'm A Cyborg, But That's OK, and his vampire film, Thirst.

So while Stoker was indeed at the tip-top of my "must see" list for Sundance, I didn't allow myself to turn cartwheels before I had a chance to lay my eyes on the film in its entirety.

Stoker is what you've come to expect from Park's work: A twisted tale of familial obsession, sexual repression, buried histories, and, in the loosest and grimmest sense, self-liberation.

A modern Gothic, Stoker begins with the aftermath of the death of Richard Stoker (played in flashbacks by Dermot Mulroney), a monied man with a family estate, a beautiful wife named Evie (Nicole Kidman), and a daughter named India (Mia Wasikowska), with whom he shares a particularly close relationship. India is an eccentric loner of a young girl, on the verge of womanhood, when her father dies in a questionable car crash. This drives India deep within herself, and she creates a mental cocoon of self-counseling, and a constantly running interior monologue. Preferring to keep her own company on the family estate, she has no clique of friends, and is singled out as something of a morbid curiosity at school by her peers, targeted by bullying jocks.
During her father's wake, Uncle Charlie (Matthew Goode), who she had no prior knowledge of, shows up at the sprawling Stoker home, announcing he's decided to stay awhile under the pretense of helping out and getting the immediate family members through their grief. Before long, Uncle Charlie and mother Evie develop an uncomfortably intimate relationship, sharing whispers and fleeting touches, which India spies from behind lace curtains, or through darkened panes of glass.
As other family members pass through, for brief visits and to pay their respects, it's obvious there is something more to Uncle Charlie than a caring benevolence and altruistic desire to help his family. When Aunt Gwendolyn, an older matriarchal presence in the Stoker clan, finds Charlie there, we feel an electric tension, as the distraught unit attempts to cope with their loss, as well as welcome the mysterious, long lost uncle back into the fold.
Soon Charlie is focusing his attention on the lonely and perturbed India, trying to win her favor and gain her trust. Suspicious, India at first ignores the advances made at closeness, but when she decides to meet up with a boy who has been defending her at school, and the situation goes sour, Uncle Charlie shows up in the nick of time. Through a display of being protective in the extreme, he seems to finally hammer a crack in India's stand-offish attitude. Let the psychodrama begin!

Now let's remember, this is a Park Chan-wook film, and things eventually go off the rails in a huge way. Maybe India shares a lot more in common with this long-lost relative than originally anticipated. Issues of family loyalty, romantic/sexual misconduct, and hereditary insanity are the main underpinnings in Stoker. Nicole Kidman is at her icy best as the widowed wife, who may or may not be a villainess, trapped with her grief in the gigantic manor of a house, trying to assert motherly influence and control over her distant daughter. Mia Wasikowska is layered, and simultaneously sympathetic and creepily suspect, as the dour India. Her performance never digresses into something overtly "emo" or cartoonish in the semi-morbid overtones of her character's personality.
The real revelation for me was Matthew Goode. His sly smile, undeniable charisma, and note perfect control of timbre in playing Uncle Charlie close to the chest was the film's masterstroke. A scene in which he and Wasikowska perform a piano duet that becomes heated to the point of being downright erotic could have been laughable, had it not been played by two such solid actors.
Stoker is a difficult film to wrap up in a synopsis, if only for the fact that I don't want to give away any of the twists, some of which even had an old hand like me going, "Whoa...wait a minute...", but Stoker sure as hell isn't a difficult film to recommend.

All the visual flair and giddy, saturated colors inherent in Park's films are on display here, from the warm greens and browns of the Stoker family grounds, lovingly massaged by the camera, to the privileged and manicured cleanliness of the immaculate Stoker home, in which we the viewer always remain somehow "outside." A beautiful structure, as cold and heartless as the people within, is a physical reflection of the disenfranchised and cloistered, desperately grasping at the illusion of healthy normalcy, while the impossible-to-contain terrors of their dark family history threaten to erupt in an explosion of bloody truth and violence; a tragic inevitability.

As far as this being Park's first English-language film, I read that the director actually spoke not a single word of English on set, and worked completely through a translator with his cast and much of his crew. This is an amazing feat in itself, given that the screen talent are all 100% spot on and the flow of Stoker itself makes it my favorite film in Park's filmography since Sympathy For Lady Vengeance, faring far better than many of the hot shot Asian filmmakers who have crossed over into American cinema (cough John Woo cough). I'd compare him to someone like Darren Aronofsky, or maybe David Fincher, to try and contextualize the tone for someone not already familiar. Then I'd point them straight at Oldboy and tell them to strap in.

Stoker is absolutely a successful crossover for Park Chan-wook into English-language cinema, and is also a triumph of style as well as casting. Nicole Kidman once again proves she's an incredibly powerful screen presence (To Die For, anyone?), Matthew Goode, again was a surprise and a revelation to me, and it doesn't take a Magic 8-Ball to know that Mia Wasikowski is here to stay. Whodathunk the young girl from the way-better-than-it-should-have-been zombie short I Love Sarah Jane would emerge so quickly, ready for bona-fide A-class stardom (and deservedly so). Hell, I even went back to re-evaluate Tim Burton's Alice In Wonderland due to her being the star. (Sadly, it didn't make it any better. As Doris Day sang, "Que sera, sera.")

But, yes, Stoker is an accomplishment. Start getting excited for an incredibly fun, yet perverse and, more importantly, powerful piece of work that awaits you come March 1, when this artful slice of insanity is unleashed upon screens worldwide.

It's safe to start doing cartwheels now.
(P.S. Also, a "hell yeah!" shout out to ScreenAnarchy's Festivals Editor Ryland Aldrich, as well as Charlie and Sara at the Rose Wagner Center in Salt Lake City for making darned sure I didn't miss this one due to the high demand for seats and confusion in tickets. A "Hell no!" shout out to the Sundance attendee who seemed to come from even more privilege than the characters on-screen, who insisted on chuckling through every delicately brutal moment of Stoker. I only wish India and her trusty No. 2 pencil were around to handle the situation. See the trailer below and you'll know what I mean!)

Do you feel this content is inappropriate or infringes upon your rights? Click here to report it, or see our DMCA policy.
Chan-wook ParkDermot MulroneyMatthew GoodeMia WasikowskaNicole KidmanStokerWentworth MillerDavid AlfordDramaThriller