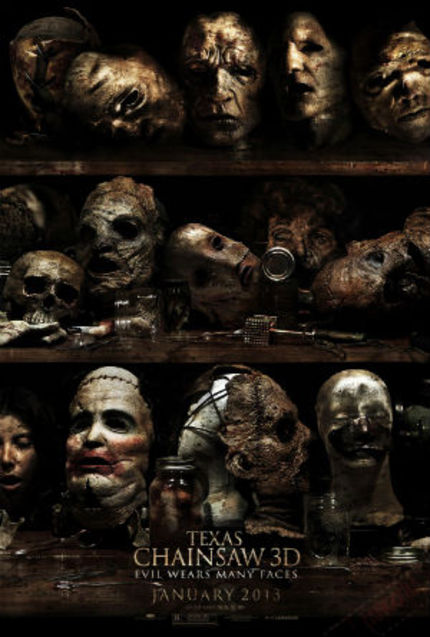 John Lussenhop's Texas Chainsaw 3D opens with what are undeniably its best moments: the film's title credits, juxtaposed over a highlight reel of Tobe Hooper's 1974 original, stunningly post-converted into phenomenal 3D. Nearly 40 years later, Daniel Pearl's gritty photography has never looked so gorgeous, and seeing Marilyn Burns pop off the big screen as a now three-dimensional Gunnar Hansen pursues her through the night is a genuine joy. The footage, even in snippet form, still packs a wallop that's primal, fierce, and unequaled.

Aggressively marketing itself as a "direct sequel" to the original masterpiece (and apparently forgetting Hooper made his own "direct sequel" back in '86), Texas Chainsaw picks up minutes after the original wraps up, with a bummed-out Leatherface (newcomer Dan Yeager) returning to the Sawyer homestead. Ignoring that his home is now peppered with a dozen new characters who were clearly not in the original film, he's momentarily chided by patriarch Drayton (a scene-chewing Bill Moseley, taking over for the late Jim Siedow) before Sheriff Hooper (ugh) and a group of local bumpkins arrive, delivering mob justice and seemingly eradicating the vile Sawyer clan forever.

As they leave the ghoulish homestead in ashes, the trigger-happy mob fail to realize a young mother and her infant daughter have somehow escaped the firefight and subsequent blaze. When a childless yokel spots the dying woman, he and his wife quietly snatch up the baby and whisk her off to Middle American white trash anonymity.

Hit the heavy metal music, fast-forward 40 years, and conveniently toss that "direct sequel" nonsense out the nearest window. We're five minutes in and any lingering "direct" connection to the original film is LONG gone.

The Sawyer baby, despite having been born four decades earlier, has inexplicably grown into the 26-year-old Heather Miller (Alexandra Daddario), a sexy butcher at a supermarket that seemingly only employs Victoria's Secret models. When she receives word that her last blood relative has passed away - despite the fact that no records of her birth or subsequent kidnapping seem to exist - Heather and her friends decide to road trip it down to Texas and collect her inheritance, which just so happens to be an enormous, labyrinthine mansion.

Cue our old pal Leatherface, who also survived the fire and has been secretly living in the manor's basement these past 40 years. For those using real-world math, this should put our sprinting, leaping, and slashing antagonist at nearly 70.

From here on out, Texas Chainsaw slips right into a typical non-remake remake formula, unabashedly mimicking every Platinum Dunes "re-imagining" of the past decade. Following the recipe, its not long before we see some skin (but not too much!) and the blood starts flowing (but not too much!). Bodies end up on meathooks, tenderizing hammers meet skulls, and, in one of the film's only inspired kills, a completely incapacitated victim is slowly and deliberately bisected at the waist via chainsaw.

At the one hour-mark, Leatherface chases our bloodsoaked, screaming heroine through a county fair, ignoring everyone else there, but giving him the opportunity to stare down a kid wearing a Saw Pigface mask. Score one for terribly-executed and seemingly outdated product placement, Lionsgate.

But there in the fairgrounds, as the chase reaches it anti-climax (complete with CGI chainsaw being thrown at the camera), something wholly unexpected happens: Texas Chainsaw completely changes focus and story structure, creating an odd b-story third act that asks us to take pity on the murderous, cannibalistic Sawyer family, whose demise in '73 is - according to new information presented to our heroine - a gross miscarriage of justice.

Which totally works... as long as one conveniently ignores the fact that the Sawyers were cannibalistic sociopaths.

Abruptly transformed into a revenge film, the picture chugs along for another 20 minutes before arriving at its agonizingly predictable outcome, tying up a handful of its loose ends and readying the world for another chapter in this mistreated franchise.

That stated, the biggest problem with Texas Chainsaw is not that it's a poorly-made film, but that it has no idea what it is, or what it's paying tribute to. The acting is passable, the direction works, and the film's 3D cinematography is - at times - very impressive. If it were simply a tepid sequel, like 1994's atrocious Texas Chainsaw Massacre: The Next Generation, it might actually be more forgivable. As is, it fails in a number of desperate attempts to be a period piece (for all of five minutes), a sexy slasher film, a revenge thriller, and - in one of the movie's most head-slapping moments - a found footage film, seemingly unaware that what made the original such a powerhouse was its brute intensity and psychological anguish.

Blink-and-you-miss-them cameos from the original's John Duggan, Gunnar Hansen, and Marilyn Burns feel like wasted opportunities, but genre mainstay Richard Riehle owns every second of his screentime and Thom Barry's powerless Sheriff Hooper is a wonderfully fun addition to the film's supporting cast.

For those in dire need of seeing hot kids get sliced to ribbons, Texas Chainsaw's
meandering storyline will just barely make do - but for fans of Hooper's original who expect a legitimate, straight-faced follow-up, this painfully misguided entry will do nothing but disappoint.

To nail home just how off the mark this passionless project really is, the descision was made to include an after-credits scene featuring Leatherface played for a campy laugh. How original producer Kim Henkel willingly allowed Hooper's hulking beast to become a tired punchline is beyond reproach for any fan of the original.

Forget the saw. Give this massacre the axe.

Texas Chainsaw opens wide across North America on Friday, January 4, in both 2D and 3D versions. You have been warned