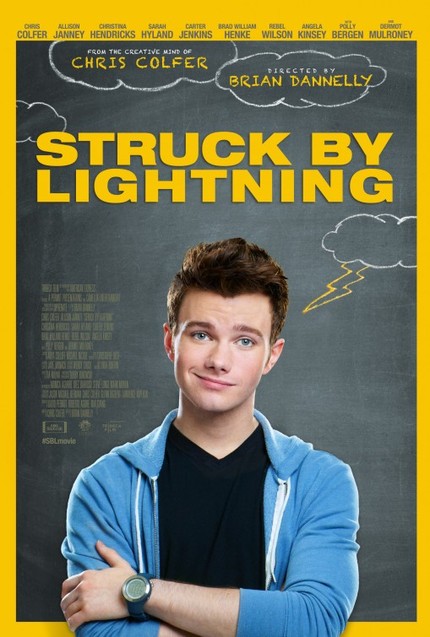 For a lot of people, high school was never fun - the bullies, the pimples, and the god awful cafeteria food. For Carson Phillips (Glee's Chris Colfer, who also wrote the film), high school became the death of him.
His dad (Dermot Mulroney) left his mom Sheryl (Allison Janney) for a younger, more attractive woman (Christina Hendricks), which turns Sheryl into a vortex of insanity. His delirious live-at-home grandma yells at him for being a stranger, and everyone at school hates him for his overachieving, pretentious ways. To literally add the final nail to the coffin, he gets struck and killed by lightning when we first meet him. (And you thought you had it bad.)
With Carson voicing over, he recaps his childhood up to his senior year of high school, where we learn his intelligence was far beyond everyone else's as a boy and that turned him into the shameless prick he is today, verbally stomping on anyone getting in the way of his goals: graduating from high school, getting the hell out of Clover (the small town he lives in), attending Northwestern University, and then living the rest of his life as the top editor of The New Yorker. He believes that in order to get into Northwestern, he needs to impress the admissions board by creating a literary magazine. In order to make the magazine a reality, Carson needs the help of all the popular kids who loathe his existence. So, Carson and his accomplice Malerie (Pitch Perfect's Rebel Wilson) blackmail the popular kids to get them to contribute to the magazine. If they don't, there will be blood. Actually, no blood, they'll just tell the whole school their dirty little secrets.
The joke about Carson's much hated existence is heavily noted when we learn it took three days for someone to discover his very dead body in the school parking lot. At his funeral, the church's billboard reads "Lightning Boy's Funeral at 2," followed by "Bingo at 4." They didn't expect a big turnout, naturally. Colfer was a good choice as Carson - he brings out the aggressiveness of a boy who's determined to hit his goals and OK with being hated for it. Colfer has a likable personality, so when watching him as Carson, a condescending, unappreciative,  egomaniacal smart-ass, you can't help but kind of like the guy. His determination to succeed is a bit admirable.
Allison Janney really eats up the screen as Carson's pill poppin', wine gulpin', recently-divorced-and-very-pissed-about-it curmudgeon mother. She puts this character through the wringer without a hint of struggle - you will not be able to take your eyes off her. Sheryl gave up her life for a man, a man who would leave her years later with an ungrateful asshole of a son (Carson). "Some people get to come home to wonderful fiancés and sonograms. I get a smart ass kid I never even wanted in the first place," she tells Carson when he comes home from school and says something snooty to her while she tries to have a friendly conversation with him. Life handed her lemons, so she fermented them and gets drunk every chance she gets. Janney's poignant performance as Sheryl is perfect.
When not serving as the film's comedic punching bag of fat jokes, Rebel Wilson's iota of screen time sprinkles a few laughs as Carson's sidekick. Considering how funny she is, it's palpable she wasn't given much to work with. This is unfortunate, because the girl has excellent comedic timing. If you really want to see her shine, watch Pitch Perfect.
Unlike Heathers, a cult-classic dark high school comedy that deals with teen death, Struck by Lightning is supposed to be a feel good movie. There's a moral behind it and by the end, characters are supposed to have changed and we're supposed to appreciate them for their shift in attitude. But if nobody changes and everyone is just as sad and mean as they were when we first meet them, does it defeat the whole purpose of the story? If the moral is "there is no moral, people don't change," director Brian Dannelly did not make that clear.
There are two moderately funny cameos by two very funny comedians: The Office's Angela Kinsey as a counselor who doesn't know the first thing about counseling, and Party Down's Ken Marino as a doctor. In hindsight, their involvement should have been the backbone in making this movie a cult hit. Colfer did a solid job writing this film at such a young age (he's only 22), but the script needed more chutzpah so these comedians (Wilson included) could do what they do best: make us laugh.
One thing is for certain: Janney's striking performance makes this movie worth a watch. I keep thinking about Sheryl. With a little bit of her mind left intact, she's lost everything: her husband left her, her mom is practically brain-dead, and she just lost her son, who she had a constant battle with just trying to get him to love and appreciate her. If the focus of Struck by Lightning would have revolved solely around her, this movie would have been powerful. She gives this movie legs. The Academy needs to give her an Oscar, already.
Struck by Lightning opens in limited release in U.S. theaters on Friday, January 11.
(Follow Chase Whale on Twitter.)
Sign-In to Vote
Tweet 0 Submit

Do you feel this content is inappropriate or infringes upon your rights? Click here to report it, or see our DMCA policy.
Allison JanneyChris ColferChristina HendricksDermot MulroneyRebel Wilson

More about Struck by Lightning

There was a claim made in the trailer that I see is repeated at the top of the poster, although not very visible in this image here: From the creative mind of Chris Colfer. What screenplay doesn't come from a creative mind? He has also written a couple of books, but he's by no means prolific. Who is the marketing department trying to impress?

That's an excellent question, Michael. I feel like the marketing company is riding off Colfer's GLEE fame, and that's why they making it more colorful with that quote. It's kind of silly since he doesn't have much of a background.

See this just for Janney's performance. She owns it.