Review: MATRU KI BIJLI KA MANDOLA Mixes Politics With Romance And Does Justice To Neither 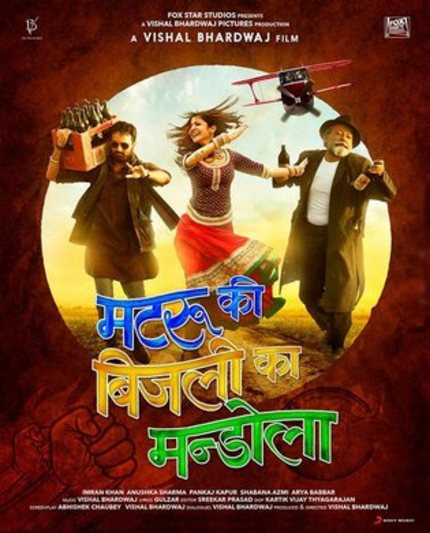 Each new film from Indian auteur Vishal Bhardwaj comes with a lot of baggage, but that's by design. Bhardwaj is not only responsible for directing some of the most audacious films of the last decade, but he is also, perhaps foremost, one of India's most in-demand composers and writers as well. When the urge strikes him to make his own film, he wears all of these hats at once, making the film's success entirely dependent upon him -- a tall order for anyone.

Sometimes this works, as in his universally acclaimed adaptations of Shakespeare's Othello, Omkara, and his MacBeth reworking, Maqbool. Other times, however, he's not so universally loved, as was the case with his last film, 7 Khoon Maaf, which divided critics, though I was on his side that time. His latest venture, the rom-com (romantic-communist) tale, Matru Ki Bijli Ka Mandola, is another that is likely to split critical opinion. Even I'm less inclined to forgive this time around.

The title comes from the name of the three main characters. First we've got "Harry" Mandola, played with relish by Pankaj Kapur. He's a wealthy industrialist attempting to crush a local farming village in order to build the city of tomorrow on their farmland. Then there's Bijli, his free-spirited daughter who is an apparently ditzy socialite cum freedom fighter played with the usual bubbliness by personal favorite, Anushka Sharma. And finally we have Matru, Harry's personal valet who turns out to have more up his sleeve than he lets on. Imran Khan plays him with a strange, icy demeanor. The three weave in and out of trouble with one another through situations which alternate between serious and ridiculous.

Mandola is trying to marry his daughter off to the son of a local minister (the lovely Shabana Azmi) in order to solidify his business ties. But the potential bridge-groom is a total douche, and, predictably, Bijli ends up falling for the scruffy Matru. Matru, meanwhile, spends his life wrangling his boss, who is the worst kind of drunk -- the schizophrenic kind. He's a friend to the people when loosened up, and an iron-fisted monster once sober. Matru attempts to use his leverage as Mandola's long-time servant to help the local farmers keep their land, and also to aconvince his boss that it's the right thing to do. More often though, he simply acts as his partner in drunken crimes.

While there is a lot to like about Matru Ki Bijli Ka Mandola, it feels too disjointed for me to give the film a solid recommendation without a few warnings. Like many Indian films, MKBKM is incredibly tonally inconsistent. The narrative swings from broad comedy relating to Mandola's problem with alcohol and his hallucinations, to hard hitting political commentary regarding people's rights to their own land and the increasing popularity of Communism as a solution to political corruption. It is in the lighter moments that the film really hits its stride. MKBKM features an amazing performance from Pankaj Kapur, who blows away his co-stars with an enormous amount of charisma. Sharma and Khan hold their own, but most of their finest moments are shared with Kapur, who is, quite simply, the overwhelming force in the film.

Apart from the normal problems with the film's tone, there are also some really distracting moments of unearned high camp. The one that sticks with me is a moment in which Shabana Azmi and Pankaj Kapur are fiendishly plotting the demise of this poor little town (surprisingly, not while twirling their mustaches) as a rain storm approaches. The moment is so rich with hokey symbolism that it is almost laughable. These moments pop up from time to time, chipping away at some of the gravity of the film's message, which Bhardwaj seems desperate to impart. His previous film, 7 Khoon Maaf, seemed eager to exploit that camp element as well. However, the film's premise kinda demanded it, and so he was able to use it appropriately. This time around it just feels like it fell out of another, lesser film.

The essential story line of the film revolves around Matru leading the local villagers in an uprising against the evil corporate monster, yet very few of these villagers are even given names. For a film that appears so eager to give a voice to its cause, MKBKM seems uninterested in utilizing the same kind of egalitarianism in its own script, instead turning a story about "the people," into a star vehicle for its three headliners. It's the same kind of hypocrisy that allows Bhardwaj to throw in a joke about a rich Indian importing an entire African folk dance team for a laugh, and then utilize that very dance team to add exoticism to every musical number in the film.

As much as I enjoyed some of the running gags and the lighter moments in MKBKM, the overbearing nature of the political message made it less enjoyable and slowed down the film's momentum at all of the wrong moments. I was really looking forward to this movie, and I certainly don't regret it being my first Indian film of 2012, but it just wasn't great like it could have been. Matru Ki Bilji Ka Mandola is a miss from Vishal Bhardwaj. Better luck next time.

Do you feel this content is inappropriate or infringes upon your rights? Click here to report it, or see our DMCA policy.
Anushka SharmaBollywoodImran KhanMatru Ki Bijli Ka MandolaPankaj KapurVishal Bhardwaj