For Your Consideration: THAT'S MY BOY 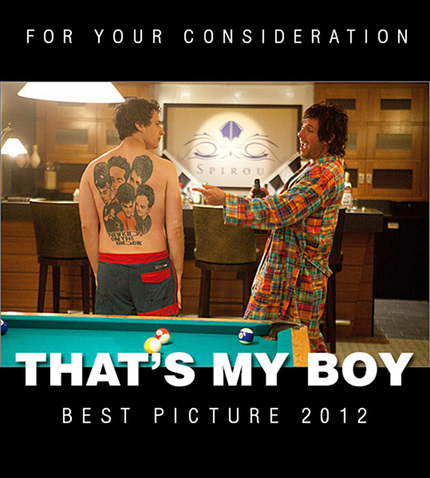 I'll begin my case for the Adam Sandler raunch-fest That's My Boy by referencing one of the greatest movies ever made, and one which has probably been often used to defend what's perceived as low-art many times before -- Sullivan's Travels.

In that classic, comedy director John Sullivan becomes embarrassed about his low brow comedies like Ants in the Pants (a potential title for a Sandler movie if there ever was one) and goes out to live among America's homeless so that he can direct a more "serious" effort for the common man, O Brother Where Art Thou? As is prone to happen to a penniless hobo, Sullivan ends up in jail by the end of the movie, spending more time than he bargained for with the lower rungs of society. But it's here where he finally actually learns something. When all of the men, condemned to a life of labor and little hope, gather around for the rare movie night in prison, he suddenly see's their faces light up with joy, hope and most of all laughter.

The movie being shown is not some Steinbeck-esque realist piece about the plight of the worker, nor is it an overdressed period piece based on an epic novel -- it's a cartoon with characters running around hurting each other -- as low-brow as it gets.

Well, as low brow as it got then. Now we have That's My Boy. Trying to argue empirically that it's actually a funny movie is like waging war on windmills, so I'll leave that to the contrarian critics (of which there have already been several). I'll just say that I found that the movie hit more than it missed, and several scenes -- especially the repeated response to a story Sandler makes up involving a burrito -- still make me laugh when I think about them.

But moreover, it was refreshing to see such an unapologetically class-conscious comedy after the genre had all but died out. Like Cluny Brown, My Man Godfrey and Midnight, That's My Boy is as much a critique of bourgeoise existence and the relentless pursuit of money, status and manners, as it is a gross-out comedy, or, if you want, a father-son bonding story. That it takes this satire to its Victorian extreme by bringing upper-class incest into play is honestly kind of inspired and brilliant.

No, it is not as good as any of those aforementioned classics -- the typically awful roles for women keep it from even coming close -- but it's the first time in a while I've even been able to use those movies as points of reference.

It is "morally reprehensible."

As I went through reviews for That's My Boy in preparation to write this, I realized that not only did most critics hate this movie, they were actually offended by its existence. The word "morally reprehensible" and "deplorable" came up over and over. I suppose the reaction mainly stems from the fact that it opens with a thirteen year old boy having sex with his hot teacher at her insistence, and loving it.

Fair. But this makes it perfect company for this year's likely Oscar nominees! Let's take a look. We've got Zero Dark Thirty, about which New York Magazine's David Edelstein has already said, "As a moral statement... is borderline fascistic." Then of course their is Django: Unchained, which besides its use of that N-word, has taken some flack for reducing yet another historical tragedy to a violent, Junior High revenge fantasy (which, as a comparison to reviews of the Sandler movie shows, is still not as a bad as showing a sexy junior high fantasy). As far as it goes, attaching extreme moral judgements to movies is a shaky business at best. As Andrew O'hehir wrote a very good article on the Zero Dark Thirty controversy, "Art can be created with moralistic intentions, but it is inherently a ruthless and amoral endeavor, whose meaning always gets away from its creator." Of course, he too called out Sandler for making a comedy about "a rape survivor."

Anyway, if we're going to nominate the second and third most morally controversial films of the year, let's include the king as well.

It cops out at the end

Several critics, as if not wanting to find anything at all to like about Sandler's movie, complained that the ending of the movie is too sentimental after the raunchy, take-no-prisoners humor that preceded it (which they also didn't like). Fine. But you know what other movie this year did that? The Silver Linings Playbook. In that film, we somehow we go from an edgy, honest, chaotic comedy to a feel-good dance contest right out of Little Ms. Sunshine with all of the emotional and financial considerations of the characters riding on the outcome. It is more predictable, more cliche and just as phony as the route that Sandler navigates in the third Act of That's My Boy... and it will likely receive Oscar nominations. So for the sake of fairness, consider That's My Boy!

The performances are, yes, outstanding.

The Academy just loves it when actors play against type. Well, here is Andy Samberg in a role that, for the most part, gives him no jokes. For two hours he simply has to express annoyance at Sandler without actually acting out against him, which is a pretty impressive (and hilarious) feat, given Sandler. And then there's Vanilla Ice. I'm not positive what his "type" is these days, but I'm pretty sure it's not the genial, party-loving, good-hearted fast-food stand worker that he plays in That's My Boy. Bonus points for the scene where he lies down, drunk and pees up in the air saying, "I'm a fountain!"

As for Sandler, Owen Gleiberman at Entertainment Weekly has already wrote up a quote tailor made for an Academy screener:

Sandler, make no mistake, doesn't phone it in. He delivers every single line with the unspeakably annoying rasp of a rusty nail scraping on your brainpan. He also gives Donny what you could call a full range of moods: angry, irritated, pushy, noodgy, grasping, wheedling, whining. A real charmer. Just to make sure we know what kind of role model Donny is, hardly a scene goes by in which he doesn't have a Budweiser in his hand, and the vulgarities, too, spew out of him like beery foam. A lot of actors, by now, have learned to do a Boston accent, but Sandler gets something else: the blinkered, bellowing high dudgeon of a certain kind of in-your-face proletarian slob whom you can still find hovering in Boston sports bars. He makes Donny the Joe Six-Pack from hell.


It should be a lot shorter.

That's My Boy, somehow, runs nearly two hours. Some of its scenes are admittedly pretty bad, especially a bachelor party scene that goes on forever (though I didn't find any of them much more embarrassing than the ham-fisted opening scene to Lincoln). So we'll go ahead and disqualify it from any editing awards. But actually, the Academy loves overlong movies! Most of this year's Oscar darlings are way too long, and many (I'm looking at you again, Lincoln) do that annoying thing where they find a perfect place for an ending, then keep going for fifteen minutes. That's My Boy continues this time-honored, prestigious tradition, so how about a little recognition? Actually, by Academy Awards standards, maybe it should get an editing nomination.

It's time for a change.

After the Academy spent last year honoring a movie that chronicled the troubles of a king (possibly the least relatable protagonist of all time), how about one that actually attempts to speak to the masses? I'm not saying that Sandler's character, a broke, alcoholic loser who just wants to connect with his estranged son, perfectly exemplifies the American everyman, but it's a hell of a lot closer than a fucking king. It is also closer than a president or other high-ranking government employees from Argo or Zero Dark Thirty.

Like Sullivan, Sandler also attempted a high-art detour with movies like Punch Drunk Love and, I suppose, Funny People, but now he's gone back to slumming it, at least in the eyes of the critics. But with That's My Boy, he's completely owning his baser sensibility without apologies, and once again, reaching not to the cultured, refined sensibilities of critics and elites, but to the masses, who presumably have more pressing things to worry about than the moral territory of movies. I'm not saying it's a better movie than all of the self-important pictures that will inevitably get nominated, but it is just as honest as those movies, if not more so, which is still the most commendable thing I can say about a movie.

Do you feel this content is inappropriate or infringes upon your rights? Click here to report it, or see our DMCA policy.
adam sandlerbest picturefor your considerationoscarthat's my boy